Can you let go of a shield without doffing it?

One of my players has a (unknown to him) evil hand. I want to work out what the mechanical implications of that evil hand letting go of his shield would be.

Shields take an action to "doff", i.e. stop receiving the benefit of the shield (2 AC for basic shields, other effects for magical shields).

In the previous question it was discussed that "donning" a shield involves something beyond just picking it up - most likely strapping it securely to your arm.

What this might actually look like in physical terms: Having donned the shield by strapping it to your arm, you let go of the handle you're holding, leaving the shield still strapped to your arm (but likely now much less useful against attacks). Your hand is now free (although your arm isn't). It might be able to do things like touch a holy symbol on a necklace, or grapple someone. Then it might be able to without an action (free object interaction?) start holding the shield again, giving you the AC benefits back.

As you can see in the photo, letting go of the handle is insufficient to free the hand, nor is it likely to cause the shield to move. Some shields have two straps and a handle making it less likely to move if you release your grip. This makes your arm instead of your hand absorb the impact on the shield.

Also by RAW, there is no mechanic for a half worn shield, it is either on or off, and requires an action to change state. 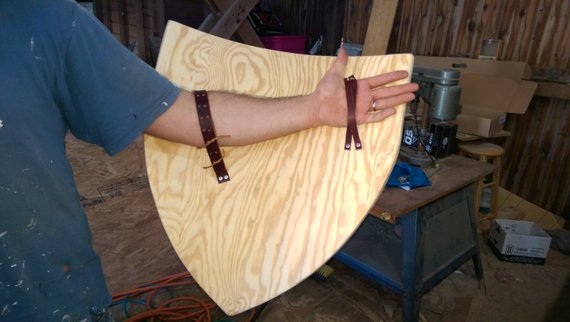 In order to have a free hand, you must first remove the shield by Doffing it and spending the Action to do so.

The shield is on, and you have no free hand, until an action is spent to remove it. It's binary and takes an action to change state so that you do have a free hand.

Due to this, you will not be able to use the hand that is wielding the shield in any way until you have doffed the shield.

Comparing against Picking up a shield

The difference in your linked question is that you are simply picking up an Object that happens to be a shield. You are not donning a Shield.

Once it is a worn Shield, it is no longer a generic object, but a Shield with mechanics on how to remove it.

Donning a shield grants a bonus to AC and occupies the hand. Of course, a player can narrate that their character "lets go" of a donned shield - but it has no mechanical impact. The shield remains donned (and the effects persist) until an action is spent to Doff the shield.

In the case of an evilly possessed hand trying to interfere with its biological owner, a DM could reasonably rule that while the hand cannot doff the shield, the hand can choose not to wield it effectively - acting as if the character had no shield proficiency. If a character wields a shield without proficiency, the character still benefits from the armor bonus but suffers disadvantage to attack rolls.

Yes, you can stop holding (as in release the grip of) a shield

Nothing in the game can prohibit a character from doing something the player says he does so long as the character is capable of such an action. It is certainly possible to release your grip from a shield (aka Step 1 in doffing a shield!)

The moment you release that grip, though, I would argue the shield is no longer "donned" as the rulebook understands it to be. To gain any/all of the benefits of the RAW you have to adhere to the requirements of the RAW. Releasing a shield does not adhere to those rules (it is no longer being carried, PHB p144), and thus the player should forego the benefits of a donned shield.

Let us also make a distinction that if one "stops holding" a shield that doesn't inherently mean it falls to the floor. The shield (depending on the specifics of how it is made) may be strapped on, and releasing your grip probably shouldn't be a replacement for doffing the shield since that explicitly takes one action per RAW.

And that's all the rules can help us with

From here, then, you're in DM interpretation territory. Your character has released their grip on a shield. It isn't donned (benefit-granting shields are carried), but it isn't doffed (you've not taken a full action to remove it), and we have no written rules for half-donned armor, which is effectively what your unsecured shield has become. What you want to do with your hand and how long it might take you to regain the benefits from truly wielding the shield again are left to your DM to decide.

On that note, I would urge DMs to allow very little use of that hand (pointing, thumbs up, high fives) and still require the full action to re-don the shield. Even so much as allowing for another item to be held could introduce balance problems. In the end, don't allow "letting go" of a shield to become inherently more beneficial than donning/doffing it.

Not the answer you're looking for? Browse other questions tagged dnd-5e shield or ask your own question.

14
Can you hold a shield without donning it?
11
Can you use the hand Wielding a Shield to hold another object?
4
Can you don or doff a shield with one hand?

11
How long does it take to equip a shield?
18
Can I wear a shield and fight with a two-handed weapon?
14
Can you hold a shield without donning it?
4
Can you don or doff a shield with one hand?
3
Can I touch something with a hand that is holding a shield?
14
How does the Thief's Fast Hands feature interact with mundane and magical shields?
5
Can I benefit from a magic shield while holding it without my hands?
5
With only one free hand, can I still cast spells with somatic components?
3
Can you pick up an item on the ground without a free hand?
2
Is this homebrewed shield weapon balanced?