Purchased this die from a hobby/tabletop store yesterday, mainly because I thought it looked cool, and that it was funny that it was so hard to read the faces: 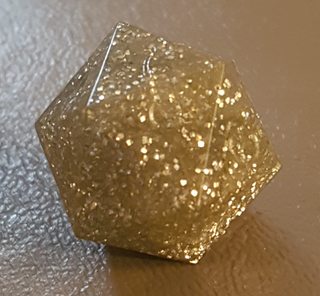 I was passively rolling the die, and noticed that my rolls were all very low. Checking the faces, I found that this was actually a d10 with twenty sides and two instances of each number, 0-9.

Is there a name for a die like this? Would I be able to purchase another, possibly with sides 10-20?

Gamescience, a dice manufacturer, calls such a die simply a d20 0–9 Twice. Yours appears to be this one, and, as of this writing, it appears you can buy more.

However, you may not need to. The owner of such dice usually colors in at least half the numbers himself—wax crayons used to be included with dice sets for exactly this reason, but paint or, I guess, even nail polish works, too—so that to generate a number from 1 to 20, the roller picks either the colored-in or uncolored or differently colored numbers as high. That way an uncolored 0 represents 10 and a colored-in 0 represents 20, for example, and, of course, rolling the same die twice generates a d%.

As noted in another answer, this is currently called by GameScience a d20 0-9 Twice. Historically, this is what d20's looked like before the invention of the proper d10. (Note that Platonic solids are only possible with 4, 6, 8, 12, or 20 sides, and these are the entirety of what early dice sets contained.) Indeed, common usage would be to color half the faces in a distinct color to indicate values above 10. Thus, the one die could be used as a d10, d20, and d%. Some old-school gamers still prefer them for perceived elegance and efficiency in this way.

Non-platonic solid-shaped dice are available in some places. The most common of these is a ten-sided die numbered 0-9. As with the d20, this can be used for many purposes, even replacing the d20 if a second die is used in conjunction to get 5% interval curves (1-20). Also, the die can give 0-9 linear curve random numbers, as the d20 can.

You might also want to watch this informative video by Jon Peterson on the history, manufacture, and how to identify different brands of dice from the 1970's (noting that everyone made d20's with a single digit per face until TSR started doing differently in 1980). Jon says that in the early 1970's some people called these decimal dice or deci-dice (at about the 3:40 mark of the video).

Others have said what Gamescience calls these. Personally I refer to them as a 20 sided d10. I'm sure if you said that to someone in a dice shop they'd know what you meant.

What my fellow old school grognards said. Its called a d20. Since nowadays d20s are numbered 1 thru 20 instead of 0 to 9 twice, different folks call it different things. There is no official name, since it is officially a d20. As noted, GameScience has taken to calling them "d20 0 - 9 Twice." But technically this is still a d20, it's just numbered differently than you're used to. There is no technical name that differentiates it from a d20 numbered 1 - 20.

Not the answer you're looking for? Browse other questions tagged dice terminology product-identification .

36
How do I read a 4-sided die?
43
Is there a name for the standard 7-die set?
11
Is this die from an RPG?
2
What's the name of this dice set with blue letters on red-and-black?
53
Is GameScience's non-cylindrical seven-sided die a balanced/fair die?
2
What homebrew dice mechanic can I use for PvP in Amazing Tales?
28
What game uses yellow 20-sided dice with letters and arrows?
31
Help me identify these 20-sided dice with assorted numbers from 4 to 72
5
Is there a single hundred-sided die for 2d10 (aka d10+d10) rolls, numbered 2–20?