Expected damage of a moonblade with N runes?

As noted in David Coffron’s answer to another question, the moonblade (Dungeon Master’s Guide, pg. 217) has no fixed limit on how much damage it can do: there is no stated limit to the number of runes on the blade. It states:

A moonblade has one rune on its blade for each master it has served (typically 1d6 + 1). The first rune always grants a +1 bonus to attack and damage rolls made with this magic weapon. Each rune beyond the first grants the moonblade an additional property. The DM chooses each property or determines it randomly on the Moonblade Properties table.

Some of the items on the table include:

91–92: When you hit with an attack using the moonblade, the attack deals an extra 1d6 slashing damage.

93–94: When you hit a creature of a specific type (such as dragon, fiend, or undead) with the moonblade, the target takes an extra 1d6 damage of one of these types: acid, cold, fire, lightning, or thunder.

But as David notes in a comment, some runes have limits on how many times they may be gained. That means, once the moonblade has gained these runes, it cannot gain them again, and the odds of gaining the remaining runes—including the quoted damage-improving runes—improves in the future.

So then, assuming that each rune is determined randomly per the table, rerolling any rolls that result in a rune that would not stack with the runes already on the moonblade, and that the creature-type-specific runes are distributed evenly among the creature types (feel free to assume fractional runes for that purpose), what is the expected value of the damage roll of a moonblade with \$n\$ runes? Assume that the hit has already taken place, so changes to the weapon’s accuracy, such as making it finessed, or that make it easier to target enemies in the first place, such as making it thrown, are irrelevant. Also, absent any information about the target, ignore the damage benefit that vorpal might have. The best answer would include the chance of a critical hit, including the possibility that the critical threat range has been doubled by the relevant rune.

Do not assume any GM intervention limiting the moonblade or otherwise making any particular ruling here: instead use a rules as written interpretation of the text.

I wrote a python script to calculate answers accurate to several decimal places. I created a Moonblade object, and added a specified number of runes just as the rules suggest (with the one alteration you made that you always re-roll non-stackable properties). It then calculates the expected damage from this moonblade taking into account all bonuses, bonus dice, critical hits, creatures, etc.... I made a couple of assumptions beyond what you have explicitly stated. 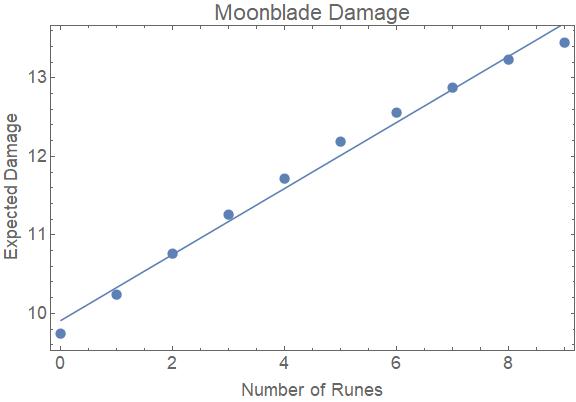 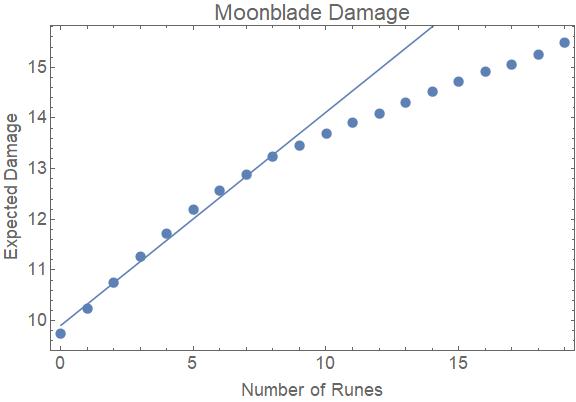 If we extend to a truly absurd number of runes, we see a transition to another linear behavior. I think this is because the dominant factor in the damage is the steadily growing number of d6's added to the roll. Because all other runes eventually stop stacking, in the end, all we can do is add another d6 for each rune, meaning we either add 1d6 to the damage, or add 1d6 to the damage for a particular type of creature. After adjusting to account for critical hits, this averages out to about 2.07 damage per rune, which is what we expect the slope to eventually be. Therefore, for large numbers of runes, the expected damage is calculated as \$\overline{d}\approx-93.24 + 2.07 n\$ 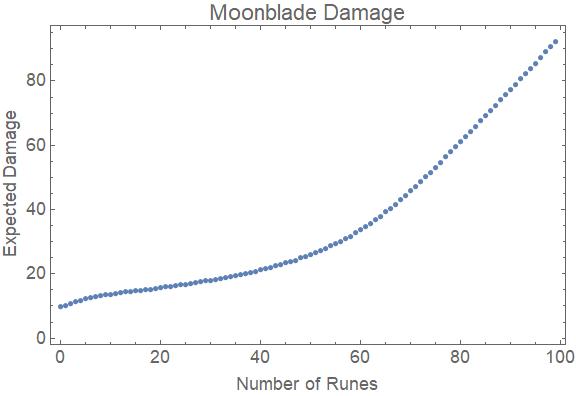 Put into a very simple equation, the average damage of a moonblade with n runes can be roughly calculated as base damage + 0.47n + 1.

This doesn't involve probability at all, I calculated the value 0.47 by using a calculator I wrote to roll runes on a moonblade over and over (anywhere from 5 to 5000 runes per moonblade), calculated the average damage increase per rune, and repeated this process tens of thousands of times to get as close to the statistical average as I could.

This calculator confirms that as the sample size (number of runes) increases the average damage increase per rune approaches 0.47.

The calculator operates on the following rules:

My calculations do NOT take into account factors such as increased crit chance, the vorpal blade, the finesse property, different creature types, etc.

I understand this isn't quite what you were looking for, especially since it doesn't take into account the increased critical chance, but it's a baseline approach if you needed to do a rough calculation.

Not the answer you're looking for? Browse other questions tagged dnd-5e magic-items damage statistics or ask your own question.

2
Do these Healing items for the cleric stack when she uses her healing powers?
7
What is this aura and cost for this melee rogue magic weapon?
4
Does War Ring maximize all critical damage dice or only the dice it adds itself?
14
Would a PC deal 1d6 extra fire damage with a Cambion's spear?
4
What damage does the manyfang dagger multiply?
13
Does the vorpal/defender rune also give a +X attack/damage bonus to a Moonblade?
11
Do you roll an extra damage die for Hex if you crit with one beam of Eldritch Blast?
0
What is my average burst/nova melee damage and how do I calculate it?
11
Does a Spores druid's extra damage from Symbiotic Entity apply to a creature hit by the secondary damage of Green-Flame Blade?