After a discussion with my GM for our Star Wars Saga edition, I'd like to get a seeing eye droid to help convince my party and NPCs that my Miraluka is actually a blind human. But as I was informed the smaller a droid gets, the more credits it costs.

I don't want a giant protocol droid, as there is one in the party and I'd like to have something slightly different and avoid conflict. Almost like a skull servitor but for Star Wars, the size of a training droid: 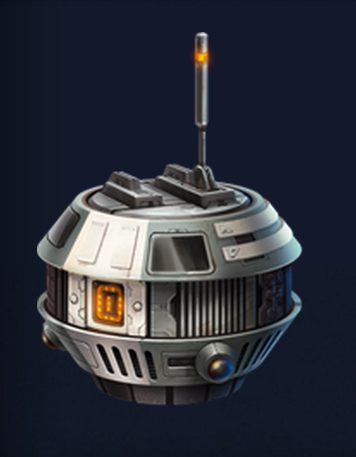 For bonus points, it doesn't need to actually be reliable, as my character isn't really blind!

Overall though, I was wondering how could I stat an affordable (sub 1K creds) droid to help read for me, and keep my cover.

The GM's call, of course, but I would assume a droid capable of carrying simple conversations and noticing / keeping track of details in a character's life "from tastes in food and culture to the amount of fuel left in a speeder" could (or could be modified to) perform the comparatively simple task of using OCR to convert text-to-speech.

The thing I'd suggest is that while "smaller is more expensive", most droids have a ton of features. What you could look at is a restriction of features to a very limited set:

1) Locomotion; just enough to get around. You want flight, probably. 2) Vision; but not super duper vision, just like a cheap digital camera 3) Reading; doesn't have to be super precise, could function like OCR

What you want isn't a droid but a robot with a small feature set.

While I don't remember an in-universe price for something like this, it's the sort of thing that should be cheaply available for a number of reasons;

The equipment required to make a flying drone that can read text already exists; take an Android phone, do what some people have done to allow them to use it like a RC helicopter (or rather strap it into a RC helicopter), and use Google Goggles. This is maybe a little beyond the current technological norm, but it's not too far; it's just a question of letting it do the RC helicopter controls and Google Goggles automatically, which is definitely a possibility in Star Wars. I mean, you could get it done today for less than $1000 for all the components, though you'd probably need custom software, so I'd go to your GM and point this out and say "Star Wars tech could do this easy and cheap!".

Not the answer you're looking for? Browse other questions tagged star-wars-saga-edition .

5
How much does a custom droid PC pay to have extensions in its locomotion systems?