How to represent multiple stories of a building on a battle mat?

How do you set up a two-story battle map when both stories can interact with the same areas or characters? For example:

I considered making a separate battle grid for each building level, but where would I put them? The only thing I can think of that would work is to build some kind of scaffold to put the upper level grids on and suspend them above the floor-levels, but that sounds pretty time consuming, especially for structures with multiple levels, like a pirate ship.

Often in these case you actually don't need to represent areas that are vertically above each other at the same time at all. Not always, but often.

These days I mostly use theater-of-the-mind, with maybe a few sketches to show building layout, which of course avoids the problem altogether. But based on what I learned from when I was using battle-maps, it is worth remembering what the map is actually giving you.

It gives you precise locations for purposes of knowing about the PCs:

Notice that I bold the PCs; there is no need to represent stuff about NPC-NPC interaction on the map; since precise information about it will not be known to the PCs except as the last point.

So with that known, you can avoid showing some locations on the map and draw from what we do in the theater of the mind world. Descriptions. You can describe things like "You can hear what sounds like maybe 5 or 6 guards strapping on armour and cussing inside the gate house. Might only be 3 but if so they are loud."

To illustrate with some examples.

Until monsters get inside the walls, you never need to show the melee fighters being below the archers -- if they are engaging with the monsters are the same time as the archers then they must be in-front of the wall (the archers can not shoot directly down through there floor/roof) 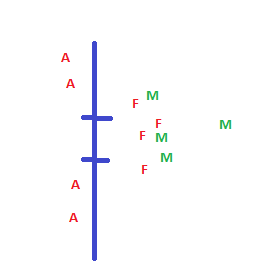 Then once the monsters are inside the walls, you don't need to represent the archers on the outside at all anymore. Just draw the inside of the fortification -- remembering to include the stairs and ladders where the archers will emerge.

An adventurers’ ship is being attacked by a kraken. Fighters and wizards on deck attack it while crew members below deck operate cannons or the like.

Here we don't need to represent below deck at all.

If a PC is operating the cannons below deck, just don't show the below-deck area at all.

To address the issues from before:

When I DM in person with my players, if the maps are small enough I'll draw them both on the same mat (or in some cases, the same whiteboard), and just number the stair cases or ladders so they know where they go to. If both levels are larger than your mat, then what I do is redraw it once 1 person goes up to the next floor, and if they want to know something about the previous floor, I show them my copy of it.

There's a couple things you can do with Roll20. You can change the page size to be able to fit multiple maps on it, or you can create a new page with each floor on it. For the first method, you can cover the map with the Fog tool, then reveal the next floor once someone wants to go to it. For the second method, if you click the button in the top right, you can then drag individual players, or the whole group to another sheet. Using that, you could have say 3 of the party on the 1st floor, while a single one scouts ahead and relays what he sees over text chat or voice chat, without the other players seeing it.

With Roll20, by using different pages, you can still have outside of the tower (ie, where the Kraken is or where the archers can see) showing, you'll just know that the inside of the tower is above the ground level. The only hassle with this is, if something happens outside, you'll have to mirror the changes on each sheet. If you have something where all the maps are on one large sheet, just number the sections and have a separate area for the outside. A grid system with letters or numbers could help line this up by marking them on each map section to know where they line up with the corresponding outside section. That same can be done with Battlemats.

Another in person solution could be to use multiple printouts. Have a larger base one with the outside area, then smaller ones you can place for each floor on top of the current floor. That way, you'll have layers you can go through. This won't work as well if you have players on multiple floors, but I would just space the papers out then, then stack on top of any of the no longer used ones.

Not the answer you're looking for? Browse other questions tagged battle-map or ask your own question.