What space does the spell Cloud of Daggers fill?

I am trying to workout what template cloud of daggers (PHB, p. 222) would be on a grid. The spell states:

You fill the air with spinning daggers in a cube 5 feet on each side, centered on a point you choose within range.

So does that mean it would look like this:

From what I've read online, there seems to be some suggestion that it is a single square (tile) though this does stack with the spell description of "a cube 5 feet on each side".

Clearing this up for my group would be great, and I am sure our DM will be pleased as his monster were nicely diced by this spell. Thanks.

Neither of the options that you show are correct. The spell description states that it takes up:

a cube 5 feet on each side

Since one square is five feet by five feet, you can fill one square with the cloud. If you target the center of a grid cell, then the spell fills that entire grid cell.

Looking at the section of the PHB "Areas Of Effect" we see:

The other way to look at it is if a point can have a side then it - spell has a 5ft radius. This is why I have asked this question.

Which suggests you are thinking of spheres and cubes as being similar areas of effect. When we're dealing with a 5 foot cube, there is a sphere that could be considered to be almost identical in effect, but it would have a 2.5ft radius, or a 5ft diameter. Of course, when the areas we're dealing with get bigger, the similarities decrease.

Take the image below: 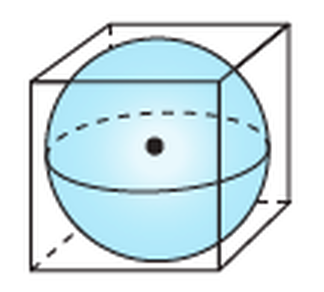 The point indicated is at the center of both the cube and the sphere, and the length of one side of the cube is equal to the length of the diameter of the sphere (but the radius is only half that). While the sphere fits entirely inside the cube, there is plenty of space taken up by the cube that lies outside of the sphere's bounds. When using a 5ft grid, as the sphere/cube get larger, more and more spaces are effected by this difference, which is why I said "the similarities decrease."

If we were to say that the cube is 5 feet on each side, it would fit nicely inside one 5ftx5ft tile on a map. The area of effect of the sphere and the cube would be effectively the same if we consider that everything snaps to a grid: either one would completely effect one creature, and only one, as creatures can move through eachother's space, but not stay there.

How does this effect Cloud of Daggers?

As you said, the spell states:

You fill the air with spinning daggers in a cube 5 feet on each side, centered on a point you choose within range. - PHB pg.222

Usually you select the point of origin, which can be included in the effect or not, but in this case we select the center point, which must be within the area of effect. From this, we can see that a cube 5ft on each side could fit perfectly within one tile of a 5ft grid.

we play with the notion that when you select a point you are select a square rather than a location on the grid which could cross into another square or in the middle of two.

Which sounds like snap-to-grid, so you couldn't place the cube on the intersection of two tiles as addressed by this question.

The square takes the following area on a grid: 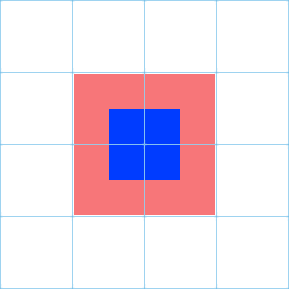 Image 1: Cloud of Dagger in blue, affected squares in red.

From the rules as written, it cannot take any other shape on the grid.

First, from the DMG page 251, regarding areas of effect:

The origin of the Cloud of Dagger spell must be an intersection of squares.

Additionally, from the description of the spell:

You fill the air with spinning daggers in a cube 5 feet on each side, centered on a point you choose within range

Hence the square is centered on its point of origin - which means it occupies the four squares around an intersection of squares.

Not the answer you're looking for? Browse other questions tagged dnd-5e spells area-of-effect battle-map or ask your own question.

3
Can Create Bonfire be placed in a way that affects multiple squares?
11
How many enemies can I hit with a Cloud of Daggers?
6
How does the size of a cube area of effect work?
3
On a grid, what is the area of effect of Spirit Guardians?

26
What does “when it enters the spell’s area for the first time on a turn or starts its turn there” mean?
10
Can Call Lightning be used for the full 10 minutes while running away on a ship?
18
Can two mages cast Wall of Fire in the same place?
4
How does orienting a cube-shaped spell work in three-dimensional space?
9
Does the Thunderwave spell push back a Cloud of Daggers?
6
Are these changes to the Thunder Step spell balanced as a homebrew spell?
4
If you center the Cloudkill spell on yourself, does the fog expand outward from you on subsequent turns?
7
In “Elves of Evermeet”, how does the “construction” spell work?
15
Do persistent area-effect damage spells break Compelled Duel?