Is a new Tumble check made for each threatened square?

Do you have to attempt a Tumble skill check for every threatened square you leave to avoid an attack of opportunity?

Was this ever clarified in any official capacity, directly or indirectly?

I know Combat Reflexes and Additional Attacks of Opportunity says that…

Sorry I should of added this from the 3.5 FAQ (I know, not always trustworthy, but should be considered):

For example, imagine Ember begins her turn 10 feet from an orc and wants to use Tumble to move through its space and end up 15 feet away on the opposite side.

• Her first square of movement wouldn’t provoke attacks of opportunity (since she’s not leaving a threatened square), so she doesn’t use Tumble or move at half speed.

• Assuming that check succeeds, Ember now moves from a threatened square (adjacent to the orc), which requires a DC 15 Tumble check and costs twice normal (or 1 extra square of movement). She’s now paid a total of 7 squares of movement.

• Finally, Ember moves one last square, ending up 15 feet from the orc on the opposite side from where she began. She’s not leaving a threatened square, so she doesn’t use Tumble or pay any extra movement. Ember has paid for 8 squares (40 feet) of movement, and has covered a linear distance of 5 squares (25 feet).

Emphasis mine. Doesn't this example imply tumble per threatened square. If not, all the tables I've played at have ruled incorrectly on this.

Tumble at one-half speed as part of normal movement, provoking no attacks of opportunity while doing so. Failure means you provoke attacks of opportunity normally. Check separately for each opponent you move past, in the order in which you pass them (player’s choice of order in case of a tie). Each additional enemy after the first adds +2 to the Tumble DC.

You make a single check as part of your movement if there is only one opponent threatening the squares you're moving through. If two or more enemies threaten those squares, you'll make on check for each enemy (not per square traveled) with a cumulative +2 to the Tumble DC for each enemy after the first.

Example: Your character were cornered by two enemies in a 15 feet corridor with each of them close to the walls and your escape route is behind them and your move speed is 40 feet. You can make a Tumble check DC 15 to move at half your speed and avoid the AoO from the first enemy and another Tumble check DC 17 to avoid the AoO from the second and cross the distance safely with your move action if you succeed in both checks. 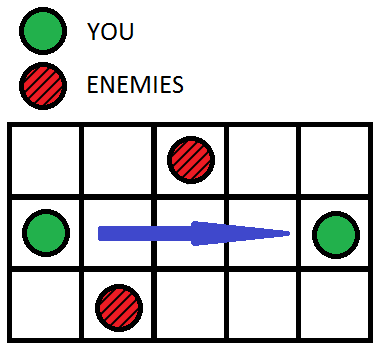 DC 15 Tumble at one-half speed as part of normal movement, provoking no attacks of opportunity while doing so. Failure means you provoke attacks of opportunity normally. Check separately for each opponent you move past, in the order in which you pass them (player’s choice of order in case of a tie). Each additional enemy after the first adds +2 to the Tumble DC.

(the DC 25 version is similar)

Note that Pathfinder changed the Tumble Acrobatics rules so you do provoke for every square—for every enemy. This quickly leads to an utterly preposterous number of Acrobatics checks, which can make rolling the appropriate checks for tumbling through a crowded combat take ages. For pure speed-of-play concerns, I recommend switching it back to the 3.5e rules, excepting perhaps the DCs involved.

Not the answer you're looking for? Browse other questions tagged dnd-3.5e skills movement .

4
How do I use acrobatics to move past foes and their threatened areas?
7
On a Tumble Check to avoid Attacks of Opportunity, do you move at half speed for your whole movement?
3
Is Acrobatics used in response to an AoO's intent or to negate it?
3
How many Acrobatics checks are needed to pass through a medium creature's threatened area via its space?

6
Attacks of Opportunity from moving within a threatened area?
8
AoOs against the same enemy on his turn?
10
Can a character take Attacks of Opportunity while moving without stopping?
3
Is "moving into the defender's space" analagous with "moving out of a threatened square"?
3
Does a Ninja using Light Steps provoke an attack of opportunity, and can it be avoided with Acrobatics?
3
What are these abilities that allow moving at full speed using acrobatics?
6
Are a blinded creature's squares as hard to Tumble through as a sighted creature's?
11
Does failing to tumble through an occupied space end your action?
7
On a Tumble Check to avoid Attacks of Opportunity, do you move at half speed for your whole movement?
2
Can you take a guarded step in difficult terrain