What's the probability curve of the D10 Storytelling System?

Recently a friend commented that he thought the dice pool in the d10 Storytelling System actually gave mediocre results, and that by increasing the number of dice thrown you were actually decreasing your chances of success.

I'm actually certain of the opposite, that by having more dice, the probability of getting 8-9-10 in one of them grows. However, I've carefully forgotten my Statistics lessons from college, and would like to know more. Can anyone put together an explanation of the statistics of the system, and maybe a graph?

If I understand correctly, you need at least one d10 to get 8 or more to succeed, yes? And you get more dice if you have more ranks/skill level/whatever, right?

In that case, the other answers are correct, but I'd also like to have a go at explaining this:

Here's a chart that does this same work for any number of dice from 1 to 10. 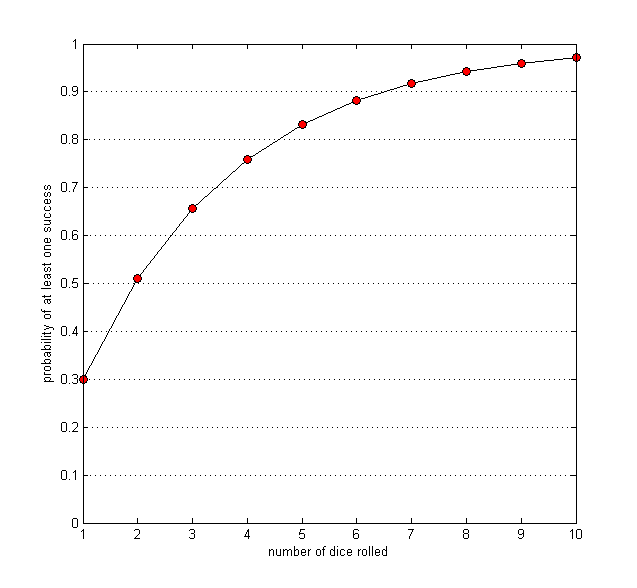 What your friend may be referencing is a quirk of the original World of Darkness rules, in which each one rolled cancelled a success, and TNs were the number needed for a die to count as a success. If the TN was very high (10 or greater) the more dice you rolled, the more likely you would be to roll more ones than successes, and therefore the higher the chance of failing the roll.

This is no longer the case with newer Chronicles of Darkness rules, in which the number needed for a die to be a success is constant.

As for a simple chart of the probabilities:

The probability of success definitely grows as you add more dice.

I've already commented but here's a quick writeup of the probabilities in case you don't find the other answer to your taste.

Adding dice, it actually becomes easier to determine by calculating the probabilities for 0 successes (which requires to calculate chances of 1-7 showing up on ALL dice, instead of trying to find the chances of having 8-10 on one OR two OR three... OR N dice which is just not practical).

Without going all math-y and starting to speak of geometric sequences and other nightmare-inducing terms I've forgotten, let's just say that the more dice you add, the further down the probabilty of 0 success goes => higher are your chances of 1+ success.

Of course, some rolls will require more than one success. For this, I'll refer you to the aforementioned other question.

Not the answer you're looking for? Browse other questions tagged chronicles-of-darkness-1e statistics .

27
How do I calculate my probability of success in Vampire the Masquerade?