For Whirlwind Attack feat what is a melee attack?

So to end with, could someone use WWA to use vital strike or POW strikes to every enemy within reach?

Benefit: When you use the attack action, you can make one attack at your highest base attack bonus that deals additional damage. Roll the weapon’s damage dice for the attack twice and add the results together before adding bonuses from Strength, weapon abilities (such as flaming), precision-based damage, and other damage bonuses. These extra weapon damage dice are not multiplied on a critical hit, but are added to the total.

The action term is key.

Strike maneuvers generally require you to use an action or a full action and as such cannot be used with Whirlwind Attack.

Strikes almost always require a standard or full- round action. Most involve a melee or ranged attack as part of completing the maneuver. If the attack hits, your opponent takes normal melee or ranged damage, as well as suffering the effect of the strike. When making a strike, you use your base attack bonus, all attack and damage modifiers, weapon damage, and so forth, as normal. You can make a critical hit with a strike, but you do not multiply extra damage from a strike when calculating the critical hit damage. It is treated just as extra damage from another special ability would be (like deadly strike damage or damage from a flaming weapon).

It can be any sort of melee attack you want

For example, you could attack two enemies with a sickle in one hand, attack sixteen more with a scorpion whip in your off-hand, and then make an unarmed strike with your head against another.

If you were holding the charge for a touch spell, you could even attempt to use that as part of a whirlwind attack, possibly even multiple times if you initially missed.

Some spells-- like produce flame, as well as feats-- like Quick Reposition, give you expanded options for things you can do as a melee attack. These options are also available as part of a whirlwind attack, because they consume melee attacks rather than more traditional actions.

The things you are suggesting, though, aren't melee attacks

Vital Strike is a specific standard action you can take. You cannot take it instead of or in modification to a melee attack.

Path of War, as far as I can tell, offers no strikes that can take the place of a melee attack, but rather strikes take actions to make (usually a standard action). Boosts and Stances can improve the attacks you make with Whirlwind Attack, but as you have neither actions remaining nor the ability to make additional attacks even should you have extra actions from some source, strikes can't.

The important distinction here is between things that require a melee attack as part of their use and things that are (or replace) melee attacks. The former are unusable with whirlwind attack. The latter are typically compatible.

There are many parts of the rules that refer to making such attacks as "melee attacks", from attacks of opportunity, to sunder and disarm maneuvers, to making melee attacks while using the Full Attack full-round action. While there is also the standard action called Attack (and not "Melee Attack"), which is its own action and also allows you to make a melee attack as one of its possible options.

The core rulebook is confusing on that aspect because of the name they gave that action (inherited from 3.5), and they attempted to clarify that on the Melee Tactics Toolbox when describing the Types of Actions:

Melee Attack: While a melee attack isn’t an action type itself, many options and other rules affect melee attacks. Some combat options (such as the disarm and sunder combat maneuvers) can be used anytime you make a melee attack, including attacks of opportunity. These options can’t be combined with each other (a single melee attack can be a disarm or sunder combat maneuver, but not both), but they can be combined with options that modify an attack action or are standard or full-round actions. Some options that take or modify melee attacks have limitations—for example, Stunning Fist can be used only once per round.

This confusion is mostly caused due to how the (official) PRD and (unofficial) SRD organize and display that information, really. If you open the CRB it should be less confusing, as the action names have a different formatting from the text describing them. 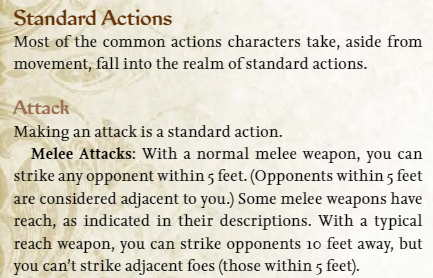 Not the answer you're looking for? Browse other questions tagged pathfinder-1e feats attack path-of-war or ask your own question.