In which directions can I direct Gust of Wind?

I recently played in a session where Gust of Wind was used in a way I had not seen before, and I wanted to see if my gut instinct on whether that was actually how Gust works.

As a bonus action, you can change the line's direction.

The line is established in the casting, but I am wondering what the valid choices for direction are. In the session I played, the caster changed the direction of the wind to perpendicular to the original line. See below: 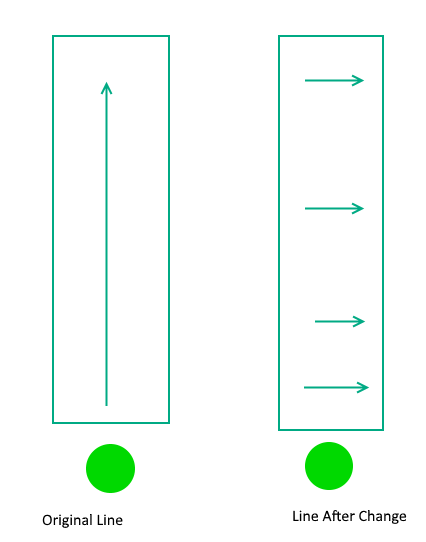 I had been operating under the impression that you could only change the direction the wind emanates from you (the caster). I.E. move the wind from coming out your front to coming out your back.

What are legal changes to Gust of Wind I can make using the bonus action clause?

You choose any direction emanating from you.

The text of the spell establishes that the line emanates from you in a certain direction and that's the direction the wind blows (emphasis mine).

You can use a bonus action to change that direction. The line still emanates from you but in a different direction, and that becomes the new direction the wind blows in. Creatures pushed by the wind are always pushed along that line in a direction away from you following the line.

The perpendicular example in your diagram is not a valid use of the spell. A creature can only be pushed parallel to the direction of the line.

As noted by @V2Blast, you have misquoted the spell in your question, and that might be the source of your misunderstanding. The actual text of the spell states:

As a bonus action on each of your turns before the spell ends, you can change the direction in which the line blasts from you.

I don't think it could be much more explicit.

8
Would Gust of Wind affect a Vampire in Gaseous Form?
15
While sailing can Gust of Wind be used to speed up your boat?
40
Is it possible to cast multiple spells per turn?
6
No size limitation for Gust of Wind?
2
Spell specialization gust of wind
13
How long does the pushback function of Gust of Wind last? Have I been nerfed by the DM?
10
Can Spider Climb negate Gust of Wind?
30
Can you react to your own spell?
4
Can Storm Guide stop rain and redirect wind created by magic?
12
If I cast Gust of Wind and then move, what happens to the line of wind?