Does cover protect against an aura if it only has a gap outside the aura?

I understand that the aura originates from the target and moves with it, and that as long as the center of a creature is within the radius of the aura it is subjected to the aura's effect.

There is one point that confuses me in the definition of auras and cover though:

An aura issues forth from each side of your space, emanating out to a specified number of feet in all directions. [...]

The rules for cover apply to auras (see page 314); an aura does not need line of effect to a target, but it must not be entirely cut off from the target (an aura in a lead box would not extend outside the box). Some auras are active for a duration, meaning you can potentially move while the aura is active; in this case, the aura moves with you as you move.

You usually need an unblocked path to the target of a spell, the origin point of an area, or the place where you create something with a spell or other ability. This is called the line of effect. If you need to check whether you have a line of effect, draw a line like you do when determining cover (see page 314). Only solid barriers break line of effect.

It is not stated that this line has to be straight, but I assume so. Point is, Auras do not need such a line of effect, but must not be "entirely cut off". The example states the origin or the target being in a closed lead box, but what if the box was either made out of wood or was not completely closed and had an opening, but this opening was out of the radius of the aura (see the purple example in my ugly drawing below)? 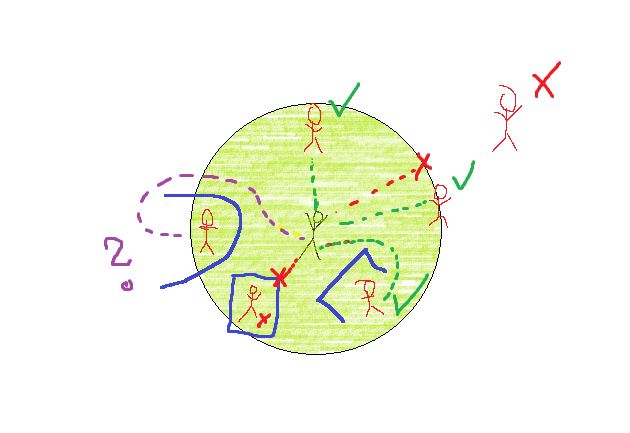 Auras are weird, but no it wouldn't protect against it.

This means that the edge of a spell's range acts as a wall of sorts, so if this was an aura with a range, and was cast centered at the edge of the spell, it'd have essentially half of it cut off by the spells aura.

Unfortunately, there is no similar rule for spell areas and their effects. The only rule for them is

an aura does not need line of effect to a target, but it must not be entirely cut off from the target

This means that as long as the area is not completely cut off from the point of origin from the aura, it will effect that area. This is due to auras in 2e lacking the spread rules from 1e.

Essentially, no matter how far you walk, as long as you end up within the radius of the aura without needing to go through a solid wall, that area is considered to be a part of the aura.

The rules for cover apply to auras (see page 314)

When cover might benefit a creature attempting a Reflex saving throw against an area effect, draw the line from the effect’s point of origin to the center of the creature’s space. If the line passes though blocking terrain, the target has cover against the area effect.

If a creature between you and a target is two or more sizes larger than both you and your target, that creature’s entire space is considered blocking terrain for the purpose of determining cover.

This means that if you have a multiple creatures in your Aura and there is creature two sizes larger in the path of the line from the origin to another creature, that creature is considered to have cover. This and other forms of cover provide their bonuses to Reflex saves and AC against the spell.

Not the answer you're looking for? Browse other questions tagged cover aura pathfinder-2e-playtest or ask your own question.

8
Does a prone creature grant cover to its allies against ranged attacks?
9
Does 'Aura of Hate' also boost the damage of nearby hostile fiends and undead attacking you?
10
Is a spell's area set before damage is applied?
3
D&D 4th edition - area/line of effects
18
Do auras require line of effect?
11
If a paladin becomes Large, at what point does the paladin's aura originate?
5
Does the Fear spell work with an Oath of Conquest paladin's Aura of Conquest?
1
Does cover help against spells/effects that spread around corners (like fireball)?
8
Does the Paladin's Aura of Protection affect only either her or ONE ally in range?
11
Do tower shields provide cover from all directions?