Basically, Im playing a necromancer. I will be going over my limit of controllable undead so the ones Im not controlling, I want to leave in a room. Would they leave that room?

They wander around, looking for living to feed on.

Zombies are unthinking automatons, and can do little more than follow orders. When left unattended, zombies tend to mill about in search of living creatures to slaughter and devour. Zombies attack until destroyed, having no regard for their own safety.

Skeletons act in a similar way.

The pile of bones suddenly stirs, rising up to take on a human shape. Its long, bony fingers reach out to claw at the living.

So, they will seek to find any living nearby, as you might expect of zombies. 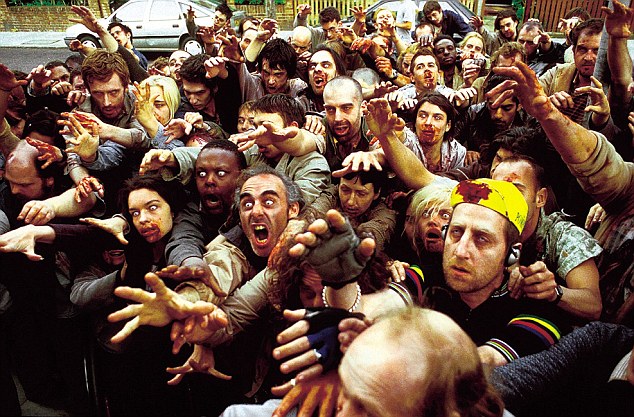 And this sort of behaviour is reasonable for your DM to encourage, since it fits with classic undead stereotypes, and they could easily extend this to other undead types. You should make sure you leave someone to feed them, or lock them up somewhere they can't bust out of.

This thread had some good questions and answers. A notable quote from Wraithstrike sums up my thoughts:

An intelligence of - means you can not formulate tactics or adjust to a situation.

Example: If you are prone you will stand up not even noticing the potential AoO. You will not take the safe route to avoid an AoO. Flanking will not be done on purpose. You care basically a computer. You do what you are programmed to do. At best you can act on instincts such as an knowing you want to kill living things. I think the attack of opportunity is going to happen since it represents you letting your guard down making you easier to hit. Combat is simulated and even if you roll the dice once it is assumed that attacks are always being made.

PS:I am not providing RAW because mindless is not in the rules. This is one of those common sense things.

As far as turning a door knob I would have to say no. Insects are also mindless, and I don't see them turning door knobs even if they have hands.

Insect, undead, and constructs should pretty much have the same problem solving abilities, IMHO.

In your case, you can probably put them in a room with little issue, provided the door is strong enough they can't break it down and/or the area is safe enough that no one is provoking your dead to come out.

As noted in the quoted post, there aren't rules dictating this other than the basic description of Mindless and an extrapolation of how other creatures act. I'll note that he missed Oozes, which are typically Int -.

Not the answer you're looking for? Browse other questions tagged pathfinder-1e undead or ask your own question.

10
Is the blinding effect of Glitterdust effective on mindless undead?
10
How can I make the players think outside their normal selves?
6
How do I challenge extremely strong 1st and 3rd level characters?
11
Does Mindless limit my minions' ability to help build our kingdom?
3
How exactly do negative levels affect undead?
2
First time PCs and Information Gathering - should we have done more?
33
Is there a way to save this session?
27
Does a humanoid possessed by a ghost register as undead to a paladin's Divine Sense?