Here is the description for the trap:

This hallway contains an elevator trap, triggered when at least 400 pounds of pressure is applied to the 10-foot square section of floor in the center of the hall... A party of adventurers moving in close formation down the hall is certainly heavy enough to trigger the trap. (Curse of Strahd, p. 74)

You can move through a nonhostile creature’s space... another creature’s space is difficult terrain for you. Whether a creature is a friend or an enemy, you can’t willingly end your move in its space.

Is "close formation" an aspect of the rules I have missed? Given further description of the trap in the text, it seems as if the design of the adventure anticipates more victims than I'd assume:

All creatures inside the elevator (including the unconscious ones) must roll initiative...Each creature inside has one turn to act before the compartment comes to a stop. Their initiative rolls determine the order in which the occupants act...They might search for a way out, wake sleeping party members, cast spells, or take other actions.

How many creatures can be victimized by this trap?

It triggers under the weight of 400 lbs worth of creatures, however many creatures that may be.

There is no "close formation" rule you are missing. The text of the trap is describing characters in close proximity to each other, which is just what it means.

However, it is unlikely the text of the trap is trying to be that pedantic. When you as the DM consider that the trap has been laden with the weight of 400 lbs worth of creatures passing over it, you can consider it to be triggered.

For example, you could consider 5 characters marching in a tight cluster to trigger the trap even though the combat movement rules don't technically allow 5 Medium creatures to fit into that space, because in the real world or in a reasonable imagining of the in-game situation it's possible for 5 creatures to fit in a 10 ft square space. Picture any elevator you've ever been in.

Moreover, the combat movement rules consider each character's movement in isolation over a sequence of turns. It's entirely possible that, mechanically, at no point in time do 4 creatures end their turns of movement precisely on 4 distinct 5 ft squares of the trap's space, but that's due to limitations inherent to the combat abstraction. When 4 people are marching in tandem, they're not going one at a time, even if the combat movement rules suggest they are. They're moving simultaneously. So by a reasonable understanding of how people move it's possible for them to all trigger the trap by moving atop it.

Basically, there's no formula or rule to determine when the trap triggers other than when you as the DM estimate that 400 lbs of weight has been applied to it. Depending on how you run your dungeon exploration (square by square, theater of the mind, precise movement, abstract movement, tape measures, fudging it, or so on) you might be more or less picky about it, but it's still up to your judgement, since the actualization of this world is the DM's.

I'm assuming no unconscious creatures on the floor. They just assumed that 2 or more adventurers will sum 400 pounds or more; it isn't a far-fetched idea.

Close formations refers to a group of individuals that stay close to each other, at arms length. In D&D case, 5 ft. from each other. The trap will activate after 400 pounds are over it. Depends on the group, but usually 2 will be enough to activate the trap. Here are 3 possible examples of close formations. 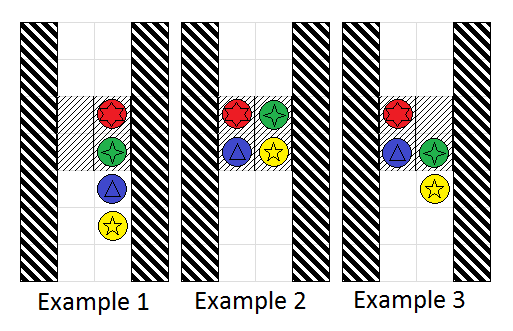 In the first example, only 2 adventurers are over the trap each time. It will only activate if a combination of 2 of these adventurers weight 400 pounds or more.

In the second example, they were even closer to each other and the first 2 were not heavy enough making everybody a victim of the trap.

In the third example, it activates with the first 3 are over it, but the 4th ends up safe.

The party weight and formation will determine how many will be over the trap when it activates. If the party is more than 10 ft. from each it other, the trap probably won't activate.

The trap can activate pretty easily for a normal-sized group of Adventurers, and it can easily trap at least 4 of them

How exactly are you traveling?

Close formation is a description of how a party might move around an environment, not a mechanically defined term. If you haven't already established the way your players move around when exploring, it's probably a good idea to do so earlier rather than later, as it will save a lot of hassle in many different situations.

In my games, we establish a "marching order" whenever the party is exploring or adventuring in a new area. This works best when actions are undertaken on the fly as opposed to in something like a strict initiative order, and lets you simulate the way a group might travel down a road, a spooky forest trail, or the dark bowels of a cave system.

How bad could it get?

Let's imagine a few different scenarios your players might enact. These are written as verbal descriptions, but it's not uncommon to have players put down miniatures or other tokens on the table to represent the exact places they're positioned in while traveling.

We walk single-file with 10 feet between each of us

If your players decide that they want to travel with plenty of space between them this kind of trap is pretty harmless to them. It's unlikely they'll ever trigger it.

We walk single-file with the two heavily-armored fighters in front, in case there are enemies ahead

This is not terribly uncommon, and two humans in Plate can easily hit 400lbs of weight or more. Don't forget that all that gear people carry contributes to their weight with regards to the trap!

Even more dangerous for this scenario is if your party decides to stay in a tight group (a "close formation" if you will). A 4-character group walking two-abreast and keeping a wary lookout around them is almost guaranteed to cross that 400lb threshold and trigger the trap, causing all of them to start falling.

There are, of course, other ways to get more characters involved. Characters could carry or drag unconscious (or willing) characters with them or there could be mounts involved.

4 medium or small creatures can occupy the 10 ft square area of the trap.

Not the answer you're looking for? Browse other questions tagged dnd-5e traps curse-of-strahd or ask your own question.

9
Can large characters sqeeze through 5' spaces between 2 enemies, or do they do something else?
24
What happens when allies occupy the same space?
5
How wide of an area are characters dispersed when a Rope Trick spell ends?
10
Will this creature from Curse of Strahd reappear after being banished?
6
When playing on a grid, how many Medium creatures fit inside the area of a Scroll of Protection's barrier during combat?
10
Where does the water weird from a Weird Tank go when it emerges?
7
Is it possible to move through the space of the Guardian of Faith spell?
16
Why would this NPC in Curse of Strahd ever attack Strahd?