Can the Catapult spell interact with Melf's Minute Meteors?

Basically, if I were to summon some meteors using Melf's Minute Meteors, could someone else use the Catapult spell to launch them at the big bad? It seems to me like a really inventive interaction between spells, but it begs a few more questions to be answered:

Generally speaking, spells only do what they say they do. The minute meteors only do two things: orbit you, and streak off to explode somewhere via the initial launch or a bonus action. There's no mention made of being able to physically manipulate the meteors the way there is for, say, Otiluke's freezing sphere, and certainly the spell doesn't imply they're physical objects by talking about opposing combatants swatting them out of their orbits or anything. From a strict standpoint, the spell doesn't say you can, so you can't use a minute meteor as ammo for a catapult spell.

A DM might decide to allow it, but they'd be responsible for answering all the detailed questions about how it works in that scenario. For one thing, the spell doesn't say the meteors explode except through the use of the 'streak to a location' effect, so there's no particular reason to think that a meteor launched by catapult would explode on impact. But it's not clear what would happen if it didn't explode (does it come back and continue to orbit?) so again, that'd be up to the DM to decide.

Personally, I think that's a clever combo and would probably allow it to work as you intend -- it's really not significantly different from catapulting a rock and using the usual meteor attack, just costs one less bonus action -- but that's because I like to reward clever thinking rather than because the rules say it should work that way.

The meteors are objects...

The language "You create six tiny meteors in your space. They float in the air and orbit you for the spell’s duration." makes it clear that the meteors are physically present, rather than an illusion, or a purely visual phenomenon like Faerie Fire.

5E's spells famously do exactly and only what they say they do, but the word "meteor" is a little hairy. In scientific usage, a meteor is the flash of light around a meteoroid (the little rock) as it enters the atmosphere, not a tangible object. Arguably a meteor is more of an event. In precise astronomical terms, sentences like "A meteor is going to collide with Earth and destroy Houston" don't make sense, because the flash of light won't make it all the way to Houston—and even if it does, the flash of light isn't what you should be worried about.

But this definition doesn't apply very cleanly to Melf's Minute Meteors, which, far from being instantaneous flashes in the upper atmosphere, persist in the air around the caster for ten minutes or until you lose concentration. Melf's Minute Meteors can collide with things and explode, which we would expect more from a meteoroid than from a flash of light. (If you do take the scientific position to its logical conclusion, which typically in adjudicating D&D you should not do, to create a meteor would necessitate the creation of a meteoroid...in which case, you have your tangible object!)

It's more likely that the authors intend for Melf's "meteors" to be understood in the unscientific layman's sense of "a space rock that's on fire." This is supported by artwork: 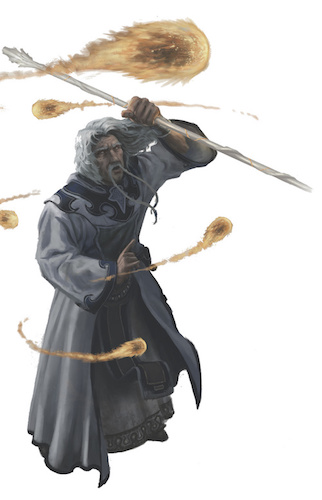 Now, art is not rules text, illustrators are not game designers, and art directors are not rules adjudicators. This is not incontrovertible evidence. But it does square with a common idea of "meteors" in fantasy and science fiction, one which designers can reasonably expect players (even pedantic astronomers) to recognize.

...But they might not weigh enough to be targeted by Catapult.

Looking back at that art, the meteors created by this spell appear to be about the size of the wizard's fist—and the solid part, inside the fiery halo, is somewhat smaller. (I believe the larger meteor at the top of the image is dramatically foreshortened). The composition of these particular rocks is not given, and we can imagine a range of different densities. Again, art is not rules text.

The name of the spell says "minute," though, and the spell description says "tiny." (It does not say the capitalized rules term "Tiny," which would mean "about the same size of a frog, cat, Faerie Dragon, or velociraptor.") These terms are imprecise and depend on your frame of reference, but they are evocative. "Minute" makes me imagine a meteor so small that it would be difficult to notice, if it weren't flying around your head while on fire.

Absent a specific declaration of an individual meteor's weight, it comes down to a judgment call. Specifically, the call you have to make is: If that meteor is a legal target for Catapult, meaning it weighs a full pound, does it really qualify as minute?

Yes, with some stipulations.

In my interpretation, the argument for being able to launch the meteors is much, much stronger than against. Really the only contingent is that the meteor weigh in between 1 and 5 times the spell level in pounds. Let's break it down.

"You create six tiny meteors in your space."

Despite this being an evocation spell, it says the meteors are created. Not manifestations of energy that appear physical, physical meteors.

"When you cast the spell—and as a bonus action on each of your turns thereafter—you can expend one or two of the meteors, sending them streaking toward a point or points you choose within 120 feet of you."

The important factor here is that the language is that you can do something, and that it is not contingent on a specific method for incurring its effect. Let's take, for instance, Magic Stone, a similar spell.

"You or someone else can make a ranged spell attack with one of the pebbles by throwing it or hurling it with a sling. If thrown, a pebble has a range of 60 feet. If someone else attacks with a pebble, that attacker adds your spellcasting ability modifier, not the attacker’s, to the attack roll. On a hit, the target takes bludgeoning damage equal to 1d6 + your spellcasting ability modifier."

It gives you the function of how to use the Magic Stone. It says you can attack with it like a normal ranged weapon, but stipulates that on a hit the target takes damage. Being on a hit is understood to require an attack roll, so a saving throw triggered by Catapult wouldn't cause the Magic Stone to incur its own damage even if the pebbles were 1-5* pounds because it requires an attack roll, because it's a failed save, not on a hit.

"Once a meteor reaches its destination or impacts against a solid surface, the meteor explodes."

"Each creature within 5 feet of the point where the meteor explodes must make a Dexterity saving throw."

So now you have the tertiary effect down this chain of events. You create meteors. If they impact something, it explodes.

"A creature takes 2d6 fire damage on a failed save, or half as much damage on a successful one."

Then the damage is done by the explosion, not the meteor, whose usefulness as an object is done away with upon impact. The meteor is ultimately unimportant to the desired effect of the spell, it only summons the damaging effect.

So essentially, the meteor is akin to a regular magical object whose only stipulation is that it impacts something for its effect to trigger.

"Choose one object weighing 1 to 5 pounds within range that isn’t being worn or carried."

Since Minute Meteors are not carried, they "swirl around you" implying a certain level of detachment (like if fish were "swimming around you"--they're not carried) and because the spell does not specify a nonmagical object like the way Magic Stone or Animate Objects does, they satisfy every condition to be targeted by the Catapult spell. The rest of the spell doesn't care about what kind of object it is, only that the object could be targeted to begin with.

So yes, if a Minute Meteor is within 1-5* pounds, you can Catapult it.

The question is, is a Minute Meteor at least one pound? Since they are Tiny, that puts them in the same size category as a cat, which are easily more than one pound. The artwork shows roughly apple-sized meteors, but the spell doesn't stipulate even a rough reference point. If you go by the actual density of meteorites, which are about 3.0 to 3.7 grams per cubic centimeter, a 7cm diameter sphere made of meteorite (about an apple-sized meteorite) would be 0.8 to 0.9lbs, which is pretty close to a pound but just under it. But this is a make-believe game. Let the casters have their meteors.

I see no reason that your DM would kneecap this kind of strategy because it's not even particularly busted, requiring two to seven spell slots to do a maximum average damage of 7+7=14(on a save) to 7+14=21(on fail) per first-level spell slot after the up-front investment of a third-level spell slot to cast Minute Meteors. Its damage output does raise when you consider using a bonus action to hurl two additional meteors, so that might be useful, making it possible to do 7+7+7+7=28(on a save) to 7+7+7+14=35(on a fail) with one catapulted meteor and two hurled, using up both bonus action and action to burn at least one and one 1st level spell slot.

No, you can't move them.

Six tiny meteors orbit around you for the spell's duration. When you cast the spell, and as a bonus action on subsequent turns, you can hurl up to two of the meteors to points you choose within 120 feet. It explodes if it reaches the point or hits a solid surface. Each creature within 5 feet of the explosion must make a Dexterity save. The explosion deals 2d6 fire damage on a failure, or half damage on a success.

They orbit, and the only way to interact with them is to physically touch them, which makes them explode. They're not interactable objects, other than exploding.

Also, they're not objects.

For the purpose of these rules, an object is a discrete. inanimate item like a window, door, sword, book, table, chair, or stone, not a building or a vehicle that is composed of many other objects.

They're not inanimate, being floating objects, they're a spell effect.

There's an ambiguity about whether they can explode before their destination but if they can, if the Catapult Spell was used on them and it was solid they would explode. Catapult probably does not produce a solid object of any sort. If they don't interact, they'd just continue orbiting.

That said, your DM could decide to run the spell differently, and so you could ask them for this inventive interaction.

Not the answer you're looking for? Browse other questions tagged dnd-5e spells objects weight or ask your own question.

4
Could the orbs from Melf's Minute Meteors explode before being launched?