Does the Resilient (Con) feat or the War Caster feat most improve the chances of maintaining concentration?

The War Caster feat (PHB, p. 170), among other benefits, grants advantage on Constitution saving throws that you make to maintain your concentration on a spell when you take damage.

Which of these two feats statistically provides a greater benefit in helping a character maintain concentration on a spell?

The proficiency bonus is the primary factor

I made a graph to compare Resilient and War Caster.

How to read the graph.

War Caster is blue, Resilient is red, and no-feat is green. The lines are also labeled accordingly, with the "+number" being the bonus to the save. The constitution modifier is set to 1 by default1.

There are six red lines because there are five proficiency values (2 through 6) plus another bonus if resilient improved your constitution modifier. For example, if you have 13 constitution and are advancing to level 8, then your save with Resilient would become 2 Con + 3 Prof. Therefore, you compare the blue +1 line with the red +5 line.

For the purpose of concentration checks, if Resilient improves your concentration by at most 4, then War Caster is usually (but not strictly) better than Resilient. There are a number of unusual circumstances that can skew the choice in Resilient's favor, especially if more than one applies to you. For example:

It depends on your level (among other things)

Hence, until you're level 13 and your proficiency bonus increases to +5, War Caster will be more useful. If the ability score increase also raises your CON modifier, you reach the tipping point 4 levels earlier, at level 9.

Let's do a little more math. Assuming you often take less than 20 damage, you will usually have to beat DCs of 10. Assuming you have 14 CON, let's take a look at some anydice.com calculations:

Clearly, your best option would be getting a +9 modifier, in which case you simply couldn't fail concentration checks with a DC of less than 10.
However, that would require 16 CON and the maximum possible proficiency bonus, so it's unlikely you'll get there before you'll have to suceed on higher DCs than 10.

Anyways, with 14 CON (although that shouldn't matter too much), you need at least a proficiency bonus of +5 to get better results than by choosing War Caster. If your CON score is uneven before you take the feat, it will also increase your CON modifier by one, meaning you only need a +4 proficiency bonus (which is reached at level 9).

Be sure to keep in mind that War Caster provides other benefits - being able to cast (certain) spells as opportunity attacks can be really useful. For this reason, I'd always advise choosing War Caster.
Then again, Resilient benefits all CON saving throws, not just concentration saving throws, so I guess it depends on what you want.

However, if you can spare the ASIs (e.g. because you're a variant human and get one free feat anyways), choosing both can be really powerful.

Probabilities when choosing both feats:

Assuming you spend your first two ASIs at level 4 and 8 on actual ability score increases for your main stat and are playing a variant human, you'll be level 12 by the time you accumulate 2 feats.

At all levels of play, the answer depends on how much damage is being dealt in a single blow. But there are general rules that can be followed:

In this scenario, they would naturally have a +2 to their Constitution Saving Throw. Since 4 damage is below the Concentration Check minimum of 10, the check is set to 10. As a result,

That's a lot of damage, but pretty plausible for getting hit by a nuke spell. The DC for the concentration check is now 15, so...

Once again, Warcaster is better, though the difference is less pronounced: Warcaster is only about 20% better than Resilient.

Things have changed a bit. They're way stronger, but they're still getting hit by a pretty mild attack (for their level). DC is 11, here's how the stats shake out:

The odds have flipped in Resilient's favor, and by a significant margin: Resilient causes you to fail about half as frequently as Warcaster does.

This is a pretty decent for this level. DC is 17, here's the stats:

Resilient once again wins out, though they're both very close to each other in this situation. The raw percentage point difference is greater than in the previous example, but Resilient is only about 20% better than Warcaster in terms of overall failure prevention.

War Caster is better at the beginning, worse later

I calculated with 12 Con for War Caster, and 14 for Resilient(Con), this being an optimization question.
Once against 10 damage, this being the most common even on higher levels, once against 10 + 2 * Level (I find this a good approximation). On the Y-axis is the chance to succeed, X-axis is level. 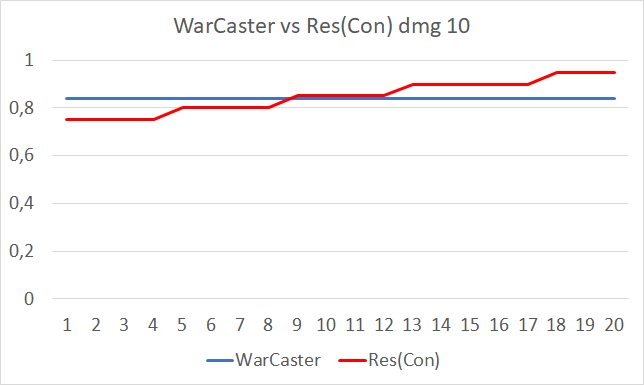 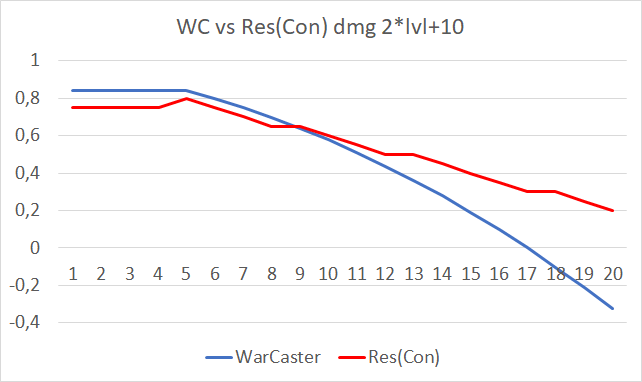 It is visible that in both cases Resilient pulls ahead around level 9-10.

You should take Resilient anyway

Forget about concentration for a minute.

Constitution is one of the top two saves. It is common, and the effects are nasty. Both Wisdom and Dexterity are even more common, but Dexterity usually just saves you some HP, and all the others are very rare. If you are not proficient with Wisdom saves, it is a good idea to take Resilient(Wis). Resilient(Con) is almost as useful in this regard.
So helping Concentration is just a side benefit, what you get besides is worth a feat alone. And there is the half HP per level from the +1 Con.

Would you take War Caster if it did not provide a bonus to concentration checks?

If you can reliably provoke opportunity attacks, have a good cantrip available, have a decent Con save anyway, only than should you pick War Caster over Resilient(Con).
The single intersection of these requirements I have ever seen was a Paladin/Warlock with Polearm Master1.

1) Paladin with Aura of Protection for the acceptable Con save, Warlock for the cantrip (could be Sorcerer) and Polearm Master for reliable2 opportunity attacks
2) Most DMs rarely provoke opportunity attacks with movement, and spells that force an opportunity attack (Dissonant Whispers for example) are costly, and can be saved against

What about all other conditions saves where you do not have any benefit from War Caster but have from Resilient (CON).
Also it is extremely beneficial if you have odd number in constitution - because than you will receive extra 1HP with every level later on and that is extremely important for wizards who have low hit points

Not the answer you're looking for? Browse other questions tagged dnd-5e feats optimization statistics concentration or ask your own question.

201
How does rolling two d20 and taking the higher affect the average outcome?
32
Are there concrete advantages for being proficient at social skills in a table that rewards roleplaying these interactions?
9
For battlefield control, what’s the optimum mix of a Paladin dipping Warlock?
1
How important is the War Caster feat?
0
Between the half-orc's Savage Attacks trait and the Elven Accuracy racial feat, which is better?