This is during the Tomb of Annihilation campaign, while recruting a Guide, this player used his Divine Sense around

He immediately went to talk to her, and told her he knew she was a disguised celestial thing, and started asking question like "Why are you here?", "Which god do you serve?", "Can you help us?", ...

This is not too hard to handle, and I think I've managed it well, but my issue is if they choose to hire that character.

I usually like to create light Character sheets, and give them to the players so they can control the NPCs in their group freely as long as it is not in opposition to the NPC's alignment/background. But that character is very powerful and have Innate Spellcasting and all, so I want to handle it this way:

That character pretends to be a human (very good) spellcaster to anyone except the paladin but asks for his discretion. If the player characters prove themselves to be trustworthy, that character will tell them the truth and help them find

I think I will give the players this statblock, and let them play that character: 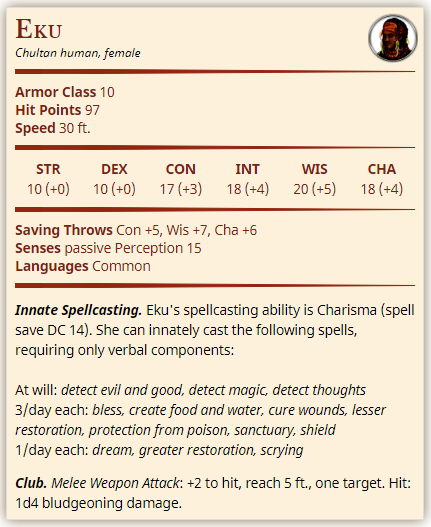 Do you think it's a good idea? Am I taking the risk that that character will be too powerful and help the party so much that their own characters will not be as useful as that character?

It is entirely up to a DM as to how to handle NPCs. You certainly don't need to give the PCs control over them if you don't want to.

It is also entirely up to a DM as to how an NPC reacts, what questions they are willing to answer and so on.

Even a celestial isn't necessarily going to drop everything just to help the PCs - it may have its own inscrutable reasons for being mysterious! E.g. it may know that the PCs must brave some dangers and get some experience (in the game-sense, not a meta-sense) before they will be capable of handling a more dangerous threat later and therefore drop hints to this effect.

Not the answer you're looking for? Browse other questions tagged dnd-5e published-adventures tomb-of-annihilation or ask your own question.