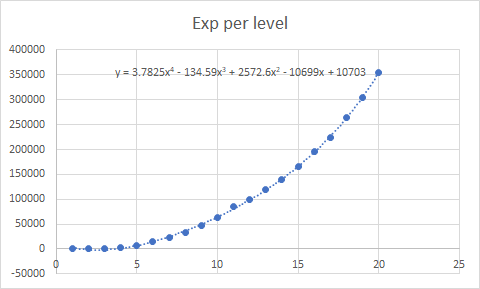 Exchange "Level" for the cell containing the Level value, and you would get a nice rounded value.

Not the answer you're looking for? Browse other questions tagged dnd-5e character-advancement experience-points character-levels or ask your own question.

13
Is there a formula to calculate level given experience?
14
How would I model a vast range of levels of power in Fate Core?
44
What is the reason behind “one level at a time” level advancement in D&D?
25
How can I balance gradual character advancement for new players vs. trying to keep the PCs at a similar level?
5
How is PC experience calculated when higher level CR allies help in Adventurers League?
18
What spell slot count formula can I use to base my homebrew mechanic on?
13
In Out of the Abyss, characters are supposed to be level 15 by the last chapter; how can I get them there via milestone levelling?
10
Are there any unintended negative consequences to allowing PCs to gain multiple levels at once in a short milestone-XP game?
4
What is the formula behind each level spell slot progression that I can use in a spreadsheet?