WoD in anydice: rolling for minimum number of successes

We all know how to roll dice in WoD in anydice, but I stand in front of a different yet related problem:

This sounded ludicrous, till I ran the numbers and found out that (by manually summing the results) 6 dice would result in a 1.34% chance to do this, 7.17 with willpower, 11.29% with a specialization only and 22.27% with both. But... that is tedious.

How to model rolling Xd10 against difficulty Y with a demand of Z successes, only displaying the percentage of "minimum and more successes" "below threshold" and "botch"? If computation time limits wouldn't bitch out about it, it would be nice to run a loop of Z to 10 dice in addition.

If you really want to do the summing directly in code, probably the easiest way would be to use a helper function like this:

This just takes a number COUNT (which could be the result of any dice roll) and compares it to a target number MIN, returning -1 if the count is negative, 0 if it's non-negative but less than the target, and 1 if it's equal to or greater than the target. Plotting e.g. [[roll X d NORMAL] minimum 4] will then directly give you the probabilities you asked for.

Of course, it's also easy enough to loop this over a range of dice pool sizes, if that's what you want.

There's no need to write any extra code for this, since the AnyDice user interface already provides the "At Least" and "At Most" modes that automatically sum the output probabilities.

For example, running the code by Jasper Flick from this answer (which, by default, uses DIFFICULTY: 7 and X: 4 dice) and clicking the "At Least" button gives the following output: 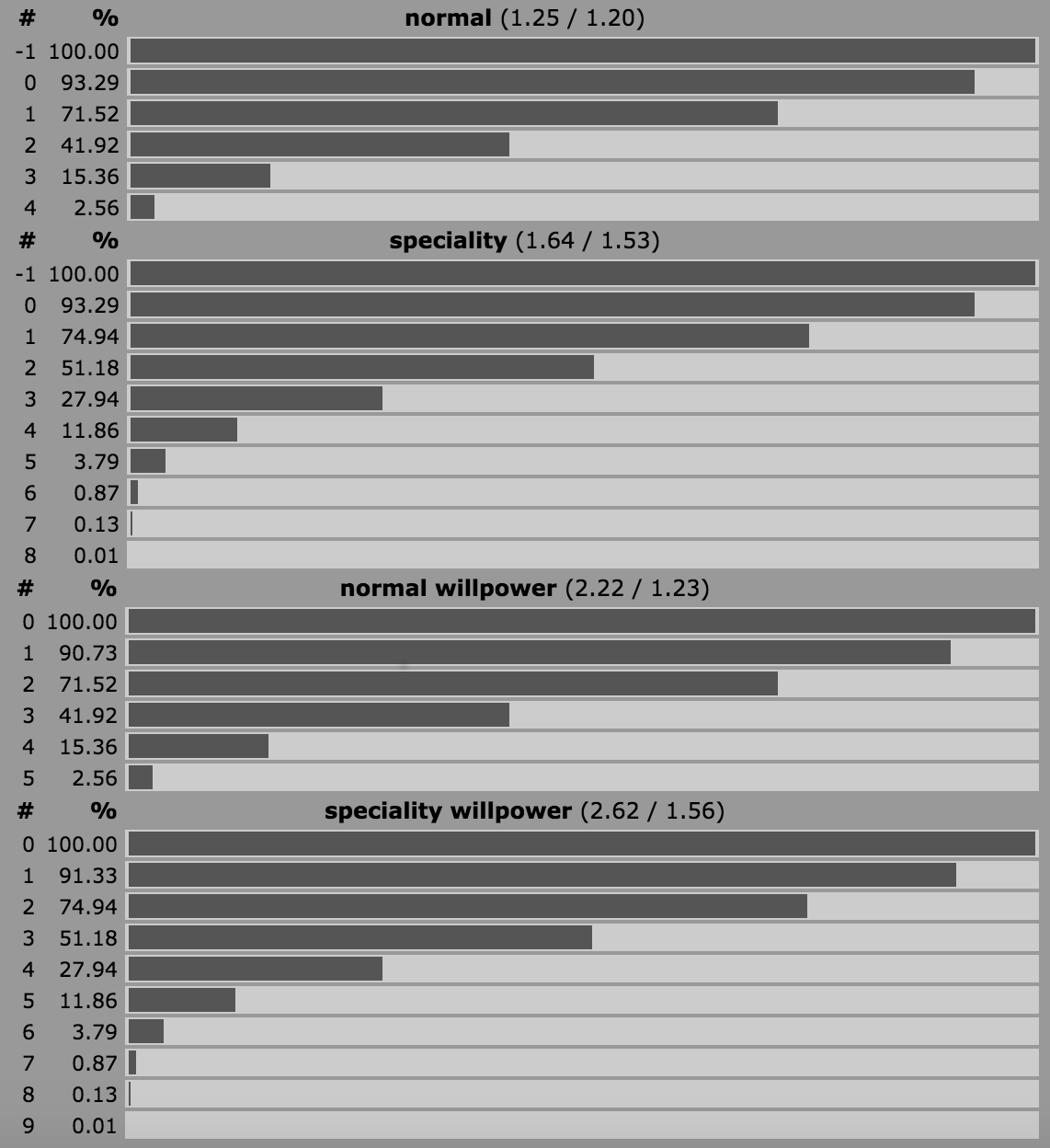 Similarly, looking at the bar labeled "0" in the same output gives the probability of not botching (since the code treats a botched roll as -1 successes), which is 93.29% without willpower (and 100% with it). To get the probability of botching the roll, you can either subtract that from 100% (and, hopefully, get 6.71%), or just switch to "At Most" mode and look at the "-1" bar instead.

Not the answer you're looking for? Browse other questions tagged world-of-darkness anydice .

6
How do I use AnyDice with Classic World of Darkness / 20th Anniversary?

6
How do I use AnyDice with Classic World of Darkness / 20th Anniversary?
5
Modelling rolling for stats in Anydice
3
AnyDice formula for rolling 2d20 and dropping farthest value from 10
4
In AnyDice, how can I calculate the number of successes in the highest dice in a given dice pool?
5
How can I use AnyDice to get the odds of a specific number sequence from rolling 3d10 and dropping the lowest die?
8
Counting fails and successes in dice pools in Anydice
11
Rolling 7 stats of "4d6, reroll 1s and 2s, drop the lowest number" and dropping the lowest sum in AnyDice
6
AnyDice compare dice roll value to number on a multidice roll
5
Anydice: Counting Successes and Rerolling Failures In Dice Pools
8
Modelling "rolling d6 >= charges left expends a charge" mechanics with anydice