Can the Staff of the Woodlands be used as a druidic focus?

First of all, I play in Adventurers League, so if anyone answers this - please no house rules.

I have a druid character that, for the most part, fights in melee range (up close and very personal). Recently, she received the Staff of the Woodlands which is awesome, but also causes a small problem: she carries a shield, and needs to keep an unoccupied hand to hold her focus and use somatic spells.

According to the PHB, a druidic focus can be a staff that was "drawn whole out of a living tree". Nowhere in the description of the Staff of the Woodlands is its make mentioned; however, it can literally turn into a tree and vice-versa.

Can the Staff of the Woodlands be used as a druidic focus, or do I have to give it or my AC up?

The Staff of the Woodlands is a druidic focus

As you've pointed out , the PHB gives a few examples of what a druidic focus should be and "a staff drawn whole out of a living tree" is certainty the most applicable option in the list.

Druidic Focus. A druidic focus might be a sprig of mistletoe or holly, a wand or scepter made of yew or another special wood, a staff drawn whole out of a living tree, or a totem object incorporating feathers, fur, bones, and teeth from sacred animals. A druid can use such an object as a spellcasting focus.

Staff of the Woodlands does not describe how it is made of so one could question whether it has been "drawn whole out of a living tree". However, no one could reasonably claim that this isn't a wooden staff, given its theme and depiction: 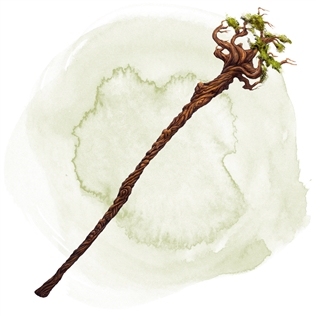 Finally, there is precedent for a magic item that functions as a focus, even though that magic item does not explicitly say it is a focus.

The answer isn't clearly defined in the rules, so there is some DM leeway here, though the precedent leans towards yes. Specifically, Jeremy Crawford has said that a magic missile wand can function as an arcane focus.

Not the answer you're looking for? Browse other questions tagged dnd-5e magic-items druid dnd-adventurers-league spellcasting-focus .

17
Can any magic item rod be used as an arcane focus?
11
Can I use a spider leg as wand for my druidic focus?

56
Can the arcane/druidic focus staff double as quarterstaff?
3
Does the Staff of Defense count as an arcane focus?
12
Crafting an Improvised Spellcasting Focus?
31
Must a Ranger's spellcasting focus be druidic, or can it be arcane (or even holy)?
10
Are there any spells or any other way for Druids to create a focus out of a tree?
2
Are there any spells that allow a Druid to create a focus out of a living tree previous to 5E?
11
Can I use a spider leg as wand for my druidic focus?
11
Does Wild Shape require a Druidic focus?
5
Can the Tree Stride spell be used on a transformed Staff of the Woodlands?
3
Can some Tools be used as a Druidic focus?