I quiet don't understand what is meant by one, the critical hit or the melee weapon? First I thought, if I kill a creature with one hit, I get a bonus action. Then a friend told me, one means the critical hit and the information

The idea by choosing GWM, besides all the other great opportunities this feat grants, was the chance of killing a whole group of weak enemies with my raging barbarian.

"One" is referencing the melee attack

What GWM does is give you the option to perform a single additional melee attack as a bonus action if you either roll a critical hit or reduce a target's HP to zero (either by killing them or simply getting them to 0 HP) while using a melee weapon.

There can be only one

It is important to note that you only ever get one single bonus action per turn. Therefore, you cannot kill a group of weak enemies since you are still limited by the standard action economy of having available, in a given turn, your Attack action and your bonus action.

"One" in this case refers to a melee weapon

Specifically, the Great Weapon Master feat allows you to use a bonus action to make a melee attack if either of the following conditions are true:

Two things to note here (based on what you wrote and a potential misunderstanding you may have):

You only need to reduce the enemy to 0 hit points with a melee attack. You do not need to do so in only a single hit. In other words, if you hit an enemy three times over three turns, and then on the fourth turn hit them and reduce their hp to 0, you can use your bonus action to make a melee attack on that turn.

A pronoun always refers to the closest noun in the sentence/phrase or previous sentence that serves the same grammatical function. In this case, the corresponding phrases are "with a melee weapon" and "with one". Thus, One refers to "melee weapon".

So you get a bonus attack, if you get a critical hit or if you kill (reduce to 0 HP) a creature when making an attack with a melee weapon.

A Diagram of the quoted sentence: 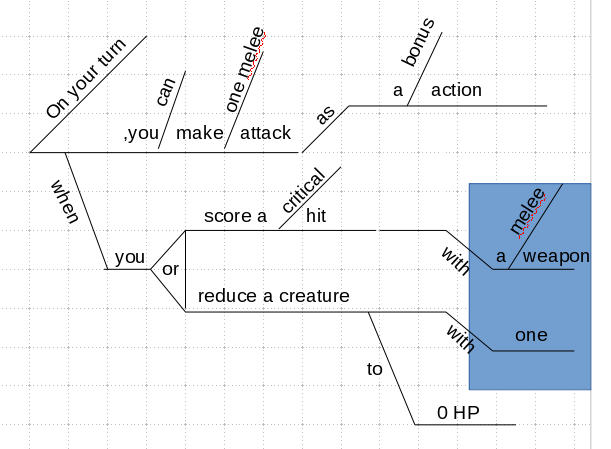 Not the answer you're looking for? Browse other questions tagged dnd-5e feats .

90
What does upper-case-A-Attack action vs. lower-case-a-attack mean?
22
Does the extra attack from Great Weapon Master apply to all melee weapons?