Does the Invisibility spell hide the illusory appearance produced by the Seeming spell?

Our party was infiltrating a town under the guise of the seeming spell. We then decided that in order to further investigate an area, some of our party would go invisible. We ruled that the invisibility spell would cover up the seeming appearance; however, we couldn't find an official ruling. Seeming seems to lay on top of the PC, but not worded as "worn" so it doesn't follow under the same ruling as other items from what we could tell.

How would seeming interact with invisibility?

The Illusion Stays and your Physical Self is Invisible

Invisibility and/or Greater Invisibility spells would not make the illusions from Seeming become invisible.

From a RAW perspective:

This is the only statement about what becomes invisible in Invisibility and Greater Invisibility (PHB 245, 254):

Anything the target is wearing or carrying is invisible as long as it is on the target’s person.

You give each target you choose a new, illusory appearance.

An illusion can not be on your person, you cannot wear it or carry it, so it does not become invisible. Your body would be invisible and the illusion would continue.

Also the spells have overlapping durations so Invisibility would not cancel out Seeming but rather add together.

Combining Magical Effects: The effects of different spells add together while the durations of those spells overlap.

From an interpretive perspective:

If you use this spell to appear thinner than you are, the hand of someone who reaches out to touch you would bump into you while it was seemingly still in midair.

The description explains that your old appearance cannot be seen and yet your physical self is still there and can be felt. You're old self is invisible! 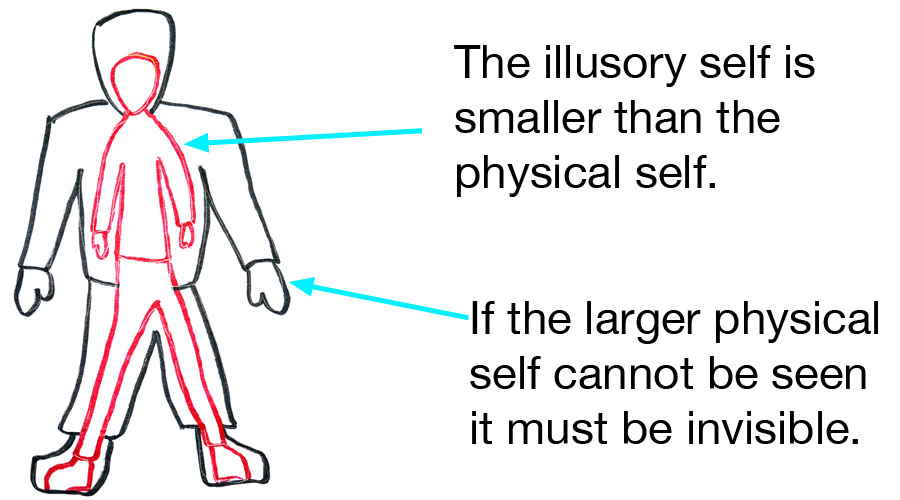 I think there's rather compelling evidence that your physical body becomes invisible and a completely new illusory form is projected right on top of you.

disguises physical appearance as well as clothing, armor, weapons, and equipment. You can make each creature seem 1 foot shorter or taller and appear thin, fat, or in between.

It does all this only through illusion? What happens to your bow sticking up behind your head? What happens to your heavy armor protruding all over the place? Your backpack? Your Long sword? Your Great Axe? I posit that you and everything you are carrying goes invisible and is replaced with an illusion. This speaks to the process of the spell. The spell does not change how it works based on the illusion you choose. It always makes you invisible, and it always projects a new illusory self over you. If you were to add one pimple to your face, it would work the same way as if you made a rotund dwarf look like a young child.

So what happens when you make something invisible invisible again? Nothing.

The illusion stays, and your physical self continues to be invisible.

Not the answer you're looking for? Browse other questions tagged dnd-5e spells illusion invisibility or ask your own question.

23
Can you become "visible" by casting Disguise Self?

6
Does a creature lose invisibility after being hit?
5
Does a Spell Glyph need to "see" the target to activate?
24
Can I cast Slow on an invisible target?
14
How does the spell Time Stop interact with delayed damage AoE spells?
21
If Invisibility ends because the original caster casts a non-concentration spell, does Invisibility also end on other targets of the original casting?
18
Do I have to roll to maintain concentration if a target other than me who is affected by my concentration spell takes damage?
10
Does the Detect Magic spell show a glowing outline around an invisible creature?
9
While under the effect of the invisibility spell, would using a wand of pyrotechnics break the invisibility?
27
Is there no way to have a single casting of the Feather Fall spell affect a whole group of people who decide to jump off a cliff during combat?