How to measure on a grid the area of a sphere area spell or effect centered on a creature?

07-08: You cast fireball as a 3rd-level spell centered on yourself.

There's other questionable area spells in that list (grease is a 10 foot square, so your square and which three?), but I'll focus on spheres like fireball (PHB p. 241):

My problem is, the sources I found so far - including the other answers to similar questions here - talk about measuring spheres from grid square intersections, whereas this clearly talks about it being centered on the unlucky Wild Magic sorcerer. Plus, since it's a wild magic effect, it doesn't exactly have a caster that can pick a point of origin. Is there an accepted way to measure an effect like this?

This is a DM call.

As observed in another answer from Thomas Markov, there are two ways of reading this.

The first reading is literal: the Fireball is centered on yourself, hence the point of origin is the center of the square in which the characters is. The situation is depicted in the below figure, where the green circle is the Sorcerer, the red circles represent other creatures and the small circle the point of origin of Fireball. 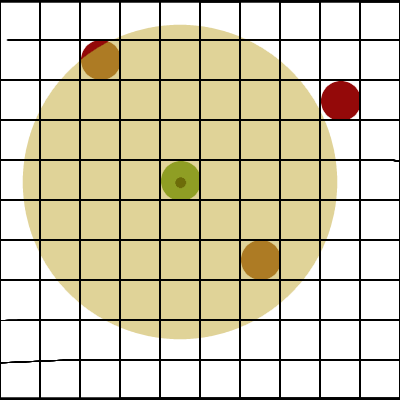 The second reading applies the rules for using a tactical map from the DMG and the rules from XGTE:

Choose an intersection of squares as the point of origin of an area of effect, then follow the rules for that kind of area as normal (see the “Areas of Effect” section in chapter 10 of the Player’s Handbook). If an area of effect is circular and covers at least half a square, it affects that square.

In this case, there are 4 intersections around the square in which the Sorcerer is: then it has to be decided from which intersection the Fireball originates. The 4 situation are depicted in the figures below: pay attention that this choice affects in different ways the creatures around the Sorcerer. 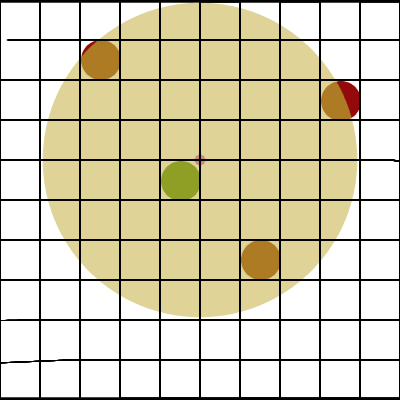 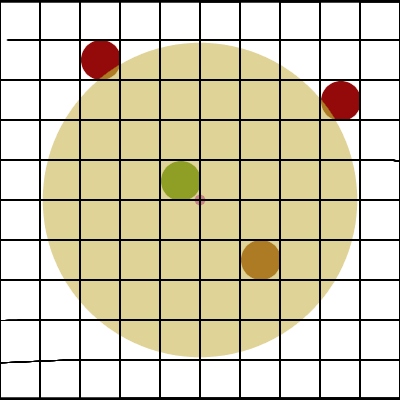 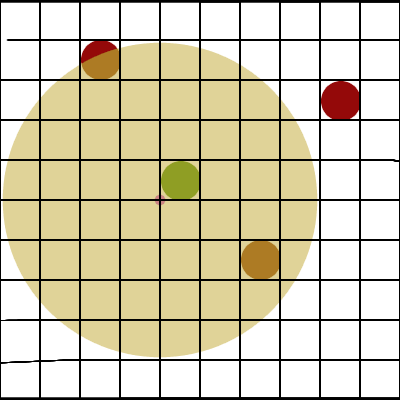 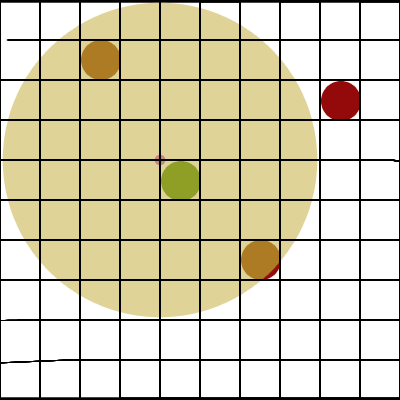 It is up to the DM deciding who picks the point of origin: the player or themselves.

Choose an intersection of squares or hexes as the point of origin of an area of effect, then follow its rules as normal

Therefore, when playing on a grid, you select an intersection of squares as the point of origin. The rules then follow as if the spell had been cast on that intersection.

First, a ruling from the DM is necessary.

The effect in question is:

You cast fireball as a 3rd-level spell centered on yourself.

The DM must determine if this creates an exception to or if it is subject to, the rules for adjudicating areas of effect on a grid:

It simply is not clear which is the "most correct" rules-as-written ruling here.

Either way, you determine the area in the same way.

However, in either case, the method of determining the area of effect is the same:

If an area of effect is circular and covers at least half a square, it affects that square.

So, for each ruling, we have the following areas of effect: 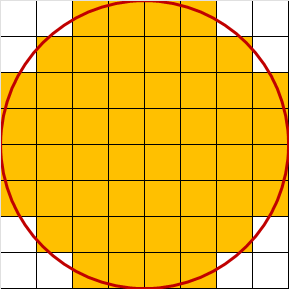 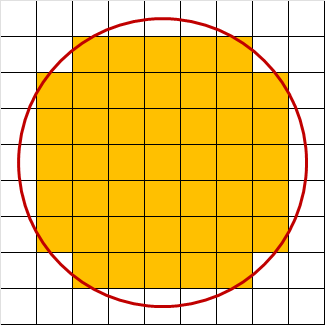 Centered on the center of a square, total area: 45 squares

I've always used something pretty much identical to this: 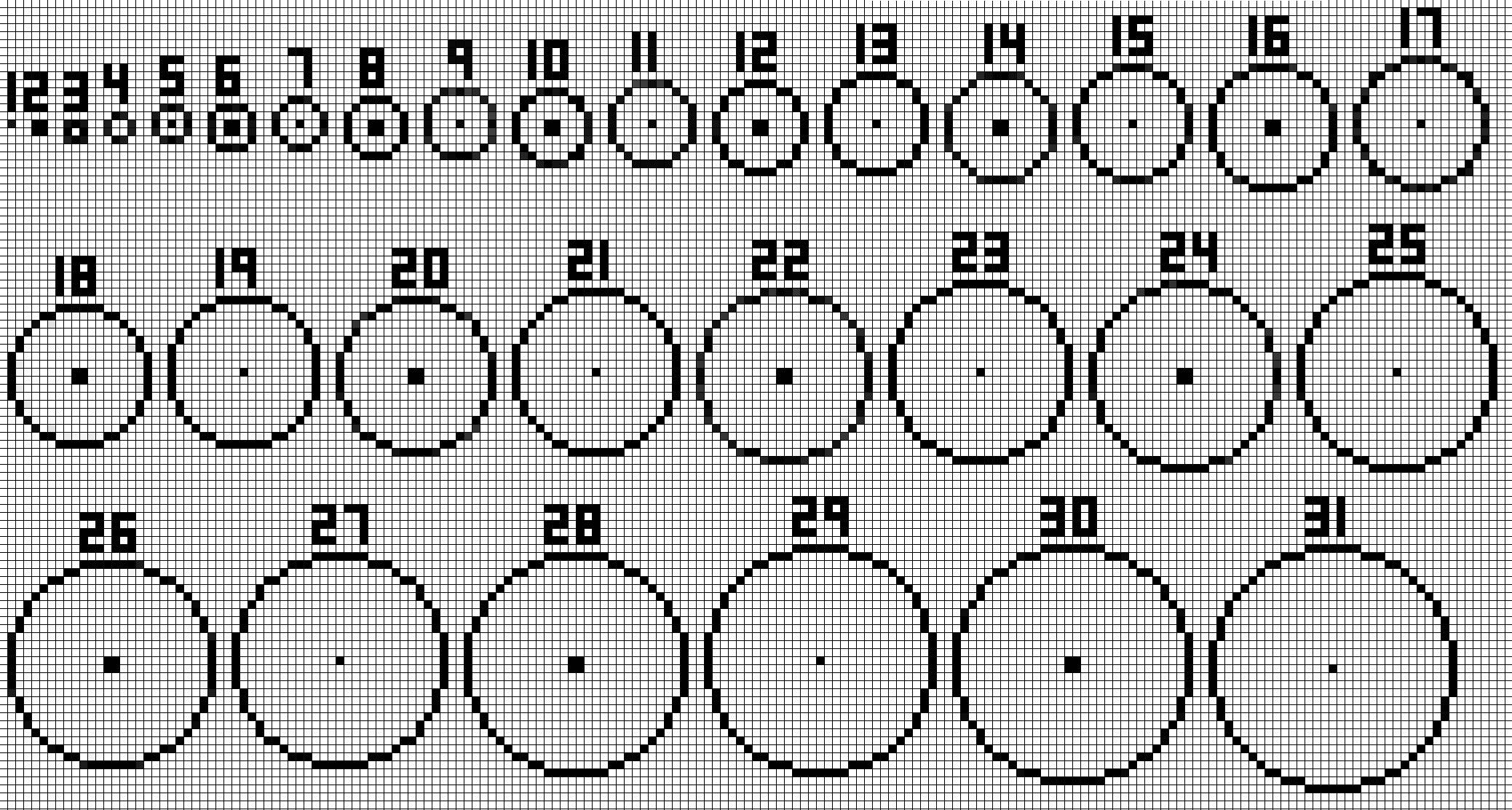 For circles whose diameters are an even number of squares, I just center the circle on the origin square (i.e. so it's offset from the actual map grid by half) and then roll an attack on any square that's at least 50% covered by the pixelated circle.

Not the answer you're looking for? Browse other questions tagged dnd-5e battle-map area-of-effect .

19
What is a radius on a square grid?
22
Does the radius of the Spirit Guardians spell depend on the size of the caster?
14
20 foot square versus a 20 foot circle on a battle mat
13
Does an aura affect all creatures including ones only partially in the aura?
6
On a grid, what is the area of effect of the Spirit Guardians spell?
4
How do we determine circular AoE areas on grid?