Is my Sword Coast resident likely to have seen a dinosaur?

Does the Sword Coast have dinosaurs, or are they from a foreign land? I am specifically interested Quetzalcoatlus by the way.

I'll also add that this character in question is level 8 and has had a bit of a life and been through war etc, but has not really traveled extensively far from home.

Sword Coast Adventurer's Guide doesn't mention dinosaurs at all. That's not decisive as it's not an exhaustive setting book, but it is the closest thing to a "pure" setting book for the Realms that's been published so far for 5e.

Xanathar's Guide to Everything gives some hints as to where druids might see dinosaurs: the plesiosaurus appears on the Coast and Underwater tables; the pteranodon, allosaurus, anklyosaurus, and triceratops on the Grassland table; pteranodon on the Mountain table. So maybe you've seen a plesiosaurus on a 4th-grade whale-watching trip, or a menagerie traveling up from Calimshan had an allosaurus with it? (The Coastal Encounters tables include pteranodons and plesiosaurus later in that book. Grassland Encounters include anklyosaurus, allosaurus, pteranodons, triceratops, and even tyrannosaurus rex.)

However, there's nothing in 5e's literature of the Sword Coast (SCAG, Tyranny of Dragons, Princes of the Apocalypse, Storm King's Thunder, and other adventures) to suggest that dinosaurs are native to that part of Faerûn.

Hop a boat south, though…

…And you'll arrive in Chult, and Chult is teeming with dinosaurs. You can't spit without hitting one! Really, just take a look at this Tomb of Annihilation promotional piece that depicts Chult's Port Nyanzaru: 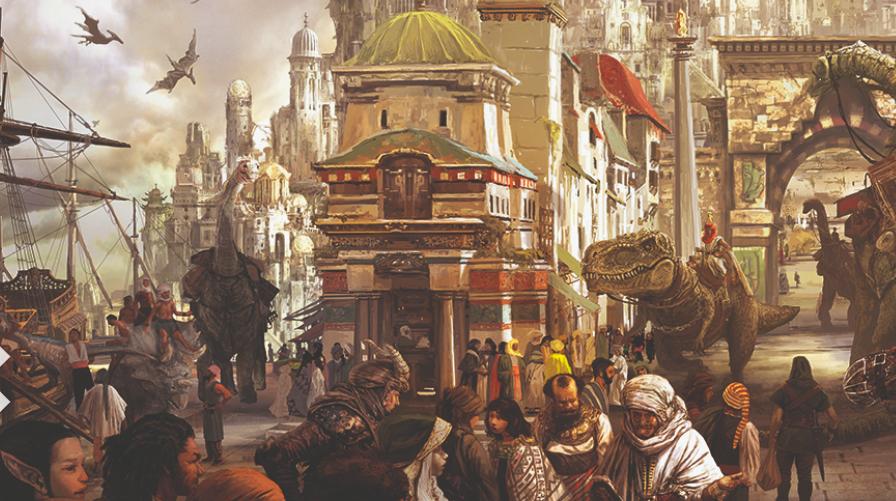 Not the answer you're looking for? Browse other questions tagged dnd-5e monsters forgotten-realms or ask your own question.

49
Can I be a follower of an evil god and not be evil?
9
Sword Coast weather and climate
5
Small campaign to get us (1 PC and 1 GMPC) up to level 2 before starting Lost Mines of Phandelver - is this a good idea?
15
What happened in Maztica to make Tabaxi emigrate?
7
What's the appropriate skill for knowledge about contemporary celebrities?
13
What about the ranger keeps making it weak?
15
Can a 14th level Theurgy Wizard with the Arcana Domain cast their 8th/9th level spells after picking up three levels in another Full Caster class?
16
How is Sword Coast North governed?