Does shoving a creature break its grapple on another?

A situation came up in my session where a fighter used his Shield Master Shove feature to shove a Giant Crocodile that was currently restraining another PC using it's bite+grapple ability.

I did a quick check at the time and did not find anything related to shove, although in the grappled condition description it states:

I ruled at the time that a shove would count in a similar way to being "hurled away" however I wasn't sure and said I would find more concrete information for the future.

I have searched high and low for somebody else asking this specific question but have yet to find it. I saw some reference to a Jeremy Crawford tweet about involuntary movement and grappling however I am unable to find it.

If a third party "shoves" a creature that is grappling another, does it only shove the grappler away, or does it move both the grappler and grappled?

I drew a diagram: 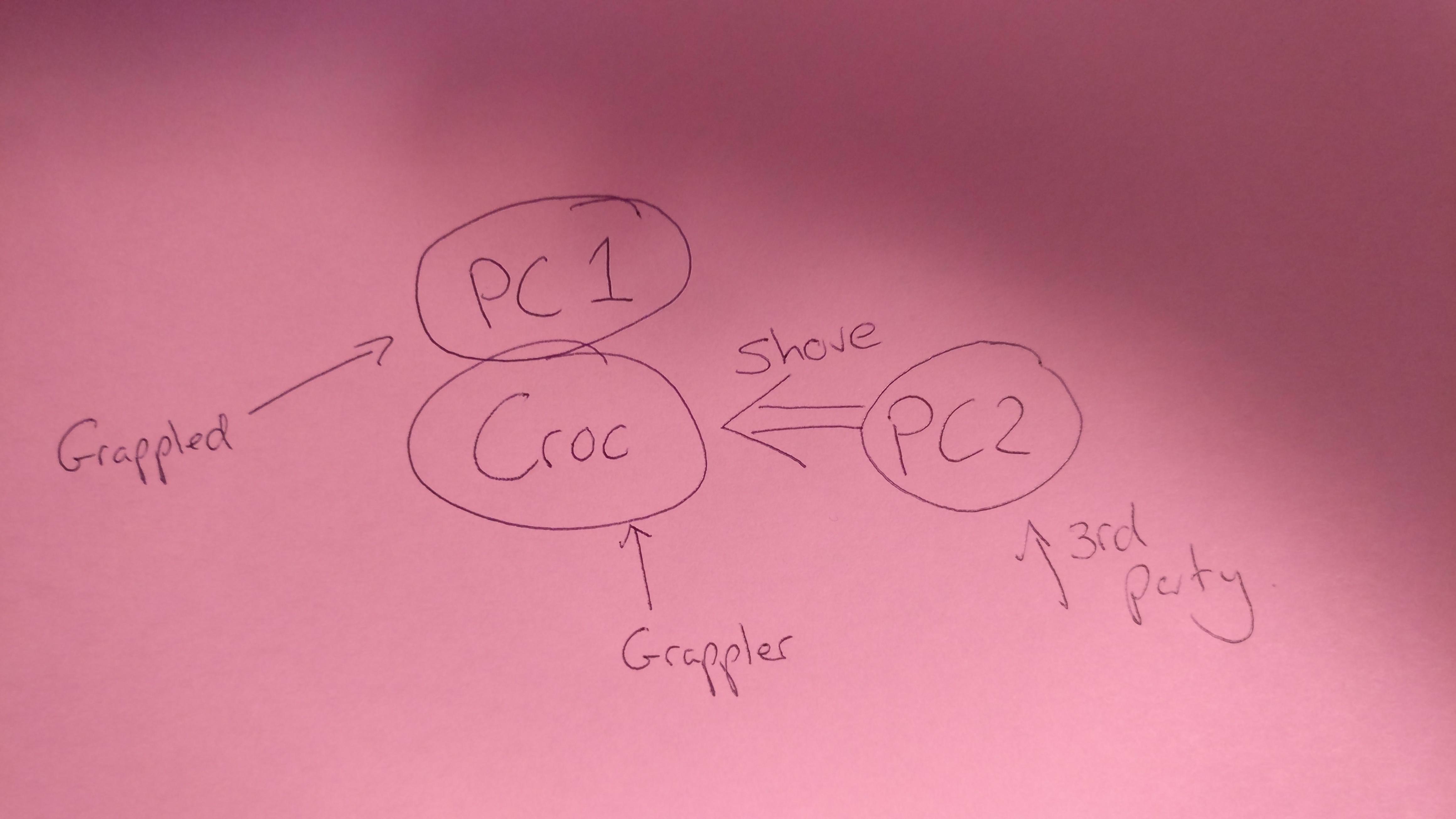 (A related question is about the grappled creature shoving their grappler; this question relates to if a third party shoves the grappler instead, so it's not a duplicate.)

Yes, it does break the grapple (if you end up outside of its reach)

If you win the contest, you either knock the target prone or push it 5 feet away from you

Assuming you opponent only has a reach of 5 foot (and did not start in your space), shoving should fulfill the clause in the Grappled condition in the same way as Thunderwave would:

In the querent's diagram, if the character taking shoving action pushed the Crocodile down and to the left (which is technically also 'away' from himself, but check with your DM), it should be enough to separate the two opponents (assuming you are using a grid and/or don't charge extra for the diagonal movement - again, check with your DM)

Not the answer you're looking for? Browse other questions tagged dnd-5e grapple forced-movement .

4
Does moving a grappler away from its target break the grapple?
1
Does the grappled creature have to be the one that is moved in order to force the grapple to end, or can the grappler be the one that is moved?
1
Does using thorn whip to pull an enemy who is grappling an ally break their grapple on that ally?
32
Can you shove your way out of a grapple?
12
Can I get an ally out of grapple with Thunder Step?
15
Can you use the Telekinetic feat from Tasha's Cauldron of Everything to break grapples?
9
Can forced movement expel a creature restrained by the spell Web?

12
Does forced movement, as in Thunderwave, necessarily break a grapple?
32
Can you shove your way out of a grapple?
16
Does Dissonant Whispers cause the target to release a grapple?
11
Can you grapple-drag someone out of a grapple?
10
If I am grappled by an enemy with 10' + reach, how does our movement work?
7
What happens when the UA Bait and Switch maneuver is used on a grappled ally when the maneuver-user is out of the grappling monster's reach?
7
What happens after an Echo Knight fighter grapples using its echo?
7
How does grappling work in the air, when both combatants are high enough?