What do bombs crafted by Pathfinder's Alchemists actually look like? I was trying to figure this out for a magic item I wanted to create, something that'd be involved in the bombs' creation - e.g. a mixing bowl for bombs, or a beaker to contain them - but I couldn't figure out what they're actually made of, so I didn't know what kind of item might work...

Bomb (Su): In addition to magical extracts, alchemists are adept at swiftly mixing various volatile chemicals and infusing them with their magical reserves to create powerful bombs that they can hurl at their enemies. An alchemist can use a number of bombs each day equal to his class level + his Intelligence modifier. Bombs are unstable, and if not used in the round they are created, they degrade and become inert—their method of creation prevents large volumes of explosive material from being created and stored. In order to create a bomb, the alchemist must use a small vial containing an ounce of liquid catalyst—the alchemist can create this liquid catalyst from small amounts of chemicals from an alchemy lab, and these supplies can be readily refilled in the same manner as a spellcaster's component pouch. Most alchemists create a number of catalyst vials at the start of the day equal to the total number of bombs they can create in that day—once created, a catalyst vial remains usable by the alchemist for years.

There's a vial involved, but it sounds like the actual bomb is "a mixture of volatile chemicals," which has got to be in something, I think. But I'm not clear on what it might be in. (Does the Alchemist go on adventures with a pack full of fragile glass beakers?) The entire process isn't really clear to me.

Here's the iconic Alchemist image; he's got lots of vials about his person, but I assume those are extracts and catalyst vials, not the bombs themselves: 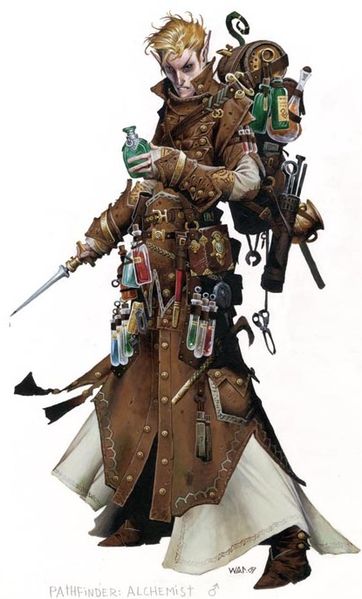 Obviously this can be house-ruled, but I'd like to know if there's a canonical answer.

I am pretty sure there is no canonical answer. In the Potions and Poisons player's companion, there is a page which shows what the component satchels, packs, what have you, of Alchemists from different regions might look like, but does not say they must look like this. For this reason, it seems to me that it can look like pretty much whatever you want it to look like, especially to fit with your character's background, where he's from, or even where he is now.

Personally, the first image that popped into my head was of the Alchemist throwing a small clay pot (since clay is far cheaper than glass) with a stopper. Another possibility that I just thought of is since the Alchemist uses magic to brew his extracts, he could also contain prepared bombs in fragile fields of magical energy and throw those, so he doesn't need to use (or purchase) containers for his bombs.

One of the ways to get the most out of your game is by "skinning." Classes, class features, etc. can and should be changed in visual effect to create an interesting character. I remember listening to the Gamers' Guide to Pathfinder podcast where they discussed the alchemist and fun skinning variants, like the infusions being "unsuccessfully trying to inject yourself with an antidote to prevent you from turning into a werewolf." Or if you're that tumor kind of alchemist, skinning (zing!) bombs as tumors you pull off yourself and throw and then they explode.

Defining an 'exact way things look' is a good way to have a boring game. Don't do that.

It would be pretty terrible if Paizo took it upon itself to dictate this sort of thing.

Based on the description of the power, the bomb is — like the extract and the mutagen – a mixture of chemical agents bound magically together. Since there's no mention of a shell or any other container, it appears to be a handful of powdered reagents that, when the catalyst hits it, firms up into a small ball suitable for throwing.

In order to create a bomb, the alchemist must use a small vial containing an ounce of liquid catalyst

Emphasis mine. To me, this means that the vials are prepared with the catalyst at the beginning of the day (or month or year, it says they don't degrade until the bomb is mixed). So he has a bunch of vials with an ounce of catalyst in them. "Vial" is a bit ambiguous. They have to be big enough to contain an ounce of liquid but beyond that, it doesn't specify. Material, shape, even size (beyond a minimum capable of holding an ounce of material) are all definable by the player (or GM).

The alchemist in the campaign I'm playing in now has decided to avoid glassware as much as possible, for obvious reasons. He goes around with a lot of little cloth bags of dusts and powder which he mixes, breathes into to activate, then tosses.

There's no reason for you not to decide on the format that's most convenient for you, discussing it with your DM, of course. In fact, tying your alchemy into the plot, or into the setting, would be cool.

My alchemist has a bit more of what I thought was a "traditional" feel and so throws little glass balls with a cork and a fuse coming out of it. The dangerous chemicals are inside and ignite when the glass breaks on impact. The other way I thought they'd work is with a vial with two chambers or one vial inside another so they shatter and mix on impact. However this being said I really didn't have the gold (especially at level 1) to afford a near infinite supply of vials (our GM started pretty stingy) but as the others have said at the end of the day its a cosmetic effect so its really up to you.

They can be anything you want but here are some examples

Since Alchemists need to mix the catalyst and the bomb for it to become active and throw it in the same round I like to imagine them as small vials, clay balls or another easily shatterable containers with 2 "inputs": one on top like a regular vial, and a small orifice covered with a lid (something the sorts of parafilm or a tiny magic seal) on the side. When the alchemist wants to throw the bomb, he puts it in one hand and the small test tube like container with the catalyst in the other. He then joins them together in a clap motion and he throws it. Another way I think is cool is having the catalyst be solid instead of liquid, taking the form of a powder or a small ball that he can drop into the bomb starting a volatile reaction.

A friend of mines character actually had the catalyst in a wrist-equipped injector that could protrude a needle at the touch of a button, Assassins Creed style; the injector had a small reservoir with the catalyst. His bombs were mainly made of a sort of clay and when he wanted to use them, he would press the button, stab the clay bomb with the needle and the bomb was ready.

Dynamite. My alchemist takes his standard action drawing, lighting and throwing sticks of Dynamite. Later on at higher levels I'll modify my bombs to look more like Thermal Detonators as I gain more discoveries.

Not the answer you're looking for? Browse other questions tagged pathfinder-1e alchemist .

4
Are Alchemist bombs light weapons?
8
Do Alchemists need sleep before preparing Extracts?
1
How does the alchemist's Stink Bomb work?
1
How do extracts based on Communal spells work?
5
Alchemist's Bombs and Vital Strike: What is "bonus damage?"
1
Bomber's Discovery and Cytillesh Bombs
2
Ectoplasmic Bombs rules?
6
Are alchemist's tools required for Infused Reagents & Advanced Alchemy?
3
How do Volatile Arrows work in the vigilante class?
3
How do a perfumer alchemist's Effervescent Bombs interact with the Healing Bomb Discovery?