How do you determine the area of effect of a flying dragon’s breath weapon? [closed]

When a dragon is flying over its target, how do you determine the area of effect on the ground? If it is breathing straight down, a 60' cone could create a 60' diameter circle, but that's not very likely of a scenario. More likely, the area would be elliptical, being breathed at an angle. Any ideas on how to determine the area quickly during battle without breaking out math skills?

Also, if the dragon is flying, what about strafing its breath weapon? This creates a more intense fight, IMO, and very similar to what we see in movies (LoTR, etc). This was a rule in 3.5, but does anyone have information on how to handle this in 5e?

Obviously, the answer will change based on shape of breath (line, cone, etc.).

The PHB actually has an explanation for this on page 204, under the "Cone" category. It reads as follows:

So, to simplify things, you could do the "triangle hack" where you skip needing to do Pythagorean theorem by simply taking the longest of the two sides.

Strafing-wise, anything you would opt to do would be a home-brew, but I could perhaps offer something that might tantalize your senses and retain a level of balance. So, let's say our dragon comes in for a strafing run at a 20' height, giving an effective ground-cone of a 20' diameter circle that would run for 40' on the ground. 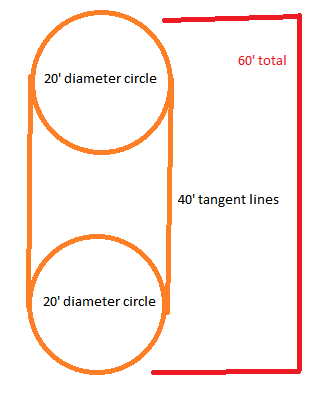 This would technically be a mild buff of total area coverage, compared to "optimal" combat effectiveness of flying 60' straight up and toasting the whole area, but might offer a more realistic breath-weapon attack run option. If you wanted to maintain the maximal area of ground coverage (\$\pi\times{r}^2\$ where \$r=30\$, for 2800 sq. ft. of ground coverage) then you could consider adding 10' to the tangent line of your run for every 10' smaller in diameter you make the circle, to do some simple DnD rounding to 5' intervals.

In short, 10' smaller diameter = 10' run longer (marked as tangent lines in graphic.) This will initially involve lots of overlap, but will spread out as the circles shrink.

For the elliptical issue, there are recommendations in Xanathar's to use premade shapes for specific area effects. In this case, my recommendation is to make premade shapes that use the same total area as the 60ft circle to maintain the balance of the original circular area. I'd make about 2-3 of these ellipticals of varying narrowness to make things easier to track.

While there's no mention of "strafing" in 5E, one thing I have implemented to do the same thing is to utilize the same elliptical patterns suggested before to indicate movement, showing the rough direction that the breath attack is going to be moving in the following turn as well as speed. Usually, long range breath attacks are countered with Dexterity, so character reaction time is already taken into account with the breath attack.

To maintain 5E's mechanics, I make this sustained beam attack require Concentration and the monster's action to maintain. This provides a means for players to interrupt it. While using the elliptical patterns for the area, also indicate what direction it is strafing in, and then replace the original "blast" with a sustained area effect that deals damage at the start of the affected creatures' turns, similar to the moonbeam spell. You'd represent the next area with a similar elliptical, placing the "back" end of the 2nd breath where the "front" end of the 1st breath was.

Generally, I'd use the circular one to indicate a focused breath on a specific target, or that the Dragon was slowed down, and the narrow patterns to indicate that it was quickly moving at a greater distance.

This will increase the difficulty of the Dragon tremendously, as the breath attacks are normally on a timer. I'd recommend increasing the time between when the Breath attacks recharge by about 2 more rounds, just enough for players to catch their breath (get it?).

Not the answer you're looking for? Browse other questions tagged dnd-5e dragons flight area-of-effect breath-weapon or ask your own question.

9
What is the point of origin for cone when originating in a large creature (eg. when a dragon breathes)?
5
Do you reroll a dragon's breath weapon recharge time after each breath attack?
38
Why is the Tarrasque the most dreaded creature?
9
How can I increase the range of a Dragonborn's breath weapon?
4
How do I determine Shadow Dragon's Breath Save DC?
8
Is this homebrew Chromatic Blade spell balanced?
3
Can a lone non-magical human deal with flying targets without projectile/thrown weapons?
15
Does the Gust of Wind spell nullify the “poisonous gas” from a green dragon's Poison Breath?