How large are the Shards?

How large are the Shards of the Overlight campaign setting? 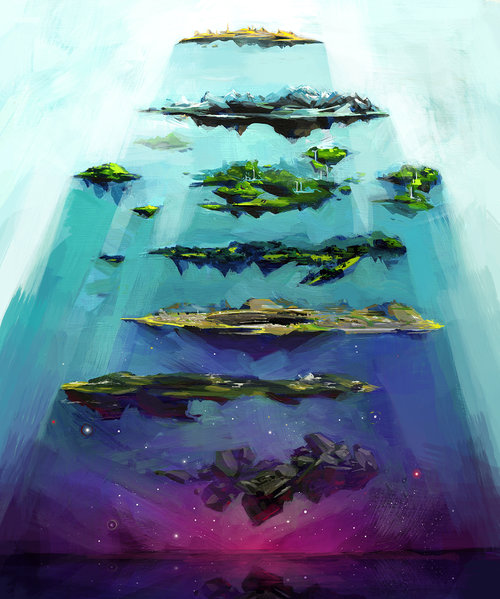 The Seven Shards, giant floating continents that are arranged in orbiting layers, are central to Overlight. They are described as being very large masses of land, and it is explained that their scale should not be under-estimated.

However, other aspects about them suggest that they are still far smaller than the continents of our own planet - perhaps more like small-to-mid-sized countries. Haark, for instance, is described as being completely filled with a single large city, to the extent that every square inch is an urban metropolis. Even if I stretch my suspension of disbelief to its fullest to imagine the most fantastically-huge city I can in a setting of this sort, it would still be orders of magnitude smaller than taking up, say, the entirety of North America.

What kind of actual scale is intended here? Some of the art in the book (such as the one above) suggests that the shards are small enough that you can see details, such as individual tall buildings or waterfalls, when viewing the overall continent, though that might not be a literal interpretation. Are there any clear clues regarding this size and scale?

I couldn't find much more than the official overlight Kickstarter preview pdf.

The Preview is silent on absolute sizes

If the description of "continents floating" is read as "tectonic plate", then it would be safe to take an absolute minimum of 250,000 square miles for the size of Veile. Remember though, that the average minor tectonic plate is between one and two magnitudes larger.

The lower bounds of proper continents start between Greenland and Australia. A ballpark number of 2.5 to 25 million square miles would allow offering the vast expanses demanded by some shards, but it collides with the description of Haark as one monolithic city.

a Horizon of sandblasted expanses means, that a typical person standing at some sort of "average level" can't see the edge of the floating shard. Assuming that the curvature of a shard is somewhat in the area of the earth, then this gives us a lower limit for Nova, but no upper limit - 4.7 km radius minimum if the average level is "sea level" and a ballpark of 19.6 km if he stands on a 30 meter tall rocky pillar. But that is just a rough minimum, that doesn't help a lot, as this minimum 20 km radius circle would only cover an area as big as the area inside the Capital Beltway in Washington DC (~280 square miles) and then you'd have to stand exactly in the middle to get this one described view.

This is all we learn about the landscape. The best we can say is expansive.

Quill: The jungles and torrential rivers of the floating islands of Quill [...] Once they were emperors of their domain, with sprawling cities of spires [...] Teryxians cling to the remnants of a ruined civilization while they try to avoid becoming prey to the appetites of the junglep11

The plural indicates that Quill is rather expansive with large distances between the cities, but no clear indication about how large these cities are or how distant. It doesn't solve our problems though.

Banyan: Each tribe upon this forested shard is inextricably linked to their unique Hearthwood Tree, [...]. These monumental wooden behemoths [...]p11-12

Sadly, monumental wooden behemoth is not defined, but considering the average distance between large trees - for example in redwood forests or in the rainforest - this implies a rather large landmass.

Haark: A single magnificent city, covering almost the entirety of the largest of the shards. p12

Inland sea implies that is is clearly not a lake. When is a sea a sea? on Earth, the 5 smallest seas are:

Pyre: Often bathed in darkness, the tundras and steppes of Pyre are lit by the glow of the shard’s volcanic mountain ranges, which frequently result in rivers of magma coursing through the landscape. p12

Again, no indication but that there is enough space to feature two vastly different biomes, which speaks of quite an expanse, but we can't put numbers on it.

As I was spurred, I grabbed the chapter 6 preview, and could squeeze out a few more information. For example, the day-night-cycle holds this info:

The ring of fire is a tectonic zone around the Pacific, and it contains a Microplate called Juan de Fuca Plate. This one is responsible for a lot of earthquakes between Canada and California. It's "just" 250,000 square miles large, fitting the upper-minimum bounds we found in Veile by taking the smallest seas. The next ones are just a random pick from the list but should illustrate about what counts as a proper tectonic plate.

This gives us a somewhat different ballpark of the size that should/could be aimed for: 1 to 2 magnitudes more than from the descriptions minimum sizes might be intended, maybe even more.

Short answer,No there are not clear rules about the size. Or about 420,000 mi²

From personal experience ; its best to make things the size you need them to be for your table and your games. If you make things too big it would be hard to keep the interesting points dense enough to keep the pacing right. And while you game could be based around exploring and surviving in the empty wilderness you still only need so much empty space.

From the Overlight rulebook...

In practice, what this means is that the Gamemaster has the narrative flexibility to tell the sort of stories that she wants to tell. Is the story best suited if it’s dark for “weeks” on end? Then so be it

Its not that I believe that this is unanswerable. I believe it depends on what you need the shard to do but...

So far it seems that there is nothing in the rules that strictly defines how big any shard it.

From the Text on Zenith...

Towering mountain ranges are home to the snow-covered temples of the Monks of the Zenith Orders. The Monks are humans, having long ago emigrated from Haark to find meaning among the ice and wind. The men and women of the Orders live alongside the Hamanu, a massive-bodied ape-like people capable of scaling sheer mountain cliffs with their grasping hands and feet. The Hamanu and the Monks have developed a peculiar spirit bond and, once paired, individuals are rarely separated.

Going by the one image of the shards provided, roughly 2/3 the size of our reference mountain range which would make the area 237,330 mi² or the size of the Syrian Desert in the Middle east. Or the Patagonian Desert in South America.

About the same size as our reference ~420,000 mi². Which would be a jungle the size of mainland Southeast Asia (Vietnam, Laos, Cambodia and Thailand).

Again, an apparent similar area ~420,000 mi². Which would be like the size of the temperate forest of the Pacific North West. These approximations are getting increasingly dubious.

Obviously, in terms of biome a 420,000 mi² City does not exist for reference on earth. But I guess you could try to imagine a city the size of the area near and around Boston, New York, Phili, Baltimore, to DC maybe as far south as Richmond along the East Coast and as far inland as Albany, Scranton, Harrisburg.

If we make Haark the size of Australia (Approx. 3.3m square miles) and give a decently high population density 500 people per square mile (approx. density of all of the UK). You would have a population of 1.65b people. This is a bit over 1/3 of the population of Asia (4.5b approx.). China has 1.4B approx. at 3.7m sq. miles for comparison. If the amount of people living on shard is high enough it would be possible to have a city that covers the entirety of it as the people would need that space.

Urban sprawl is the expansion of human population into low-density communities. This would be your suburban neighborhoods. If we consider these part of the metropolis the reality of squeezing every inch of land into the definition of city is a lot closer.

If we stick with medieval buildings, we would have significantly shorter buildings. This would lower our population density maximum and would contribute to the urban sprawl.

Having a continent sized city is plausible given enough population density. However, I don't know what the true scale of what size they think the shards should be. The only clear clues that I think we have at the moment are those pictures. I would assume from them that having a metropolis of the size pictured there wouldn't have much issue from a believability standpoint.

I don't think this really answer the question - it only says that the specific Haark example might be plausible at real-world scale (which I also don't think I agree with).

The two main issues presented are: Haark for instance, doesn't seem plausible at continent scale (argued above) AND What is the actual scale which I said based on the images seem quite compact in comparison to a continent. Thus, I argue that Haark at real-world continent sizes works and that the intent of the text seems to state real world size while the art shows it much smaller.

Bonus Fact: Population density of some countries reaches higher than 20,000 per square mile and I compared at 500.

Not the answer you're looking for? Browse other questions tagged overlight .