Can you cast Mirror Image twice on successive turns and have 6 duplicates of yourself instead of 3?

Mirror image (PHB, pg. 260) is a spell that has a casting time of 1 action, and a duration of 1 minute. My question is, can you cast Mirror image twice on successive turns, gaining 6 images by turn 2?

Since Mirror Image doesn't require concentration, there should be no interference between the 2 casts in terms of concentration. I know that this could be up to DM Fiat, but I was wondering if there was a proper interpretation of the printed rules for this situation.

Only one casting of Mirror Image will be active

The effects of the same spell cast multiple times don't combine, however. Instead, the most potent effect - such as the highest bonus - from those castings applies while their durations overlap.

Therefore, only one of them will actually have their effect active. They are still both cast, though, so if one was cast later, then when the first one runs out, the second will "kick in" for as long as it has left (assuming the first was considered the "most potent").

I consider that multiple uses of the spell would overlap, and that, as pointed by the rules, the stronger current effect would be applied... So, I made a simple table considering how 2 uses of mirror images in sequential turns would work and how attacks would affect them. The colors represent from which of the spells used is the currently seen image. 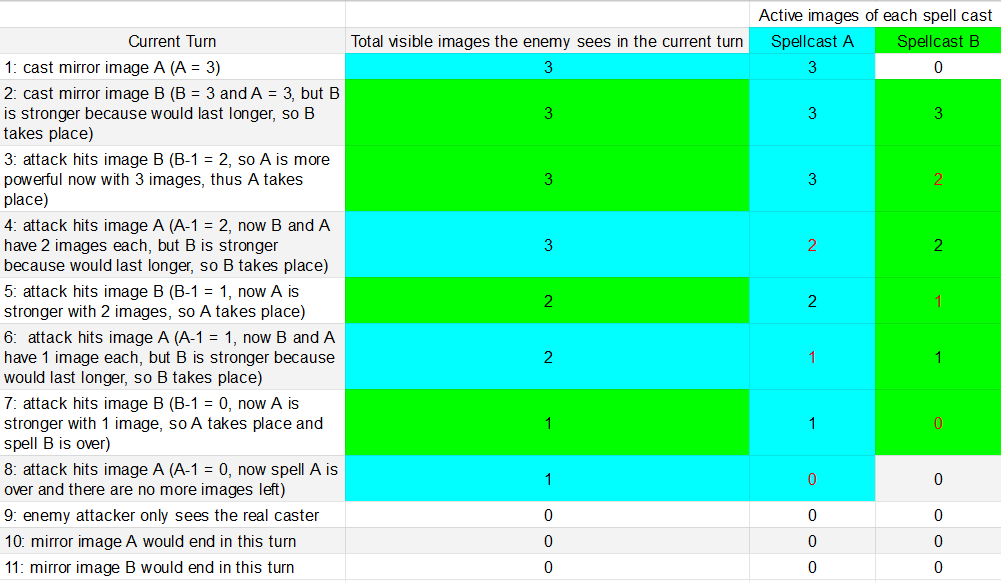 In this case, the colors represent each use of the spell "Mirror Image", that is, each time a spell slot and an action were spent to cast the spell (in the example, the spell was cast two times, the first time on turn 1, and the second time on turn 2).

1st: Two turns must be spent to cast the spells.

2nd: Each group of images would have "an extra life" (meaning that each "image amount" would have to be "killed" twice in order to reduce the amount of images by 1).

The second effect is important because it represents a very interesting momentary buff for the evasion of the caster, considering the effects of having the higher number of duplicates for a longer period. Here is a copy of part of the spell description that states the odds of redirecting an attack to one of the duplicates, based on the amount of duplicates still visible:

It is also interesting to consider that maybe 3 or more subsequent uses of the spell might also be relevant, but only until the number reaches 10 (which is the moment that the first use of the spell would naturally expire, and the following uses of the spell would not overlap at more then 10 at a time, with one spell use expiring at each subsequent turn - what would make it necessary for the caster to spend his action to cast the spell again and again, on every turn, in order to keep the 10 "lifes" for his group of 3 duplicates). The number "10" is relevant, though, because at that turn, after casting the spell 10 times, the caster could recieve 10 attacks without lowering his amount of 3 visible images (which keeps the highest odds of redirecting attacks to one of the images even if all the 10 attacks manage to "kill" one image each). Consider this as an extremely situational scenery where the caster has 10 rounds to prepare himself to rush into an extremely dangerous area with lots of potential enemies (not to mention the huge amount of spell slots/scrolls or other forms of casting this spell that would be necessary). I'm not sure about making a table for this, but I think the idea is pretty funny.

Not the answer you're looking for? Browse other questions tagged dnd-5e spells stacking or ask your own question.

2
Is there a way to get more than 3 mirror images from levels 1-10?
20
How do two castings of Mirror Image interact when one starts losing illusory duplicates?

13
Does Spiritual Weapon stay until the end of its duration if the caster goes uncounscious?
7
How does the Feather Fall spell work on a flying character falling unconscious? What if it's the caster?
6
What does the Mirror Image spell look like?
20
How do two castings of Mirror Image interact when one starts losing illusory duplicates?
18
Improving bad spells: Mordenkainen's sword
4
What level and class should have access to this homebrew ability-swap spell?
11
When can you do things that do not require an action?
2
Can I “High Five” my duplicates from the Mirror Image spell?