How to succesfully make one quest naturally lead to the next?

My old GM used to make our quests highly modular and separated. While this had some advantages, it gave the feeling of running through a video game with discrete levels where we just popped from one to the next as opposed to playing through an adventure, so when I GM I've always tried to drop some sort of 'lead-in' at the end of the quest to make it naturally flow to the next. Some ideas I've used:

How can I make a quest successfully 'lead' to another and make the adventure seem like one big story as opposed to a bunch of smaller quests? What are some common ways to do this that you have used successfully? I've noticed that I often just have the characters encounter a tasty piece of information that suggests where they might find their next adventure, but I'm sure there are other ways that accomplish the goal even better and was curious what ideas other people used, how they came up with them, and what they looked for to create a smooth gaming experience. :D

I'm a big fan of continuity in my games as you are. Your technique of beginning a new quest during the conclusion of the last one is good, but I think it can be even more integrated.

The idea here is to provide a heavy layering of stories so the players are never quite sure if a particular experience in a session is directly relevant to their current goals, or something longer-term. Here's a snippet from the White Wolf SAS module Chicago Workings explaining how this can work:

If you can, play this scene as part of another story, a chapter or two before you plan on beginning this story in full. That way Ellsworth feels a little more established in the chronicle before he comes to the foreground. This scene can then serve valuable double duty as a mundane counterpoint to something bizarre happening in another story — a valuable reminder that while the characters are investigating magic artifacts the rest of the city is going about its daily business.

Note how they're trying to enrich a different story with a scene from that particular module, rather than playing each scene in the module as one group.

Here are some ideas for overlapping modules A and B:

To make this doubly effective, you can try to weave your individual modules into a broader story, or at least some events that contribute to the arch of your campaign. These dotted blue lines often take the form of political intrigue, or some uber-mastermind pulling strings in your individual modules. Pathfinder's Adventure Paths do this really well, so that the final module in the path always concludes with the characters (hopefully) foiling the evil plan that was ultimately behind even the seemingly standalone crimes they dealt with in the early stages.

The downside to all of this layering is that it takes a great deal more planning and organization. Instead of just being a session ahead of the players, you have to have some idea of where they're headed next. Greater organization is necessary because with a lot of layering it's easy for players to become confused about what is relevant. If you don't have engaged players, and perhaps a note-taker, then dropping too much detail about stuff they're going to deal with in a month is going to backfire on you. You'll just have to reintroduce it when the players are ready to deal with it, and that's exactly the opposite of what you're trying to do.

It's tough, but it can be very rewarding with the right players and the right amount of work!

@Ladenedge's excellent answer is great for people who plan in advance. I'm not like that - I'm lazy. I buy modules and string them together - and that can lead to the feelings expressed in the question: No real connections, other than a quest-giver. Let me propose the Lazy DM's alternative:

Take random, seemingly unrelated/unimportant events (as written in a quest/module) that became important to the players for arbitrary reasons (missed rolls, unusual combinations of events, etc.) and make those the connective tissue. In effect, "discover" the overarching plot(s) as you go along.

An Evil Onyx Skull was the focus my party's first quest to Col Fen Graveyard (from D&D Open Grave). In the tomb, the Paladin found a plain (no magic detected) 30gp-value Onyx ring in a crypt. Instead of selling it, she decided to wear it.

In their current adventure (Isle of the Sea Drake, by Goodman Games) they cleansed a Zombie Farm, where the corpses eyes, ears and mouths were filled with a black powder: You guessed it, Onyx.

They are about to find a Ziggurat that was torn asunder by a meteor strike, with chunks all spread around for miles. It wasn't hard for me to think "Hey! I'll make those meteor out of Onyx - and that onyx has the same necromantic properties that was used for the Skull." 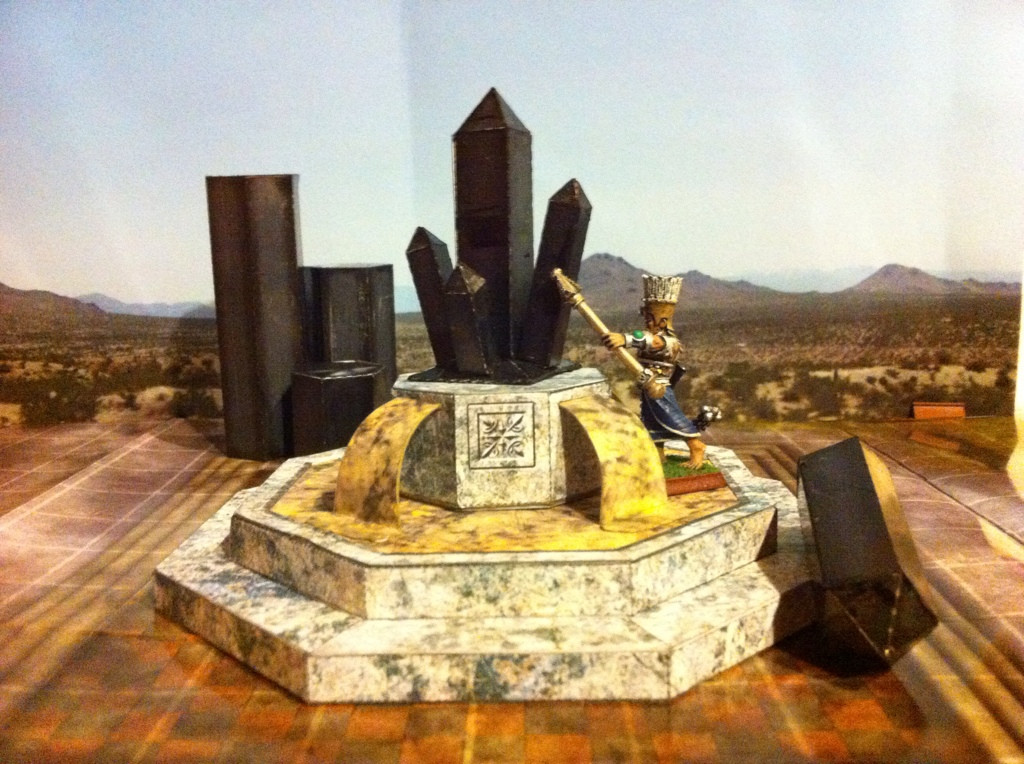 Now these unconnected quests provide a framework for future modules; The Onyx Skull is stolen to resurrect a villain, Someone is gathering the stone to construct a gate to the Shadowfell/Abyss, The Paladin discovers the ring she wears is necrotic or intelligent and can't remove it, etc. Just about any module can be glued together in this manner.

Also, every NPC that was allowed to escape can return. It is easy to replace an NPC in module 3 with the Changeling that they let go way back in their first dungeon.

Fortunately, most parties have very short memories. You can even retcon (revise history slightly) to accommodate these discovered stories. For example, before I made the Onyx Skull connection, a different party ran the D&D Redbox adventure that featured a similar necromancy skull - since I wanted to connect the two stories, the next time it came up with that group, I just added the word "onyx" to the description and no-one noticed...

It's a subtle difference from railroading, but if you have the heroic adventurers attend a command feast at the Ducal palace at level 5/6, even if they turn down the Duke's offer to work for him, he will get to know them. If things go pear-shaped, at some point the Duke will request their assistance. And at some point the Duke will DEMAND their assistance.

Everyone has to get their stew somewhere. If an entire Dukedom is off-limits to the adventurers because they wouldn't play ball with the Duke during the most recent E.L.E., they may be going on a road trip sooner than they had expected. Especially if the Big Bad wins because they weren't there to beat it.

And then you have your next quest right there...

I've recently made a discovery of a coherent article describing something I've done for years. He calls it the 5x5 Method. It's basically a way to keep organized while not focusing on the details too much because you KNOW those darn players will screw up the details anyway. It also allows for side quests and multiple focus.

This allows for (buzzword bingo) collaboratively driven episodic progress towards an overarching goal :-). Basically, it means that your players help define and then drive towards that goal as part of a team with you rather than having too many pre-concieved notions as a GM.

I'd spend time detailing it, but you can follow the link above and read about it for yourself.

Not the answer you're looking for? Browse other questions tagged gm-techniques campaign-development .

18
How can I make a "quest chain" not a blatant quest chain?

79
How can I help my PCs remember clues that they found?
22
How can I make downtime interesting?
16
How to keep track of the current situation in a setting?
24
How to reward good players, in order to teach other players by example
5
How can I keep my players interested in the main plot during an open world campaign?
19
How can I satisfy two groups who want the same quest in a West Marches campaign?
21
How to prevent discontent among the players when one player murders the others' characters?