Can a creature stay squeezed next to another?

Terrain and Obstacles on Squeezing says that one creature can squeeze to get past the other creature, but that a squeezing creature can't stop in an occupied square.

If one Large creatures is in a 15-ft.-wide hallway, can a second Large allied creature squeeze next to the first one and remain there, continuing to squeeze? Could both creatures occupy the hallway, sharing the same middle spaces without having to squeeze? Or can they not stand next to each other at all?

When a Large creature (which normally takes up 4 squares) squeezes into a space that's 1 square wide, the creature's miniature figure occupies 2 squares, centered on the line between the 2 squares. For a bigger creature, center the creature likewise in the area it squeezes into

If one Large creatures is in a 15-ft.-wide hallway, can a second Large allied creature squeeze next to the first one and remain there, continuing to squeeze?

Could both creatures occupy the hallway, sharing the same middle spaces without having to squeeze?

A creature can squeeze past a creature while moving but it can't end its movement in an occupied square.

Very Small Creature: A Fine, Diminutive, or Tiny creature can move into or through an occupied square. The creature provokes attacks of opportunity when doing so.

Or can they not stand next to each other at all?

They can stand next to each other because the large, squeezing creature only occupies 2 squares (total). For example: 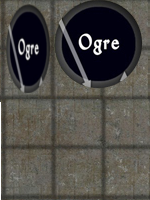 But it would be a better tactic to stagger. Staggered, there is no clear path and both creatures are free from squeezing penalties. 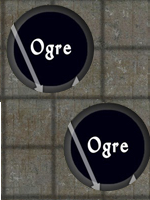 You can squeeze side-by-side, but you cannot share a space while doing so except briefly during your turns

So, you can never end movement in an illegal space. If you do, you are shunted to the closest legal space with a preference for your last occupied legal space:

Accidentally Ending Movement in an Illegal Space: Sometimes a character ends its movement while moving through a space where it's not allowed to stop. When that happens, put your miniature in the last legal position you occupied, or the closest legal position, if there's a legal position that's closer.

However, this is not particularly an issue in the scenario which you describe, since squeezing changes the space you occupy:

When a Large creature (which normally takes up 4 squares) squeezes into a space that’s 1 square wide, the creature’s miniature figure occupies 2 squares, centered on the line between the 2 squares. For a bigger creature, center the creature likewise in the area it squeezes into.

In this way, a large creature standing adjacent to another large creature in the proposed hallway requires at least one of them to be squeezing, and you could fit three such creatures if they all squeezed.

There's no indication that squeezing has to end after movement ("You can squeeze through or into a space", etc, emphasis added) or after your turn, so there's no reason to rule that way, especially since it has very wonky side effects that can be neatly avoided by using a prima facie reading of the rules.

Note that, however, there is almost no reason for two large creatures to ever do what you describe. It is almost always better to have the two of them staggered one after another so that they nonetheless block the hallway but aren't squeezing than to have one of them take a -4 penalty to hit and AC. There are tactical exceptions in some situations when neither of them has ranged attacks or spells or reach weapons, and there could be situations where the hallway they wanted to stand guard in was only 10-15' long, but squeezing is a pretty big penalty to take one when you don't have to.

Not the answer you're looking for? Browse other questions tagged pathfinder-1e creature-size or ask your own question.

2
Where do you stop when failing to move past an opponent?

10
What happens when a large creature stops squeezing in a space that they had to use squeeze to enter?
8
Can large characters sqeeze through 5' spaces between 2 enemies, or do they do something else?
15
Can Medium creatures squeeze into smaller spaces?
9
What happens when you end up sharing an enemy (or friend's) space due to a size change?
4
Penalties involved in movement scenario
6
Can a creature choose to squeeze into a space when not forced to do so?
4
How to resolve an overrun attempt from a large creature into 2 medium sized creature?
5
How does increasing in size affect adjacent squares and enemies?
4
If a creature is squeezing in a space does that affect other characters' ability to move past it?
7
What minimal space can a creature go through when squeezing?