Should this homebrew “Artillery Spell” advanced metamagic option be reworded or clarified?

I'm working on homebrewing a number of variant options for the Metamagic options available to Sorcerers, and I need some assistance proofreading the wording on one such option that I'm working on. I am not soliciting feedback on the Balance of this feature right now, and will be ignoring any such feedback.

Despite that concession, however, I am worried that it may still be too wordy or cluttered to be easily understood, and I am looking for feedback to try to make it easier to read or more intuitive to understand. Also, obvious grammatical errors or ambiguities would be good to call out as well.

When you cast a spell that has a targeted Area of Effect that isn't yourself, you may spend 5 Sorcery Points to change the spell's range to be equal to your character's visibility range. Then, before the spell comes into effect, the DM will roll four sets of 5d4, in order, and multiply each of these values by a value equal to the distance between you and your target, divided by 15. Then, for each distance:

The intent of this math is to generate a [roughly] normally distributed area within which the spell will land. The entire area within which the spell may land is intended to be a box, centered on your chosen targeted location, with a size equal to twice the distance between yourself and that location. If my math is not producing that kind of distribution, or if the wording of the math doesn't imply that kind of distribution, I'd like to know that as part of the feedback I'm soliciting.

A few additional clarifications (as they come in):

Here's an example of how this would work, using the rules I've provided, as I intend for them to function:

In total, the spell targeted a location 10000 feet away from the Sorcerer originally, but was instead pushed by this metamagic to a location an additional 3333 feet away, at a total of 13333 feet away.

Yes, this is highly inaccurate, even for modest rolls; I am soliciting feedback on the wording and clunkiness of this feature, not the practicality or benefit of this feature.

There's a simpler way to do this.

What you need is a template in a hexagonal pattern surrounding a central hex. Adapt the scale/size of the hexes to suit the spell, and all you need is two die rolls: 1d20 and 1d6. 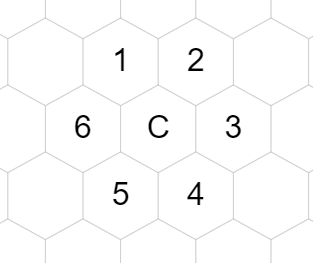 The mechanics of your meta magic...

This is borrowed from a Napoleonics game I played in the 1970's where we used a d6 template for mortar and howitzer fire, as well as a small unit game we played on sand tables for mortar fire, WW II era. It will work in ToTM games if you don't have a grid(per your comment under the question).

Adjustments to fit your situation in game ...

This answer is a challenge to the frame of the question based on a point made by T.J.L regarding how overly complicated the proposed metamagic is for this edition. (I agree with that general point).

D&D experience with "fall of shot"

We also used this kind of template for some "fall of shot" for catapults in the 1970's, on a sand table, when we were testing out the OD&D Swords and Spells supplement and various adaptations of that for small, medium, and large combats. The best use case was in siege warfare, from my recollection of our attempts to get it right. (Yes, we used that template because we'd used it in the above mentioned games). It worked well for our purposes, but was not specifically used for spell augmentation. We didn't use "DC" for a hit; we rolled 2d6 for hits and misses, modifications by range for pluses or minuses, and then a 1d6 rolled for "fall of shot" if the catapult was loaded with, basically, a big pile of rocks. (Poor man's grape shot, as it were). DC's weren't a "thing" at that point.

1 I can't emphasize enough the need to play test this home brew rather than using theory crafting to try and get the DCs right. We learned from our Swords and Spells variations to run some mock combats on the sand table to see how it would play out before all agreeing on a rule.

This ability is ridiculously complex - it involves four die rolls of five dice, multiplication, and division... and all of this before the DM even rolls any saving throws. This is going to be a nightmare to adjudicate at the table, and no DM I've ever encountered will have decided on enough positioning detail at the kinds of range you'd want to use this ability.

There is no wording that will improve this ability. The excessive complexity makes it entirely antithetical to the game design goals for D&D5E. You're trying to realistically simulate something (artillery scatter) in a game that is not meant to be a reality simulator.

There's a simpler, more table-playable alternative that gives the high degree of inaccuracy you appear to be looking for without introducing additional mechanics: as it only works with area-of-effect spells, give all the targets advantage on their saving throws. The caster is at such a great distance that he's unable to properly gauge target positions, so some of them have significantly better cover than he'd have wished for. You might even go so far as to change "save for half" spells to "save for nothing" - some targets may not even be inside the intended area at all.

Wargames with artillery typically involve a "scatter die", a die with a "hit" marker on one or two sides, and arrows on the other sides. Combined with a roll (sometimes based on margin of failure on an attack roll, sometimes purely on the weapon's properties), the arrow and the distance combine to a scatter.

Of course, this works in wargames because said scatter die is standard equipment for playing them. It's not something D&D players without wargaming experience are likely to have. The arrow-like shape of a D8 or D10's face can make a decent substitute, and you've got a built in value you could use for how far off target it goes. (Thanks for the idea, Mołot.)

After some struggling, I believe that:

1. Your metamagic does what you want it to (mostly)

I'm not quite sure that the grouping is right, but I'll elaborate that more in the bottom.

2. There's not a more succinct way to state what this metamagic does

You have about a 2 in 3 chance to get within 20% of your target distance on a particular axis; 4 in 9 on both. At 100 feet, that lets fireball work, but long distances are impossible. Even at 1000, being anything less than perfectly aimed is a miss, which to me, is amiss.

If you're just trying to bombard the countryside and you don't care what you hit, I agree with T.J.L.'s answer that D&D doesn't handle that well, but below is my proposal; fewer dice, and less thinking, my motto (well, it could be).

Artillery Spell
When you cast a spell that has a targeted Area of Effect, you may spend 4 Sorcery Points to increase the spell's range by an increment of 500. For each increment increase, the spell has a cumulative 5% chance of missing the target location. In the event of a miss, roll 1d8 to determine the drift direction and 1d100 to determine the number of feet the spell drifts off course.

You may want to play with the number of sorcery points, or the range increments, or drift percentage, etc. But the concept remains the same.

This is fast, achieves a similar effect of "far, but inaccurate", and doesn't require a degree in advanced mathematics.

I would change "spell's location" to "target point." Target is the proper keyword for a spells location.

Also I would specify the subtraction before the multiplication to make the mechanics immediately clear. Talk about the pairs of dice to move the target in two ways, rather than 4 dice that move it 4 ways. (Changes in bold)

When you cast a spell that has a targeted Area of Effect that isn't yourself, you may spend 5 Sorcery Points to change the spell's range to be equal to your character's visibility range. Then, before the spell comes into effect, the DM will roll two pairs of 5d4: one moves the target location closer/away from you, one moves it left or right.

For each pair, multiply the difference by a value equal to the distance between you and your target, divided by 15. Then, for each difference, change the target location by this amount relative to your position where positive is away/right and negative is closer/left.

Your Math Doesn't Seem to be Working

I think I understand what you're going for. Per your post, you're trying to determine the limits of a box around your targeted location. Unfortunately, based on my math below, the box doesn't seem to orient around that location, but rather more around the caster. This answer is written with consideration for a spell like Fireball which has a discrete AoE, which is a 20' radius, that is not contingent on originating from the caster.

First, I'm assuming the target is greater than 300' away so as to negate the benefit of using something like Distant Spell, which would probably be more practical. For the sake of example, let's set the distance between my Sorcerer and my Target at 600'.

Next step, I decide I want to hit them with a Fireball from that far away. The DM rolls 4 sets of 5d4 and let's just assume we roll 12, 13, 16, and 8 in order. Running the math has the following steps, first multiply each roll by the distance (600') and then then divide by 15.

Doing this nets the following:

This nets a distance of 40' behind the caster.

This nets a distance of 320' to the caster's left.

The net result of these operations, if I'm reading your intent correctly, would cause the fireball to land at a location 40' behind the caster and another 320' to their right. This seemed to happen very easily as well given the anticipated ranges this might be used.

One of the issues with the math is that it's very 'swingy' based on how it's written for the typical distances where this might be used. As a result, very often there is substantial deviation that can occur, which is permitting the targeting to go very far forwards and backwards as well as left and right.

Due to this swinginess (technical term, patent pending), it's nigh impossible to effectively target with this metamagic. You effectively would need to have the the third and fourth rolls be equal so that the spell lands near the target. Furthermore, the first roll needs to exceed the second in just such a way as to cause the spell to actually land on the target, but not overshoot it.

Not the answer you're looking for? Browse other questions tagged dnd-5e sorcerer metamagic homebrew-review or ask your own question.