How do I use Passive Perception to have some characters notice parts of the environment?

I'm new to DM'ing and have an issue I'm not sure how to deal with. The situation is this: It's pitch black outside and the PC is walking, with a lantern in hand, toward a building. A bird is perched atop the building, watching the PC. The bird is not attempting to hide in any way, but it's also not moving/squawking/drawing attention to itself.

I'm trying to figure out if the PC perceives the bird. If I blatantly ask the PC to roll a perception check, he'll realize there's something worth perceiving and just sit out there rolling until he sees the bird.

The question is, how do I roll against the PC's passive perception? This might seem exceptionally basic for experienced GMs, but I really don't know the mechanics of it. The PC has a passive perception of 17. Do I just roll a d20 against that with no bonuses? That seems too simple. The bird has no stats.

Any advice is appreciated. Thanks.

In and of itself, a bird on a roof is not something out of the ordinary, and not something that would (or should) alarm a character.

I assume from the fact that you are asking the question, that by noticing the bird, and divining its purpose, the character can gain some advantage in the near future.

So to me, this isn't even a perception question, but an insight one - I would let the bird be seen, almost automatically, but only address its significance if the PC passes a passive (or active) insight check.

I would ask the player if they are keeping an eye out for trouble or anything else in particular. If they claim to be, ask for details of what they are looking for, and then give answers appropriate to the questions that are asked.

DM: You proceed down the path towards the building. The light of your lantern illuminates the way ahead, but darkness pervades on either side of you. Do you make right for the building, or do you want to play it safe a study your surroundings?

PC: Play it safe of course. What do I see?

DM: Well, there are some trees on your right. You hear the rustle of what might be wings of a small bird pass overhead. Are you looking for anything in particular?

PC: Well, am I sure the noise is just a bird and not something bigger? Do I see or hear anything threatening?

DM: You're not totally sure about the sound, but you don't see or hear anything threatening.

If your players are going to feel betrayed when the significance of the bird is sprung on them, have them hear a bird call as well as the bird above, and then if they ask about birds, let them see the one on the roof, and maybe another in a tree.

If your players don't go for the idea of player skill (embodied here by the need for the players to divine that birds are significant), then a similar scene can be played out, bringing passive insight (or perception) into play by giving out details if their passive score beats a medium or high difficulty for their level.

As for what to compare the PC's active or passive perception or insight against, the Rules Compendium p126 has the difficulty class by level chart.

I would suggest that this is medium or hard to detect (as significant) for a low level character - so I would pick hard for level 5, which is a target number of 22.

Never ask your players for a skill roll you don't want them to fail.

(Credit to @Rantar in the comments.) While passive perception isn't a skill roll, it is still a check against a skill.

Is there a reason to not spot the bird? Failure is boring when it does not advance the plot. Mechanically speaking, if we look at the rules of hidden club, the only time a character is unaware of an element in their environment is when it makes (and can make) a stealth check that exceeds their passive perception.

Here's the thing. Failure tends to be boring. 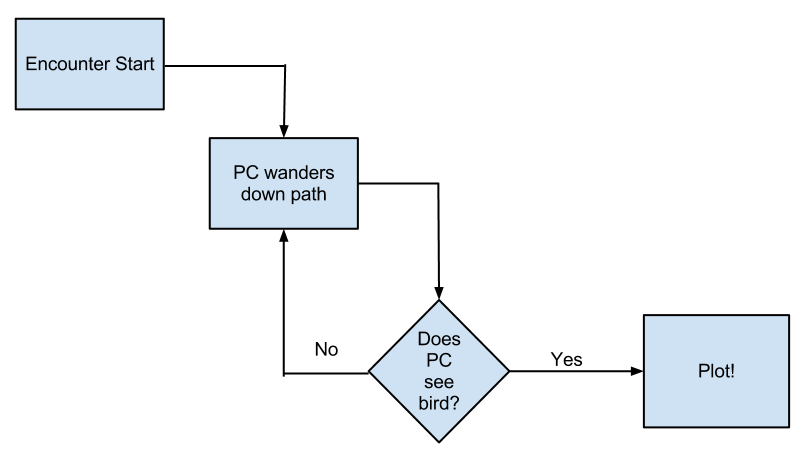 Then you're doing it wrong. The trick is to enlist the player in setting mood and atmosphere. The essence of a skill check is a decision tree: if the players fail a check or a challenge, a disruption to the story is introduced. However, there is never simple failure.

Saying "no, you don't find the key that unlocks the magic door that guards the dragon's vaults so... you go home now?" is boring.

While rolling a dexterity check in lieu of a stealth check versus the passive perception is acceptable, the real question is does failure introduce anything useful to the story?

Why not ask "Does your character notice the ominous crow on the roof?"

Here, the player can characterize her character through success or failure, but regardless of narrative outcome (supporting character agency) the tone of the game is supported as players become aware of the foreshadowing.

The nature of Passive Perception is that you don't roll it. If the bird would be spotted with a roll of 17, then you reveal the bird to the player. If not, not. It's the equivalent of the "take 10" mechanic from earlier editions of D&D, meant to minimize unneeded rolls.

You're right - this is an easy one for an experienced GM but each may answer it differently depending on his/her style as evidenced by the previous answers.

As I see it, it is up to you to decide if he sees it or not. You have to use your own experience and judgement to determine the outcome.

Some things to consider:

It all comes to a decision you have to make to enhance your game. If you make the wrong decision and your group grumbles at this decision, then next time you know better.

As to your particular scenario, I would roll the dice behind the screen (or your hand) and go from there - Roll 15-20? He sees the bird. Roll 1-5? Snicker and roll your eyes and move on. Roll 5-15 maybe give a hint (flapping wings, scratching sounds of the birds talons on the slate roof, something that the PC perceives but cannot put his/her thumb on.

There are some other factors: the bird has a modifier to stealth based on size (tiny I think is +5, so value of 15) - so a passive perception of 17 would notice it. The lantern gives vision out so a certain radius, so the bird has to be within this radius.

However, a bird might be nothing out of the ordinary, so I would suggest an insight check (again as has been noted) - check vs. character's passive insight. This could be easy, moderate or hard depending on what clues the character might already have - or how unusual the spotting of the bird might be under the circumstances. If the insight check is not made, I wouldn't even tell the player about the bird, since it is nothing out of the ordinary.

VERY specific to this scenario, there is one reason they may notice a bird that is specifically looking at them by the Cats Eye Effect most animals that have good night vision have a shiny reflective layer on the back of their eyes. This has the overall effect of reflecting any light shone at it directly back at the source of light but only if the eye is looking at the light source.

This is roughly how it will appear 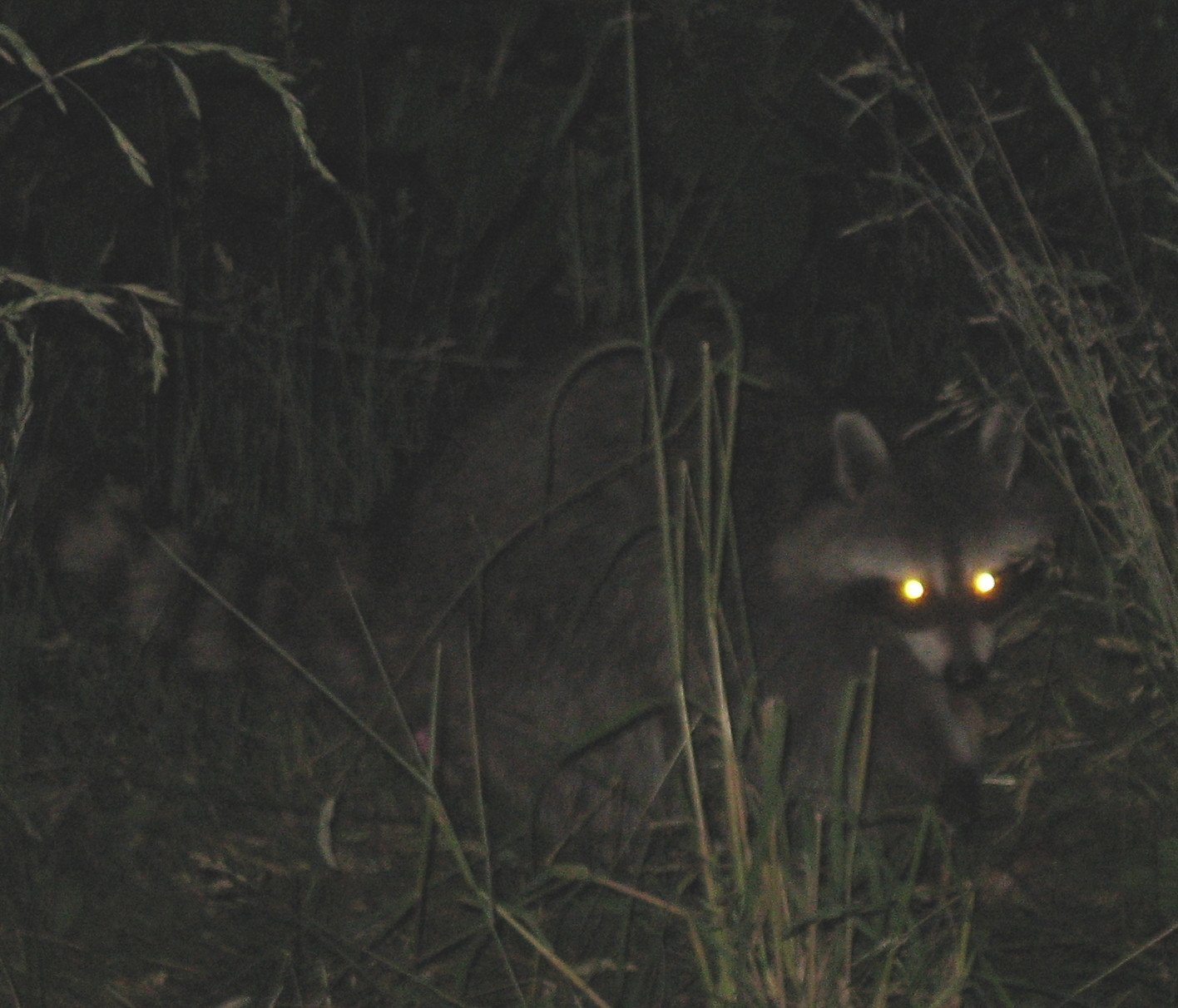 Though not as prominently as this is from a camera's flash bulb but eyes do stand out.

So yes, a Bird will stand out in the light precisely because: (1) the PC is holding a lit lantern, and (2) the animal is looking directly at the PC

The character can be either aware of this natural phenomenon or be noticing it for the first time.

Then you simply add it in as part of the details of the scene, and the eyeshine is why this particular part of the otherwise dark and hard to discern scene would be described rather than, say, the mouse near the tree or that the trees along the path are oak trees and the path is made of pebblestones and other excessive details.

This is to stop it being

"There's a bird there"

Though be happy to embellish a little, have nice touches like you didn't notice the sound of the crickets till they suddenly all stop at once and then it's so quiet the sound of your own breathing is deafening. Roll from there, if they hold their breath now their fast heartbeat, now would be the perfect time for someone to walk out of the woods and have it be revealed to be a friendly NPC who noticed the lantern out of their window.

Tell him that, because his character doesn't see much, he will need to roll for perception every now and then. Make the player roll a dice every time his character walks a given distance (depending on the total length of the walk, no need to roll every meter if he walks a kilometer).

You then decide that he could see whatever you want him to see between this point and that point. If he succeeds in throwing his dice at that point. He notices.

The walk is 50m, rolling dice every 5m. Chances to see a bird located at 25m.

If the dice is within the percentage chance of seeing it in a given spot, the PC notices it.

The player will keep on rolling until the end of the path, so he'll never know if there was anything else to notice…

I guess you could use a passive perception check without a die roll and anyone who succeeds "feels uneasy" and then make that 'uneasy character(s) roll an active perception check to see why they feel uneasy etc? And then take it from there/ ie roll against the bird's stealth and other factors/mods etc?? This feeling 'uneasy' doesn't really give too much of a clue away, but creates enough suspense to make the character focus more to try and glean what is bothering them? ie/ "you feel you are being watched? " I guess if you don't always want a passive percentage to succeed or fail (it must always fall into one of these categories if there is no roll) you would have to make a sneaky die roll as a DM.

Not the answer you're looking for? Browse other questions tagged dnd-4e gm-techniques or ask your own question.

22
How do I kidnap my characters without bending the rules?
13
How to roll perception checks for characters who aren't actively looking without arousing suspicion?
4
How do I use passive insight checks?
1
How do passive skills work?

11
How compatible are D&D 4th Edition and Essentials? Can you use Essentials encounters with 4th edition characters?
5
Optimizing a rogue as an assassin
5
Do attack powers that have an effect of marking a target use the class's defender mark or some other version of a mark?
4
How do I use passive insight checks?
22
How do I kidnap my characters without bending the rules?
6
How can I convert some of LotR's main characters to D&D 4e?
1
How do I determine passive insight/perception?
15
How do I deal with extremely high passive perception?
6
Is it incorrect to use Passive Insight to tell Players what their Characters already know about NPCs?