Is there a difference between the meanings of the terms "module" and "adventure"?

Is there a difference between "module" and "adventure", and where and when did the terminology branch?

My impression is that "module" is an older term, but I am unsure if this is correct and when the branching happened, and if there is any other trend in the use besides age. Another guess would be that "module" is more tied to D&D-like games.

There is no difference between a module and an adventure. Module is simply an archaic term for adventure.

Early TSR D&D/AD&D adventure products called themselves "modules," but in their covers and text made no distinction between an "adventure", a "module," and an "adventure module," they used the term interchangeably.

Here's a picture of X1 Isle of Dread from 1981. The header claims it's "Dungeon Module X1." The subheader declares it "A Wilderness Adventure." The text says "first in a series of adventure modules." The oval at the bottom calls it a "Special Introductory Wilderness Module." 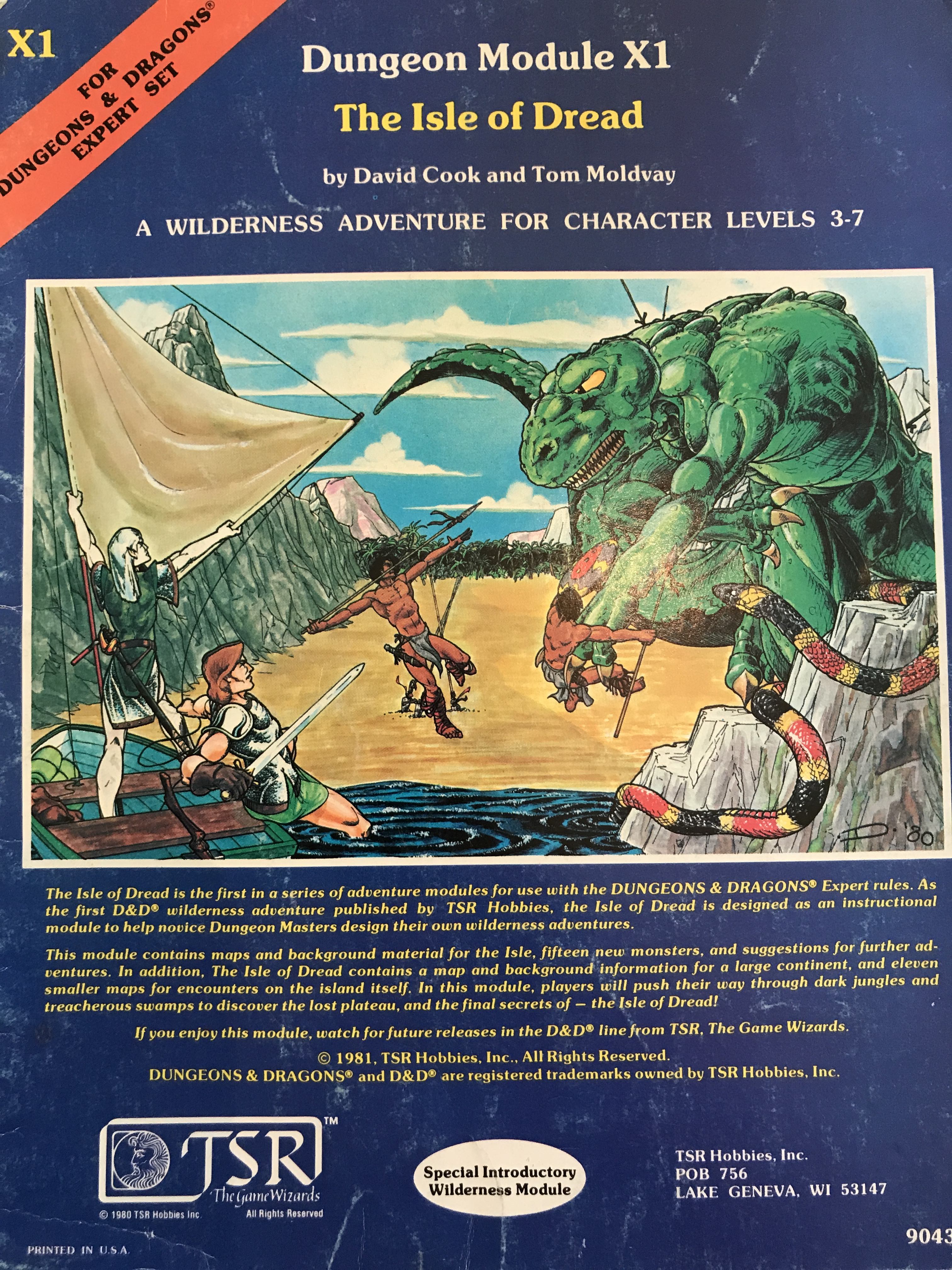 "Books - Modules - Miniatures, the Dragonlance Saga Continues," proclaims the back of DL3 Dragons of Hope.

Other publishers didn't adopt the "module" nomenclature as much. On my various non-licensed Mayfair Role Aids AD&D adventures and sourcebooks from the 1980s, they studiously just call themselves "adventures."

But are modules setting independent?

Many were, of course, with the idea that you could use them in your own campaign world. But there were many modules explicitly set in Greyhawk or another published game world. T1-4 Temple of Elemental Evil proclaims on its cover "A Monstrous Adventure! Includes Tl , The Village of Hommlett and the long awaited T2, Temple of Elemental Evil set in the WORLD OF GREYHAWK Setting." There was also a WG series of modules that was not just set in Greyhawk but got deeply into the locations, NPCs, and metaplots of the setting beginning in 1982.

But are modules more - "modular", and not full campaigns like an Adventure Path is?

There was no term "Adventure Path" back then, but when they put together larger arcs of adventures they were still called modules. Take the plot arcs like I3-I5, Desert of Desolation series. When republished, the foreword talks about "[the authors] provided an excellent set of adventures in the original Desert of Desolation Series, I3 through I5. The story that held these adventures together was of a campaign style, an epic quest against seemingly insuperable odds." It was recognized that you could have series of adventure modules that did provide an entire campaign.

Take D3 Vault of the Drow (1980) - its cover says "This module can be played alone, as the conclusion to module D1-2 (Descent Into The Depths Of The Earth), or as the third module in a series that forms a special extended adventure (G1-2-3 Against the Giants, D1-2, and Q1 Queen of the Demonweb Pits). (Eventually it was republished as GDQ1-7 as one large softcover.)

Or T1-4, Temple of Elemental Evil, which when published in one larger softcover, its cover refers to it as "Campaign Adventure," but then in the Introduction starts in with "This module is designed for..." Modules could have plot and be interlinked and have many parts.

In fact, I can't find the term on any of the products themselves, but when the original combination modules (T1-4, A1-4, GDQ1-7, I3-5) came out, we called them "supermodules." In fact, that has to be somewhat official because it's in the product name on Amazon!

TSR continued to (somewhat intermittently) use the term “module” through 2e in the 1990s, but left the terminology behind with the advent of 3e.

Basically, "module" was a term TSR started using early in D&D, probably because earlier wargames had "expansion modules", and it stuck for a decade, but then gave way to the more readily understandable "adventure", especially as other publishers who didn't start with that term published games and supplements.

All "well to me adventure means this and module means this" statements are basically made up out of people's minds, except inasmuch as "module" reminds one of 1970s-1990s D&D.

The first TSR (A)D&D adventures described themselves as "modules" and the oldest ones I have are from 1978. They didn't explain precisely what "module" meant. The general opinion in the late seventies and early eighties was that this meant they were intended as plug-in modules for an existing campaign.

At the time, most DMs had their own, personally created, setting, which they ran regularly. Published adventures needed to be able to be dropped into such a setting, and the DM was expected to modify them slightly to fit into their campaign background. The nearest thing I can find to an explanation from TSR as to how modules should be used is this paragraph from the introduction to S1 Tomb of Horrors:

The starting information for the module depends on if you are using the Tomb as an insertion into your own campaign, as a section of the WORLD OF GREYHAWK, or simply as a one-shot exercise for your players. Because of the variableness, the information for starting is stated so as to assume the expedition has arrived at the site of the TOMB OF HORRORS. As Dungeon Master, you may fill in whatever background is needed, and if this is a section of a campaign, players cannot have obtained the Legend information without consulting sages, casting legend lore spells, finding the information in some arcane work, or whatever; all prior to locating the actual locale of the Tomb and then getting to it, so that background will have been accomplished. (When this module was used at Origins 1, referees were instructed that the hill had been found in the Vast Swamp, and the party had arrived there in barges.)

Publication of whole settings, such as Dragonlance, Forgotten Realms, and so on, came rather later from TSR. The names of settings run by game authors, such as Greyhawk and Blackmoor, were known from mentions in rulebooks, but they hadn't been published. Other publishers, such as Judges Guild, published settings earlier, but the TSR products were perceived as higher quality.

Most modules were complete adventures, sometimes linked into series. I don't know of any counter-examples, but that does not prove there weren't any. Not all published adventures are modules: if they're firmly set in a particular world and part of a metaplot, they certainly aren't modules, and I'm not familiar with Pathfinder's Adventure Paths and other newer forms of adventure publishing.

Not the answer you're looking for? Browse other questions tagged published-adventures history-of-gaming terminology .