How can I get a Hell Hound as a Summon Monster 2 option in PFS, as early as possible?

Hell Hound is listed in the Summon Monster II alternative summoning list. This creature seems nice to be used by my friend who is a True Neutral Unchained Summoner with a focus on actually summoning stuff. Hell Hound is normally on the SMIV list, listing the source as "AP29", which is, as I understand it, some Adventure Path.

How can one get access to this monster, preferably as early as possible? Does one have to play this AP to get Hell Hound as a SMII option? My friend is currently level 1. We are playing under Pathfinder Society Organized Play rules.

You cannot get it earlier as a summoner

AP 29 is Mother of Flies (Council of Thieves #5). And you are not required to play the adventure to benefit from that rule.

Hell Hounds are added to the Summon Monster II list of Asmodean priests (clerics and other divine casters who worship the god). The full list of spells added to their list on that book is as follows:

This information was later reprinted on the Monster Summoner's Handbook Player Companion (I strongly advise you get a copy of this book), which has a list of all expanded summons for priests of certain deities: 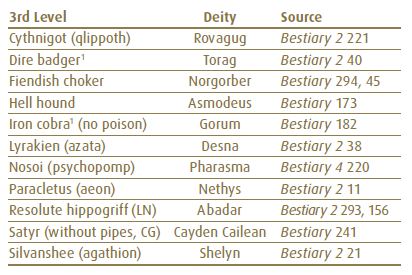 Clerics who are priests of one of Golarion’s major gods also benefit from having creatures added to their summon monster spells to represent the influence of their specific deity.

As for who can become priests of Asmodeus, Inner Sea Gods has the following entry:

As you can see, summoners are not part of Asmodean church, nor they get divine powers from worshipping Asmodeus. As such, they cannot gain the benefits of being a "priest", which includes several things on top of being able to summon hell hounds sooner.

However, as noted by one of the PFS Global Coordinators, a summoner could qualify for traits (like Contract Master) and feats (like Devilish Pride) restricted to worshippers a specific deity if they note that down on your character sheet, and meet the necessary requirements. But the restricted summons are not mentioned.

Pathfinder Society (PFS) uses the Additional Resources list to specify what is and isn't allowed in the campaign beyond the core rulebook. These additions are listed out by book. The Mother of Flies entry includes this text

This seems to indicate that the rules for including a Hellhound on some Summon Monster lists are allowed. Note that to be able to use those rules in a Pathfinder Society game session, you actually need to have an owned copy of the rules on hand (i.e. a pdf or hardcopy of the Adventure Path volume, in this case).

Sadly, I don't currently have access to the adventure path book, and cannot verify exactly what this article allows, or to who. If the text quoted elsewhere is accurate, though, it is only Clerics who worship Asmodeus who can use this option. This would mean the earliest you could have access to this option would be as a 3rd level Cleric of Asmodeus. Summoners would not be able to access this option.

Not the answer you're looking for? Browse other questions tagged pathfinder-1e spells summoner pathfinder-society unchained or ask your own question.

9
What is the full list of monsters that can be summoned with the Summon Monster spells?
12
Ways to solve balance problems with a Master Summoner
2
How does Superior Summoning interact with effects that increase number of summoned monsters?
7
How does diehard work for summons?
2
What feats work with an unchained summoner's SLA?
1
Which spells or tactics allow a low-level non-blaster Arcanist to deal with creatures immune to mind-affecting spells or who have a lot of HD?
0
What to optimize a Skald for in such a party?
4
Are there any Sorcerer-only spells officially in Pathfinder?
2
How, as a Pathfinder DM, can I help my players create characters at the correct optimization level for a given adventure?
6
I found a homebrew summoner/eidolon class online; is it balanced?