There is an alchemist (or other splash weapon user) "T", throwing her splash weapon at a target "X" that is within T's weapon's first range increment - so if T misses, her weapon will impact one square off the original target (see linked question for details to that)

The twist here is: Target is standing with its back against 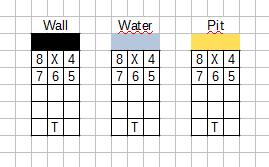 If the thrower T misses, and rolls 1,2,3 on her miss roll, what will happen?

I think this boils down to wether you consider splash weapons to be "explode-on-impact". At least for Alchemists Bombs, which are (Su) - Supernatural you could argue that they don't just explode on a mechanical-physical basis, but the Alchemist wills it into exploding (?)

Would love to hear your takes on that.

1) Pretty simple; it impacts the square with the wall, doing splash to 8, X, and 4. Nothing's actually stopping the splash weapon from exploding in its defined square; instead of striking the intended target, it impacts the wall above their head.

1b) 100% GM Fiat here; if the holes are significant in number and size, the splash weapon could enter one if the GM feels it appropriate (possibly decided by a d100 roll), which might allow for splash at the squares on the other side of the wall. 8, x, and 4 still get splashed, though, since it only deviates one square.

2) Water's got a pretty good surface tension, and it counts as a solid surface for a lot of effects; pertinent to this conversation, we have this tidbit.

Thrown weapons are ineffective underwater, even when launched from land.

If you're chucking something fragile hard, and it hits the water, it can't continue on past the water's surface, and will, subject to GM Fiat, most likely burst upon striking that square, doing splash as normal. Alchemist Fire, specifically, doesn't work underwater, since it's a nonmagical fire, and would do nothing at all since the water would extinguish it.

2b) Ice is solid. Unless it's exceptionally thin ice, it behaves like normal ground with a couple modifiers (the DC to move across it and the difficult terrain modifier). Splash weapon behaves as normal. Note it deals damage to the ice as well, which may cause it to break or melt.

3) The splash weapon cannot strike a surface to break, so it falls into the hole. It doesn't go straight down, so it'll probably impact a wall at some point and burst, but it's not likely to be in any useful manner.

3b) Same as above, but if anything's flying in the square directly above the pit they get splashed.

Edit: Also, splash weapons are all "break on impact" according to the rules for the "Throw Splash Weapon" attack.

A splash weapon is a ranged weapon that breaks on impact, splashing or scattering its contents over its target and nearby creatures or objects.

Not the answer you're looking for? Browse other questions tagged pathfinder-1e combat ranged-attack alchemist throwing-things or ask your own question.

4
Missing with a splash weapon

5
Splash weapon area
6
What does it take to throw a splash weapon?
5
Explosive rounds in Pathfinder
2
Alchemic fire/bomb vs. Swarm of Fine creatures
5
Alchemist using splash weapon feat to attack square and redirect to invisible creature
0
How does the magus arcana "pool ray" interact with ranged spellstrike?
3
Does sniper's eye allow sneak attack damage with splash damage?
3
Does the feat "Splash Weapon Mastery" work with the alchemist discovery "Healing Bomb"?
4
Missing with a splash weapon
4
Is the attack roll to splash holy water or oil on a target within 5 feet of you made with disadvantage?