How to Even Begin Understanding the Underworld's Geography/Cosmology?

Each time I get curious about WtO and try reading about parts of its setting, I hit a lot of crosslinks but am having trouble envisioning the basic zoomed-out geography and how they all relate to each other. Maybe I'm missing some sort of cosmological assumption and don't know how to ask about it because it's an unknown unknown.

Sometimes I encounter writings that give an impression that some of these locations are 'stacked' in the three spatial dimensions but vary by a fourth spatial dimension coordinate, and at other times I have an impression they're meant to be navigable by spatially-3D beings; which one is it? How exactly does a Wraith move from the 'normal' world where it can possess computers and scare mortals to the 'esoteric' one with maelstroms and kingdoms? What are the connecting paths or 'paths' like?

I am also unsure about whether some geographical terms are meant to be parsed mostly literally, or very metaphorically (e.g. whether 'river' with 'shores' refers to a watery path surrounded by solid ground, or is more like a current, and whether the Tempest is meant to be visualised as a literal water in which one may swim or drown).

This is left intentionally vague for the storyteller to best interpret as the story requires. And taking every intepretation across a chronicle would certainly not be out of place for a game of W:tO.

As a rule of thumb though you can think of the Shadowlands part of the underworld as the analogue to Earth merely superimposed and twisted over it where space makes sense in a 3d manner, with occasional warping around sites of destruction, the necropoli/cities, and most dramatically, nihils. You can play an entire chronicle in just the Shadowlands.

Transitioning into the Tempest and the dark kingdoms however warps things.

At every train station in the western Shadowlands for example, at the stroke of midnight, the midnight express pulls into every station and it leaves every station to invariably arrive in Stygia as one train. Travelling through the by-ways or safe paths through the tempest to arrive. A few of these ways are stable and are controlled by the dark kingdoms which they use to exert their influence on the shadowlands, claiming territory for reaping and other purposes, others need to be fought through by talented Harbingers, wraith who wield the Argo arcanoi.

The tempest is pretty vague, which is appropriate for something supposed to cause abject horror. In some places it's referred to as a bottomless stormfront in others a great turbulent ocean. Apart from Argo practitioners though, wraiths who find themselves exposed to the tempest will invariably end up falling through to the labyrinth, and maybe even oblivion. The only stable "Islands" being the dark kingdoms fortresses and the far shores, the later of which few can safely reach.

Artistic renditions of the World of Darkness cosmology are few and far between. There was a french user who released a map a year ago which the community seems to believe if nothing else, gives it a good try. The Redditor U/Diceplayer translated it into English and discussion can be found here it includes the "places" found within Wraith the Oblivion in the lower half: 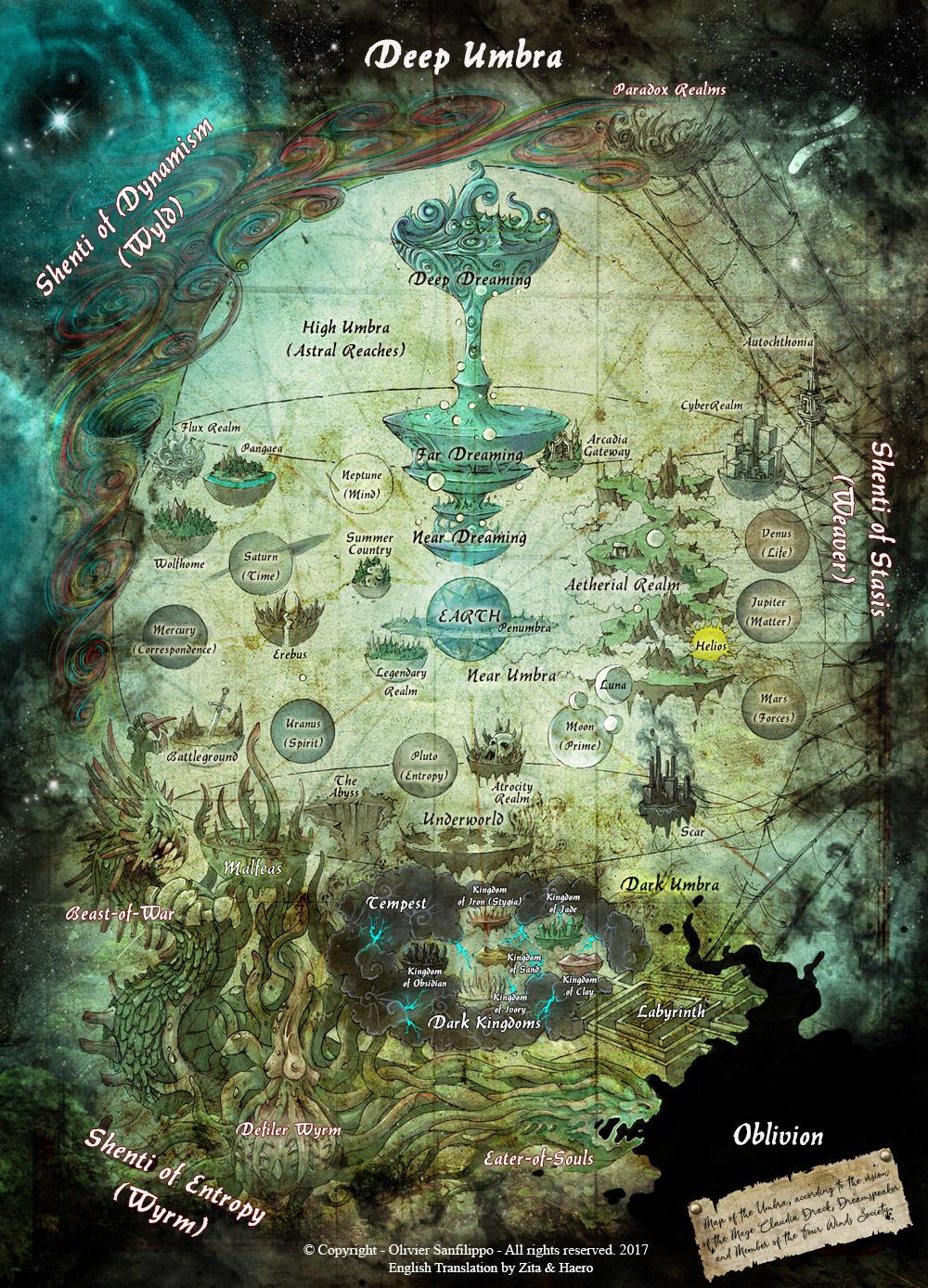 Not the answer you're looking for? Browse other questions tagged world-of-darkness lore cosmology wraith-the-oblivion .

16
What are the planes of D&D 4e? Where did they come from, and how are they connected?
3
How Can I Understand Anima's Cosmology, Particularly with Regards to Time
10
How is that even possible that Camarilla and Sabbat have infiltrators?
17
About the Cosmology of Mage the Ascension
5
The description of politics, geography etc of Forgotten Realms
47
What differentiates "Gods" from other entities in the Forgotten Realm cosmology?
14
Are the positive and negative planes inner or outer planes in the Great Wheel cosmology model?
5
How can a vampire kill a ghost or something connected to the Umbral world?
8
Which Planes Border the Astral Plane in the Great Wheel Cosmology?