What is "desert glass" and what does it do to the PCs?

In Xanathar's Guide to Everything, there are environment-specific encounter tables for various PC levels. In the Desert Encounters (Levels 11-16) on pages 96-97, the result of 36-40 is "1d6 square miles of desert glass", but I can't find that term mentioned anywhere in this book or any others.

So first, what is it? An expanse where the ground has been turned into glass? Is it an environmental hazard? An mere oddity to wonder at? What does this "encounter" mean for the players?

It's a real-world thing, with no special game effect

Since it seems to have no special game meaning, we defer to the real-world meaning of desert glass:

There are various types of natural glass found in deserts. Desert glass can be formed from the silica in sand as a result of lightning strikes or meteor impacts.

Of the various types, Libyan desert glass might have the most distinct appearance: 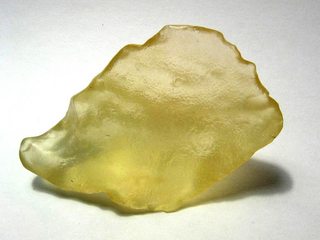 The Wikipedia article also includes an image of a piece of Libyan desert glass carved into the shape of a scarab, used in the jewelry of ancient Egyptian pharaoh Tutankhamun: 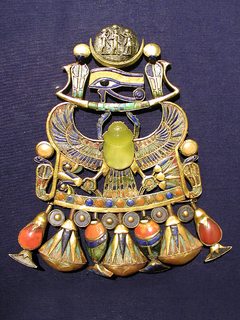 So what's the point?

Given that it has no special game meaning or effect, you might wonder why it's in the table. Only the designers can say for sure, but I suspect it's there just for flavor - perhaps the players will find it intriguing, or they'll give it a passing look and move on. No more details are provided, so it's up to the DM to adjudicate whether it's worth anything or what the PCs might be able to do with it (e.g. managing to retrieve some and maybe sell it or get it refined).

Some other examples of flavorful but potentially "meaningless" encounters in the encounter tables on p. 92-112 (some might also be references to other pieces of fiction or media):

...And so on. As you can see, several of these can be used by the DM as hooks for some other encounter or plot, but that's left to the DM. The same is true of the desert glass one.

Not the answer you're looking for? Browse other questions tagged dnd-5e treasure environmental-hazards or ask your own question.

1
What sort of insulation and/or protection does the spell "Secure Shelter" offer?
14
Assuming your PCs can breathe underwater with a spell, what is the maximum depth they can go without assistance?
9
What is canon for the creation of the Great Desert of Anauroch?
11
How can I determine how much of the loot the PCs find?
7
What damage does one’s clothes bursting into flame deal, and what is needed to put it out?
9
What's the best option to magically sustain a desert caravan?
8
The DMG has rules for Extreme Cold, but what about less extreme cold effects?
6
Are GMs obligated to hand out all possible treasure and loot in an adventure, or can GMs deny PCs printed loot?
4
What are the RAW rules for cold weather exposure?
21
What is the rarity of my homebrew Glass Sword?