How many arrows is an archer expected to fire by the end of the Tyranny of Dragons pair of adventures?

If an archer was expected to buy all of their arrows up front, what is a reasonable estimate of how many arrows they would need throughout the coarse of a full Tyranny of Dragons campaign?

This question was asked with the assumption of a standard party-size.

This would cost 150gp and weigh 150 lb. Except, they get half their arrows back if they search for them so, half of all that. 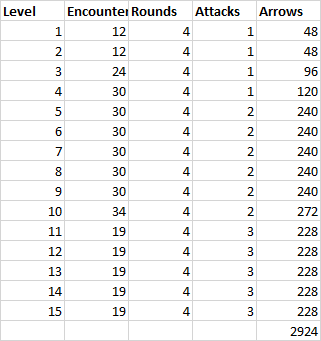 Now, the 357 encounters is possibly on the high side but if you do all the side-quests and have a lot of random encounters, I can see you getting there.

Well, you can probably figure a normal fight runs four to six turns, and a big fight or boss battle might run twice that long. So multiply by the number of fights in the modules and the number of shots per turn, and you should be able to approximate it from there.

But there isn't a fixed number of fights in those modules. It depends on how your skills roll out, how long you take, what you choose to do, and a lot of other things. I don't think it's possible to even vaguely approximate how many combat-rounds there might be across both modules because it just really depends.

Not the answer you're looking for? Browse other questions tagged dnd-5e published-adventures ammunition hoard-of-the-dragon-queen rise-of-tiamat .