How much detail should I include in medieval maps for players?

I am running a campaign in the Eberron (DnD) setting, but really, this question could apply to anyone running a game in a medieval setting.

I wanted to know what level of detail/accuracy to include in the maps players purchase to provide the most realistic gaming experience. Certainly, it would be easiest to merely give the players the "completely accurate" maps provided in the campaign setting book, but I am specifically wondering what information would have been likely to appear on a medieval map (proper scale? Minor settlements and villages? Geographic features?) and how accurate this info would have been compared to "reality". Moreover, aside from the historical consideration, what kinds of info do DM/GMs feel best aids in story development, progression, and flavour?

Think about what the purpose of such a map is. Medieval maps tend to fall into three categories:

If it's for pilgrims and merchants traveling by road, it'll have all the major roads marked, along with inns and convenient places to stop to water the animals -- and it won't describe the wilderness or the sea at all. Take a look at the Tabula Peutingeriana for an example of a classical/medieval road map. 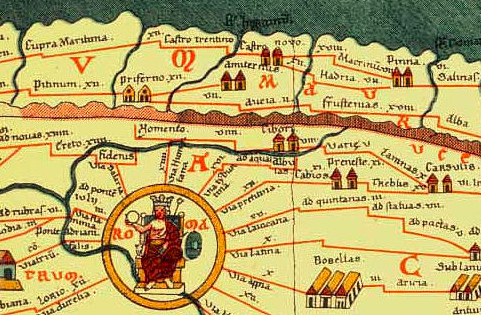 This shows how far it is from one town to the next, a few other things you might find along the way, and some general indications of where the mountains and rivers are to help keep you oriented.

Unfortunately, it's out of date. Really out of date. This copy was made in the 1200s, yet it shows cities and roads that hadn't been around since the fall of the Roman Empire. It even shows Pompeii as a city, which had been destroyed at least eleven centuries earlier.

If it's for seafarers, it'll have all the harbors and rocky shoals marked, along with notes about winds and whirlpools in the sea. It won't say anything about what you'd find further inland. Take a look at some medieval seafarer's maps, called Portolan charts. 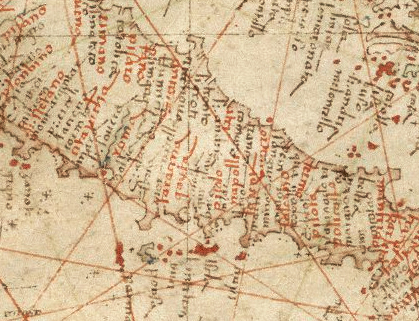 These actually do a pretty good job of showing what you need to know. The coastline is densely filled with ports here, divided into major and minor ones by the color of the text.

If it's a map of the whole world, it'll try to include all the regions that the mapmaker has ever heard of. The areas near home will be fairly good, but the further away you get, the more vague and fantastical you get. Take a look at any of the Mappa Mundi and see how Europe and the Mediterranean tend to have all the right parts, while India and China get pretty speculative. 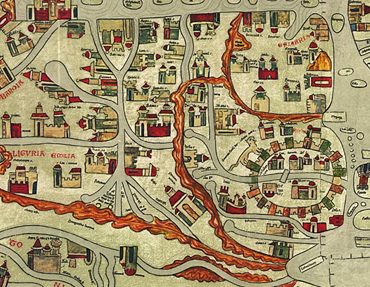 Many medieval world maps were more theological/philosophical than geographical. A typical Mappa Mundi puts the world in a round shape that's easy to comprehend, with Jerusalem at or a bit above the center, and the Garden of Eden towards the top (which is east, not north).

Some medieval world maps were much more accurate. Ptolemy, in the 2nd century, compiled a list of coordinates of locations for places throughout the known world, giving longitude and latitude for each. With these coordinates (and a projection of a sphere onto a flat sheet of paper), people during the Middle Ages could (and did) draw up a pretty decent world map. 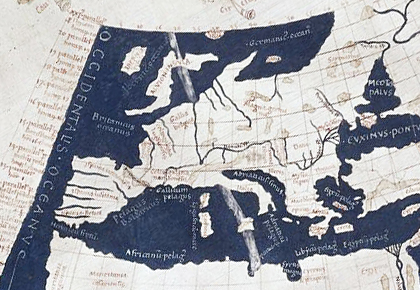 Modern maps often aim for somewhere in the middle. All the maps above are of the same region (except for Ptolemy's map). Now take a look at how Google Maps renders it: 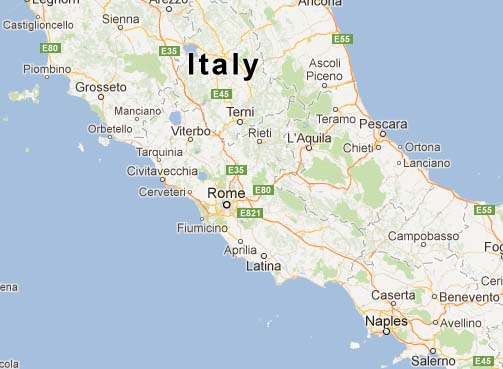 This map doesn't tell you how long it takes to get from one town to another, it doesn't tell you anything about the bays and harbors, and it doesn't even show rivers at all. If you're looking for those features, one of the medieval maps would be better.

The modern map is like Ptolemy's map: it's all about getting the features in the right place compared to each other. The medieval road map might tell you exactly how long it takes to get somewhere, but the modern map tells you exactly where it is.

A traveler doesn't need to see every little kink in the road or every administrative boundary. They need to see how to get where they're going.

Real-world medieval maps tended to be a mix of indicative and artistic and in many cases draw by people that had never been to and barely heard of a place. They would have used in many cases information that was word of mouth from many people and could be contradictory. Hence the map you bought could be anything from a nice picture for the wall and useless to something that would be roughly useful to tell you the correct ancient road from major city to major city.

In a highly magical setting like Eberron I can't see why there would not be highly exact maps, even a scroll like Google Maps where a spirit could be instructed to show a portal to a place high above the real place.

You need to decide how much magic there really is and how it affects the world. A few years ago the idea of everyone having access to something like Google Maps was a pipe dream, now it is common and everywhere.

As @DavidAllanFinch said, our modern concept of accurate maps wasn't really common in the Middle Ages. They tended to be more figurative, lacked a lot of our modern methodologies, and further more, didn't try for a 1:1 representation, which was usually held in lower esteem than a moral representation. See a nice example here.

In general, though, if you want to have a realistic historical medieval feel to your campaign, I'd suggest reading Ars Magica. A lot of work was put into the game to give a convincing medieval feel, with many sourcebooks exploring medieval life. You can download the previous edition, the 4th edition, for free on Atlas Games' website. Here's a large version of the Mythic Europe map from Ars Magica, which can give you a feel for that sort of map - you get the coastlines, the forests, and the major cities in relation to each other, but no precise coordinates.

Mind you, you'll soon find that Eberron is very far from historical realism, even more so than most standard D&D campaign settings.

Take a look at Old Maps Online; which has a large collection of historical maps available. One Caveat; despite the timeline slider going back as far as 1000AD; there don't appear to be any maps from before the mid 16th century available.

If you want to go with a map that has a medievalish feel, you could go with the John Ogilby style: http://www.anglesey-history.co.uk/maps/londholy.jpg

Of course, that is for a map going from one specific place to one specific other place. Still, if you simply want a local map, it might give inspiration as to the level of detail.

If you want more global maps, lisardggY seems to have the right angle.

Not the answer you're looking for? Browse other questions tagged dungeons-and-dragons eberron map-making props historical-settings .

14
Do your players make maps while exploring the unknown of your game's world?
12
How do I handle the math of hex maps?
6
Tips for creating engaging modern setting battle maps?
7
How can you use isometric maps (or other tricks for addressing 3 dimensions) for miniatures?
5
How to turn hand-drawn maps to digital
9
What material currently appears in the "Wayfinder's Guide to Eberron" that wasn't reprinted in the "Eberron: Rising from the Last War" book?