Can I create an upright 7-foot × 5-foot wall with the Minor Illusion spell?

If you create an image of an object—such as a chair, muddy footprints, or a small chest—it must be no larger than a 5-foot cube. The image can’t create sound, light, smell, or any other sensory effect. Physical interaction with the image reveals it to be an illusion, because things can pass through it.

(emphasis mine). My question is how to interpret this cube. If we rotate the cube vertically so that it looks like a diamond from the side (the cube in red in the drawing), i.e. the diagonal of the cube is vertical, then a 7ft by 5ft wall would certainly fit, since the diagonal (the blue line) is about 7ft long: 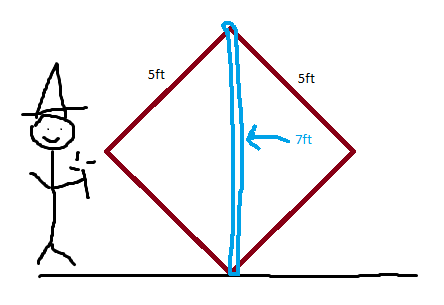 Much better drawing thanks to @Sdjz: 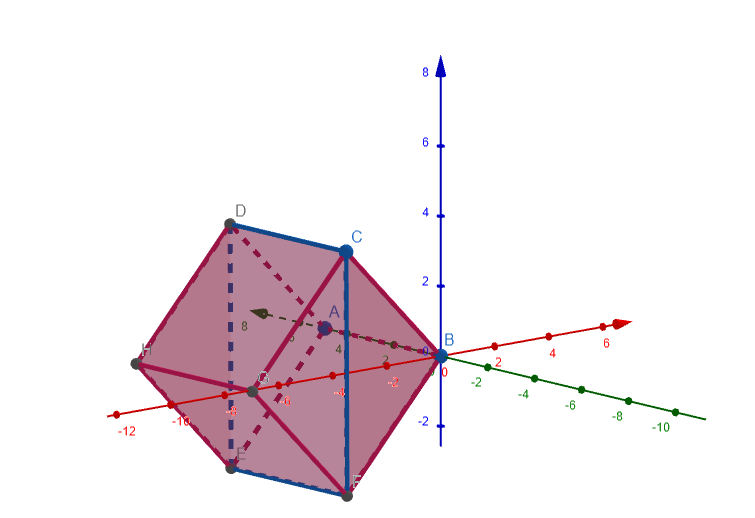 Is this "layout" of a cube valid for the Minor Illusion spell?

Note that this could potentially change the argument of the answer to "Can I use Minor Illusion to create a wall, hide behind it, and attack with advantage?".

Also related: How does orienting a cube-shaped spell work in three-dimensional space?

Yes, though a DM might not want to deal with abnormal spell positioning

In the Sage Advice compendium, a similar question was asked about the spell Cloud of Daggers:

Using 5-foot squares, does cloud of daggers affect a single square? Cloud of daggers (5 ft. cube) can affect more than one square on a grid, unless the DM says effects snap to the grid. There are many ways to position that cube.

While the Sage Advice article deals with a different spell, the matter is directly related to your question. To wit: "non-snapped" positioning of a spell's area of effect is legal, strictly speaking, though it might not fly with a DM who can house-rule otherwise.

The answer is technically yes.

Due to the wording of the spell, if the object (illusion) that you want to create fits within the 5 ft cube, you can use the spell to create it. However, like all interpretations of the rules in D&D, the DM makes the final decision. Especially in this scenario, the DM might decide that the theoretical cube (the size requirement) must be placed flat on the ground or something like that. What I'm trying to say, is that even if the DM allows it, they might not let it work the way that you want.

Good question. I really love that you are using your math to find loopholes in the rules; I'll have to remember to do that myself in the future. Hope this helped!

The other answers do a great job of covering the RAI perspective. If you'd like to push it further, there's also:

Rules-lawyer It for Maximum Cheese

I assume an infinitely large planar image (of zero thickness) would be out, however, as the description at least implies that the illusion is 3-dimensional and based upon some tangible object that you've actually observed in the 3-dimensional world. But if you're good at dividing by very small fractions of units then even taller and longer walls should be possible. It's not like illusory walls need any significant thickness to be effective, and you can probably argue that you've seen some quite flimsy/thin facade walls before.

You should be prepared for your DM to cite this answer to the question "Does “no larger than” imply shapability?" (or something like it) in reply.

At which point you'll have to do some further rules-lawyering to argue that the 5-foot cube constraint isn't describing the area of effect for the spell. You're not being asked to choose an existing area or object to work within or upon; you're told you can create a magical image of any object you like, subject to the constraints that it:

A tall, long, skinny wall is not volumetrically larger than a 5-foot cube and does not create sensory effects, so it should therefore be allowed.

Not the answer you're looking for? Browse other questions tagged dnd-5e spells area-of-effect or ask your own question.

29
Can I use Minor Illusion to create a wall, hide behind it, and attack with advantage?
23
Does “no larger than” imply shapability?
4
How does orienting a cube-shaped spell work in three-dimensional space?

11
When Silent Image Is Disbelieved, Is It Transparent?
4
In the Spell “Guards and Wards” is there a size limit on the doors that can be affected as per the limitations on Minor Illusions?
8
Can a “real” illusion be seen through?
20
How would something passing through an illusion of fog or mist reveal it to be illusory?
1
Is this homebrew “Mask of Illusion” spell balanced?
0
Can an object created by Silent Image be visibly hollow?
4
If an arrow passes through an illusionary wall of fire created by the Major Image spell, does it reveal it as an illusion?
4
Can Programmed Illusion respond to its environs, or must it perform the same thing every time?