Does the shape of a die affect the probability of a number being rolled?

Would both of these dice distribute the probably of rolling any given number equally?

I noticed recently that the D4 is really the only dice that doesn't "roll" and I am curious if this actually affects the probability of rolling a given number.

I am considering buying a custom D8 as described if nothing else because I hate trying to pick up D4s, but I wanted to make sure that the probability of rolling X is still the same before purchasing. I wouldn't want any form of advantage when rolling.

Because the D4 kind of just falls into positions, does that lower my chances of rolling X on generic dice? IMO the D8 should increase my probability of rolling X because the D8 can roll after it hits the surface. So any weight inconsistencies wont matter as much as the D4 where the heavy side fall first and because the bottom is complete flat, I would be less likely to roll anything that is not "the heavy side".

Statistically speaking, the probabilities of a d4 aren't affected by the shape, i.e. whether it's 4-sided, 8-sided, 12-sided etc.

This is basic statistic knowledge, but you can alternatively also verify it using sites such as anydice.com. See Sdjz's answer for details.

In real-world terms, ignoring statistics, the shape of your "d4" won't affect the result either, assuming that you use e.g. a dice shaker. If you roll with your hands only, though, it is easier to cheat with a standard d4 as opposed to 8- or more-sided d4s.

This is basic logic - if you try to throw a die in a certain way so that it lands on a specific number, you will have an easier time the fewer times the dice rolls / the fewer sides it has. Therefore, it's easier to cheat with a 4-sided d4 as opposed to an 8- or 12-sided d4, and it would be easier to cheat with a 20-sided d20 than with an 80-sided one.

Even if you don't intend to cheat, 8- or 12-sided d4s are probably a good choice.

Why, you ask? Because 4-sided d4s, especially metal ones, are notoriously murderous weapons of deadly vicious torturous vile evil death, and are probably better of being called carpet caltrops (credit goes to Korvin Starmast). These little f***ers are worse than Legos Lego bricks.

For illustration, I found the following image of a d4 on boardgamegeek.com: 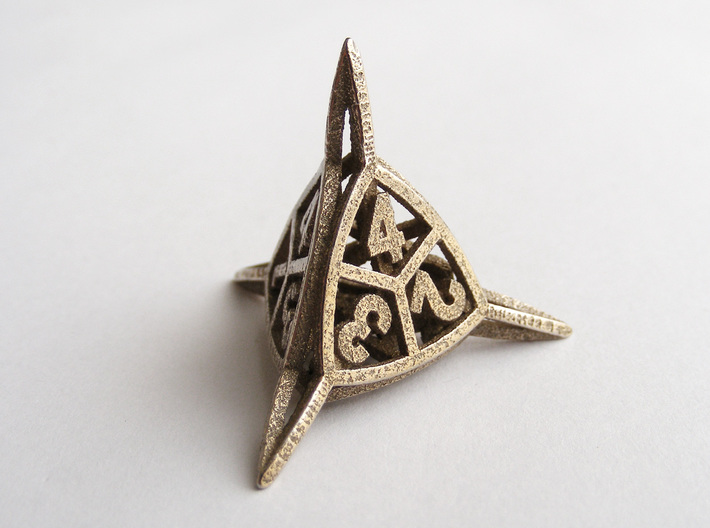 I don't personally have d4s with more than 4 sides, since I have pretty cool metal d4s with rounded corners that are not as murderous. However, a few of my fellow players have 12-sided d4s, which can be found here.
Note: I am not in any way affiliated with the linked shop, nor do I mean to advertise it (in fact, their 12-sided d4 are about their only item I would buy). It's just that, in my experience, it's not easy to find 12-sided d4 at all, and this site has them, so I want to save OP (and others) the time in finding them.

D4's don't really "roll" which has always been a puzzle

There are a couple of ways around this, which include the d8 idea that you have, and the more "rolly" d12 approach which can be applied in two different ways.

Experience with d4 disdain (aka avoiding the Carpet Caltrops)

I have had a number of players and DM's, over the years, prefer method 2 due to how that pyramid shaped carpet caltrop of death, aka the d4, doesn't roll. It also got us rolling our d12's since they don't get a lot of love in general but we had bought them with the pack.

We had a player in the 90's who hated the d4 shape - possibly for similar reasons expressed in your question - who rolled a d20 and divided by 5, rounding up. The mental math isn't hard. It worked, but as often as a d20 gets rolled already, my preference for a sub was the d12 as explained in item 2.

We had one DM in the 80's who insisted that for a d4 we hold it by the top, and toss it into the air so that it would spin, before falling. I recommend against that, thougH. If you have a large area to roll dice that can work out, but at a typical table that led to a "flying d4" problem that could knock over minis or bounce off of things and onto the floor. (And then there's the old "you'll put someone's eye out!" problem with an over exuberant tossing moment).

The "roll a rollier die" solution was generally more satisfying. Dice shaker cups (as @PixelMaster pointed out) can also help with 'rolling' the d4. @HeyICanChan pointed to another "custom" option here. (No affiliation with that site either).

Such a custom d8 is statistically equivalent to a d4

You can also see this anydice program that illustrates this:

how the dice rolls is an important factor in randomization. There is an excellent numberphile video where a mathematician explain the factors that lead to a dice being biased or not.

A summary of the video: There are many factors that contribute to randomization of dice results and the more of them are present in a roll, the better (or more random) are the results. If a dice doesn't roll you get a less random result. So you will probably have a small bias towards some numbers because of your individual way of throwing a dice.

If you want to know the details it's best if you watch the video.

IIRC there is a user on here named "seven-sided die." With all due respect to this user, the ... er ... typical dice we use are either regular polyhedra or shapes with almost as much symmetry as regular polyhedra. If you have such a die with no markings or etched numbers on it, then any face is equivalent to any other face, in the sense that you can rotate the die so that face A comes on top of face B, and when you have done so, the new state of the unmarked die is indistinguishable from the old state. The new surface coincides with the old surface, the center of mass is in the same place, and so on.

This symmetry implies that if you pick up the die without paying any attention to its orientation, and then throw it, then any initial throw you do is no more or less likely than any other throw in which the die has been reoriented to have B in place of A. Even if the way you throw is not random (e.g., you always throw your d6 from a certain orientation, with 5 on top), the physics of rolling dice is that the motion is exponentially sensitive to the initial conditions, so your choice doesn't actually influence the probabilities. There are a lot of processes that are random for this reason, including weather (on long time scales) or the fall of a pencil balanced on its tip.

This sensitivity to initial conditions could fail if the die doesn't really roll well, and that would be a reason not to use four-sided dice. (Or you could just make a habit of shaking them in your hand.) But the issue would be that a player could cheat, not that the die would intrinsically favor one side over the other if the player is honest.

Because the D4 kind of just falls into positions, does that lower my chances of rolling X on generic dice?

If the dice themselves aren't fair then it makes a difference. So pragmatically yes there is a difference between a D4 and a D8. The more faces and the more edges the greater probability of having a geometric defect in manufacturing.

100
3d6 vs a d20: What is the effect of a different probability curve?
6
Can the astrology helping die decrease the chance of success?
11
What is the average roll of a die with an expanded explosion threshold as compared to one with an expanded success threshold?
31
Does the chance of rolling a 1 in a pool of d10s increase as the number of dice increases?
5
Help with probability for a complicated dice pool mechanic
5
How can I calculate the probability of being able to purchase a card in my custom die system?
3
Converting this action resolution mechanic from total rolled to highest die rolled
1
How can I calculate the probability of complete success with this mixed dice pool using AnyDice?
38
Simulating these special dice on more regular dice
2
What are the probabilities of rolling doubles in a pool of d6s?