Does the Wall of Fire spell damage creatures on both sides of the wall?

The spell Wall of Fire has the following text:

One side of the wall, selected by you when you cast this spell, deals 5d8 fire damage to each creature that ends its turn within 10 feet of that side or inside the wall.

Does the 10-foot damage zone extends in both directions from that side of the wall?

For example, suppose I put a Wall of Fire extending from West to East. If I select the North side of the wall as the one doing damage, does that mean I can also take damage if I stand South of the wall?

After all, if I'm 9 feet South of the wall, I'm still standing within 10 feet of the North side of the wall...

Strict RAW can be read this way but is confusing

One side of the wall, selected by you when you cast this spell, deals 5d8 fire damage to each creature that ends its turn within 10 feet of that side or inside the wall. [...] The other side of the wall deals no damage.

A big part of the issue here is that the phrase "side of the wall" is not well-defined. It can refer to both an undefined area created by the wall's presence and also the physical surface of the wall itself. Both readings cause issues for this spell, RAW.

Side of wall = area reading

This is the way most people seem to want to read the spell (myself included). Unfortunately, a close reading reveals that reading it this way actually makes no sense with the way they chose to word it.

The problem with reading the phrase as being indicative of the area created by the wall's presence and not the physical surface of the wall is that it makes the phrase "within 10 feet of that side" make no sense. How can you be within 10 feet of an area that isn't even defined? Reading it this way, the spell doesn't even seem to work since there is no way to adjudicate where the effects are. Because it makes the spell not work at all, this cannot be the correct reading.

Side of wall = physical surface reading 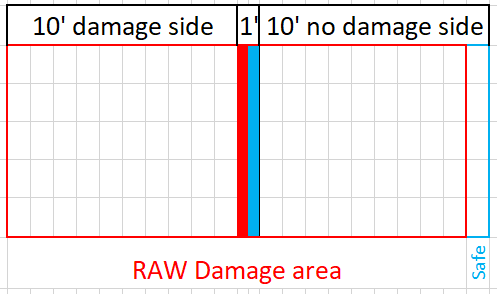 Nothing in the description says that the other side dealing no damage strictly is meant to cancel out the clause in the first sentence which says that damage is done "within 10 feet of the [damaging] side". And technically 9 feet of non-wall space on the "non-damaging" side of the wall is within that range.

That leaves a narrow 1 foot segment on the "non-damaging" side that a creature would not take damage on.

The RAW is unintuitive and confusing, and I've never seen it played that way

While by a very strict RAW reading the above ruling could be called correct, I do not think it would be wise to run it that way. At the very least, I would not and have never run it that way and I think doing so would be a bad idea at most tables.

Firstly, by the RAW reading the phrase saying the other side deals no damage has almost no use whatsoever. It creates a small 1 foot gap of safety and that is it. This is not even enough for a creature to stand in. This seems unlikely to have been the intent of the spell (though I have no proof of this). If it had been intended, the designers could have written this so much easier by omitting the safe side verbiage entirely and having damage radiate from the wall 10 feet equally in both directions. 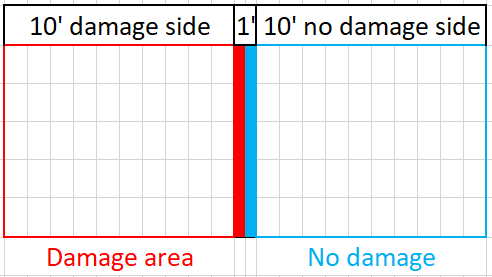 I think this is a good, natural reading for the spell and I think the RAW is straining quite a bit. Running it by RAW is a jarring diversion from this reading and this could cause confusion and arguments at the table.

The RAW also would increase the damage potential of the spell by quite a bit. Now the damaging area of the spell is almost double. This does come with the tradeoff of making it much harder for the players to use the wall for protection on one side of them in cramped areas (without taking damage themselves). It also makes it more difficult to avoid damaging allies.

Personally, I think that the RAW should be disregarded here in favor of the more common and natural reading of the spell, but your table should do whatever is the most fun for them.

It only damages creature on your chosen side (north). The spell description clearly states at the end of the same paragraph that the other side deals no damage at all:

The other side of the wall deals no damage. 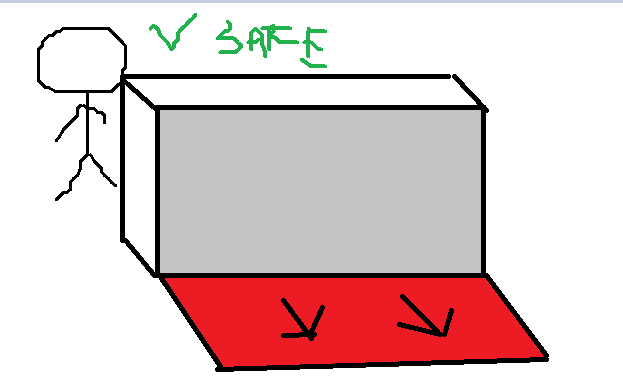 The side you chose is the red, not the grey. I can see your confusion arise from interpreting 'side' as the 'surface' of the wall. Using your interpretation, a ringed wall, meant to protect the caster inside from approaching melee skirmishers, would be useless as they will still receive the damage as long as they are within the ring. I believe that interpretation is not the intent of the 'ringed wall' use, therefore it must be incorrect.

The correct interpretation would be choosing which side to be 'front'/damaging side (read: zone). Being 'behind' the wall (the other side) automatically means you don't receive damage because you're not in the 'danger zone'.

Strictly RAW the damage only occurs on one side of the wall, it is never stated that the damage can spread around corners or cross the (internal) boundaries of the wall to support Rubiksmoose's answer.

RAW, several things are happening that could/should negate taking damage or indicate that it does not happen.

Even if you could be considered within 10 feet of the damage dealing side of the wall while on the other side (being on the safe side), it is a wall despite whatever it may be made of. The damage would need to go around the wall to hit you, so you could only conceivably be in danger of taking damage at either end of the wall.

Only one side of the wall when you cast this spell is capable of dealing damage, and if the wall is stretching from West to East then presumably the caster would choose either North or South to deal damage. The spell never explicitly states that the damage is capable of spreading around corners or through walls, and so the other three sides of the wall would be safe to stand near (even the top and bottom of the wall, so the ground remains unscorched and anything flying immediately overhead would be safe).

No, because spells whose area of effect is a line, by definition radiate in one direction only from their point of origin.

Wall of Fire is an Area of Effect spell, defined as spells which "cover an area, allowing them to affect multiple creatures at once" (see Spellcasting: Areas of Effect, and thanks to WakiNadiVellir for suggesting this approach to answering the question).

As the Areas of Effect rules explain,

With these base rules in mind, we can now evaluate the the description for Wall of Fire

You can make the wall up to 60 feet long, 20 feet high, and 1 foot thick, or a ringed wall up to 20 feet in diameter, 20 feet high, and 1 foot thick. The wall is opaque and lasts for the duration. When the wall appears, each creature within its area must make a Dexterity saving throw. On a failed save, a creature takes 5d8 fire damage, or half as much damage on a successful save. One side of the wall, selected by you when you cast this spell, deals 5d8 fire damage to each creature that ends its turn within 10 feet of that side or inside the wall. A creature takes the same damage when it enters the wall for the first time on a turn or ends its turn there. The other side of the wall deals no damage.

With that description, what is the area of effect of a wall of fire? That depends on the effect, for the wall actually has two effects and their areas differ!

The second effect is damaging; "a creature takes 5d8 fire damage". The area of this effect overlaps with the visual effect but is not the same as it; in particular it extends beyond the wall itself; "One side of the wall, selected by you when you cast this spell, deals 5d8 fire damage to each creature that ends its turn within 10 feet of that side or inside the wall...The other side of the wall deals no damage."

This description best conforms to that of a line. A spell with an area of effect in the shape of a line functions as follows:

A line extends from its point of origin in a straight path up to its length and covers an area defined by its width.

Thus, when the OP says "After all, if I'm 9 feet South of the wall, I'm still standing within 10 feet of the North side of the wall..." this is true, but what it lacks is the understanding that the damaging effect radiates only to the North of the wall, since that is the nature of a line.

Not the answer you're looking for? Browse other questions tagged dnd-5e spells damage wall .

4
Does the Wall of Fire spell damage creatures above it?
5
After a creature makes a Dex save from Wall of Fire, does it end up inside or outside the ring?
4
How does damage work when entering a Wall of Fire?
2
Can a character be hurt by standing outside of a tight Wall of Fire?