Does flanking always grant advantage, or is it up to discussion?

The rules packet does not provide any specific rules about flanking. However the rule does say that the DM has lots of leeway in deciding when to give advantage or disadvantage in combat. Should it be understood that flanking always gives advantage, or is the DM supposed to only give advantage when there is "clever flanking"? What is the best way to handle "flanking" in D&D 5e?

There is no flanking rule as a default; there are, however, a couple of optional rules proposed in the DM's handbook. It should also be noted that these are part of a general set of rules dedicated to playing using miniatures and tactical maps and even then they are marked as optional.

Flanking on Squares. When a creature and at least one of its allies are adjacent to an enemy and on opposite sides or corners of the enemy's space, they flank that enemy, and each of them has advantage on melee attack rolls against that enemy.

When in doubt about whether two creatures flank an enemy on a grid, trace an imaginary line between the centers of the creatures' spaces. If the line passes through opposite sides or corners of the enemy's space, the enemy is flanked.

An alternative optional rule offered by the DM's guide is called facing.

If you want the precision of knowing which way a creature is facing, consider using this optional rule.

Whenever a creature ends its move, it can change its facing. Each creature has a front arc (the direction it faces), left and right side arcs, and a rear arc. A creature can also change its facing as a reaction when any other creature moves.

This rule suggests the following effects:

This is arguably more complex to adjudicate and manage than flanking is.

A potential issue one could take with flanking in 5e is related to the change in Attack of Opportunity rules. Previously, circling a creature tightly, even with a 5ft reach would provoke an AoO, as you were moving through threatened squares. In order to flank and avoid an AoO you would typically need to go wide or use an ability. In 5e an opportunity attack is only provoked when you move out of a creature's reach without disengaging. In my opinion this makes it effectively trivial to flank.

As a further counter argument, keep in mind that DND 5e adds the "help" action, which can easily be used as an analogous — yet more general and less powerful — mechanic.

Alternatively, you can aid a friendly creature in attacking a creature within 5 feet of you. You feint, distract the target, or in some other way team up to make your ally’s attack more effective. If your ally attacks the target before your next turn, the first attack roll is made with advantage.

In order to create an advantage, one attacker must focus on helping via a distraction or combat engagement at the cost of not being able to effectively score a hit. However, this still gives the other attacker a far better chance at scoring a hit. This makes this more useful against powerful opponents while being unimportant against lesser ones. I feel this makes this a much more tactical choice than mere positioning, while still providing a simple and generic mechanic that feels balanced and is unlikely to be overused.

Being a playtester DM I've spent some time to make a list of all the things that grant advantage and disadvantage within the current ruleset.

The following things grant advantage to an attack roll:

Unless you apply DM fiat, flanking does not give advantage.

† Flanking doesn't count as "helping" in D&D Next. Helping is a specific action. It used to exist in previous editions (3.x) and it gave +2 to the attack roll, provided the aiding character was adjacent to both the aided one and its target. The distinction here is that helping is an action and therefore it uses up your turn. Flanking in 3.x is a passive thing that requires no action itself, just good positioning, so both flanking characters get to attack (if they have any action left, that is) and both get the flanking bonus.

There's an optional rule for Flanking in the 5th edition Dungeon Master's Guide.

The gist of it is that indeed, flanking does give advantage to each of the flankers.

In the current 5E playtest, there is no flanking. In fact, there are few rules for combat at all, and definitely no rules for grid-based combat and positioning. As stated elsewhere, the playtest doesn't represent the final ruleset, so positioning rules may be added later on, but for now, granting advantage is merely a judgement call.

Personally, I would say that it depends a lot on the situation. A normal humanoid creature being ganged up on by two assailants might be at a disadvantage, whereas as large creature, or exceptionally skilled opponent, might not have that same problem. Grant advantage on a case by case basis, and come up with a set of criteria that suit you and your gaming group.

I've had some arguments with players over 5e's optional rule for flanking on squares so I thought I would upload this image which should make it very clear. 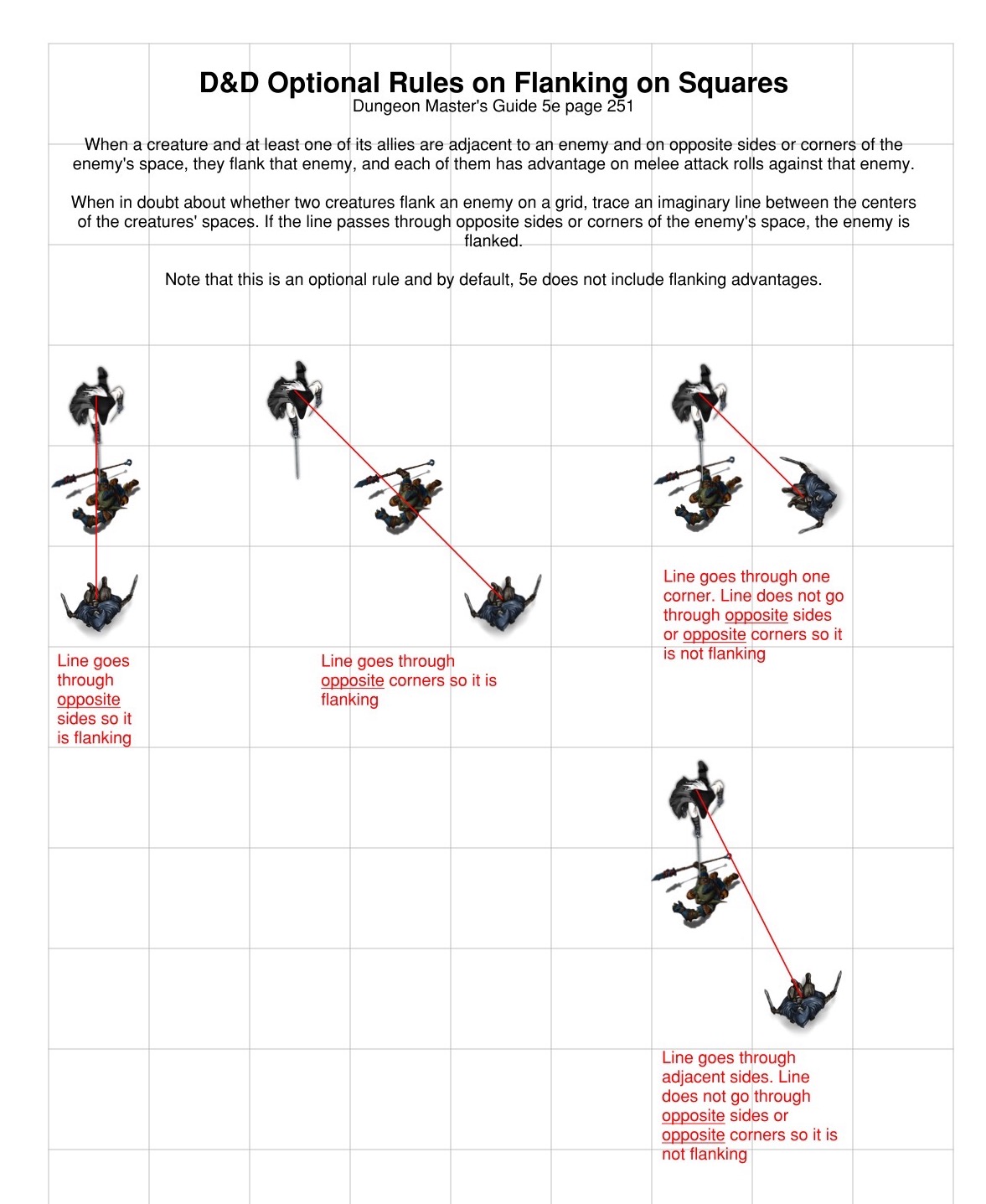 I don't believe the intent is that flanking always grants advantage, but of course all the rules aren't out yet. It seems like it's hearkening back to 1e-2e where backstab required actual stealth or other sneakniess and the rogue wasn't a DPS machine. There's nothing to indicate you can get advantage simply by flanking (it would be way too powerful for random positioning to get you 2d20 take highest IMO). It says nothing anywhere about flanking conveying Advantage so assuming it does is quite unsupported by the rules.

Not the answer you're looking for? Browse other questions tagged dnd-5e combat advantage-and-disadvantage flanking .

23
Can I get advantage against a monster when our characters are engaging it from two sides?
70
Are melee combatants limited to standing around saying "I attack"?
15
Would this house-rule that treats advantage as a +1 to the roll instead (and disadvantage as -1) and allows them to stack be balanced?
12
Should a character get advantage on a roll for attacking someone with a spell from behind?
7
Can two Large (or larger) creatures flank two Medium creatures who might split attention?
3
What would change if opportunity attacks had more triggers?

74
It seems like every skill check should always be made with advantage due to the 'Working Together' rules. Is this accurate?
19
Does a Wizard's Familiar grant advantage on every roll?
6
House rules for defensive reactions - possible balance issues?
23
Can you have advantage/disadvantage on your Initiative check?
13
Does Flanking grant advantage on melee spell attacks?
11
Who benefits from flanking?
18
Balance implications of removing unseen-attacker advantage when mutually unseen
9
When I move away from an enemy I am flanking and trigger an opportunity attack, do I have advantage on my attack from the Riposte maneuver?
13
Is there any way to actually impose disadvantage (not just cancel advantage) on saving throws against spells for a creature with Magic Resistance?