Which saving throws are low-level enemies most likely to succeed/fail at?

Related to this question: What are the most and least-resisted damage types?

I'm wondering which saving throws low level enemies are the most likely to succeed at and/or fail in encounters.

For an example, if I had the choice of six spells to use against a random enemy whose stats I have no familiarity with, and each spell has a unique saving throw, which spell has the highest likelihood of failing due to a saving throw? Which has the best chance of succeeding?

I realize the difficulty class for saving throws scales with the spellcaster's level. This is for a low-level module in which the DM had us use the point buy system from the PHB and outlawed minmaxing, so:

While I am interested in how this might change at higher levels, that's not the main focus of this question.

I'm curious because I've been told that Levitate is the best control spell... and also that spells with constitution saving throws are the most unreliable because of the high likelihood of the creature making its saving throw.

Three guesses what Levitate's saving throw is, and the first two don't count!

Using research done by platypusbill on ENWorld, namely their spreadsheet, I calculated the average saving throw modifier for all creatures below Challenge Rating 1:

As a spellcaster, most spells ask for a Dexterity, Constitution, or Wisdom saving throws, so if you had to choose between the three most common saving throws, your best realistic bet for a creature to fail a saving throw would be Wisdom. If you're considering all saving throws despite their rarity, then the most likely to fail is Intelligence.

It depends on creature type

The research linked by Kyceti is a gold mine of excellent data. I'm going to assume that it is correct as I don't have time to verify against the monster manual. Kyceti's answer draws the correct conclusions but I felt it lacked some details. So I made a copy of the data and used it to create a pivot table which you can see below. This shows the average save for all creatures of CR 1 or below, grouped by type and CR. 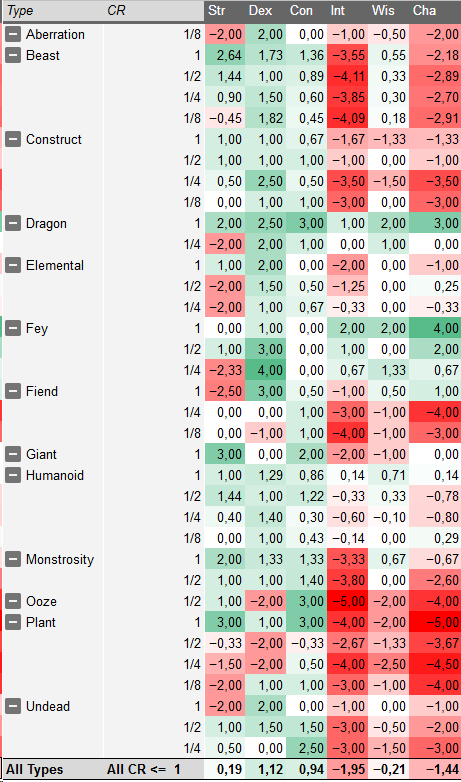 From the table above we know that the most likely save to fail is Intelligence followed closely by Charisma. In general spells with these saves are a great option.

If you find yourself coming up against Fey creatures or others where intelligence and charisma saves don't seem as effective you should fall back to Strength or Wisdom saves. Creatures with high charisma are less likely to also have a good strength save, and wisdom is the next lowest average save.

Dexterity saves are the most likely to succeed on a save, but it is also the most common save for area of effect spells. Don't let this discourage you from casting fireball all over the place.

Not the answer you're looking for? Browse other questions tagged dnd-5e monsters combat saving-throw .

107
What are the most and least-resisted damage types?
9
What is the distribution of monster save proficiencies?

11
In 5e, are saving throw results detected by the opposing party?
5
Is there a general rule for which saving throws you can repeat?
8
Are dexterity saving throws based on sight?
16
How to determine cause of death when Death Saving Throws fail due to an attack rather than a roll
9
What is the distribution of monster save proficiencies?
3
Which creature type appears most frequently as enemies in the Storm King's Thunder adventure?
4
Mind Flayer Innate Spellcasting saving throws
2
Are attack rolls or saving throws more consistent or predictable?