Does hiding behind 5-ft-wide cover give full cover?

What type of cover do you get from hiding behind a 5ft-wide (we assume it is high enough to fully cover the target vertically) tree against an opponent staying right onto opposite side?
Everything I'm asking is about square grid

DMG page 250 states that you need to draw lines from any corner of attacker's space to all corners of target's space. And if at least 2 of these lines are not interrupted by obstacle, we are getting 1/2 cover.
At the same time pictures on pg250 show that corners of cover doesn't count as obstacle. And on pg251 we see that Hex edge (I assume it also counts for squares) doesn't block anything either.

This is absolutely counter-intuitive for me, when you mechanically can't effectively hide behind a 5 foot tree against a non-moving attacker. 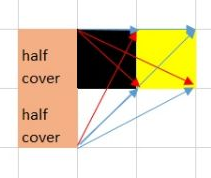 (brown squares are attackers, black is the cover, yellow-the target)

The bottom attacker obviously suffers from half cover (3/4 lines are not blocked) and the top one, surprisingly, too - 2/4 lines go through the edge of cover and are not blocked.

This is absolutely counter-intuitive for me, when you mechanically can't effectively hide behind a 5 foot tree against a non-moving attacker.

What you need to understand is that the mechanics of combat are intended to function as abstractions for what actually happens in combat. Diegetically, the combatants aren't literally standing in place, waiting for all the other combatants to finish their "turn", every six seconds. That's just an abstraction we use to keep combat tactical and strategic.

Or, put another way: if you're a creature that is benefitting from half-cover, the only way you can then make an attack is if you physically move out of the way of that cover. It may not require you to use up movement speed (if, for example, you're peeking around the corner) but regardless, it's not like a potential assailant would specifically wait for you to make your attack and then retreat before trying to make their own attack; in fact, they'd probably specifically use the moment when you pop out of cover to make their attack.

Just to be clear, I'm not talking in terms of game mechanics; under most conditions, it's not possible for a creature to make an attack during someone else's turn, without using their Reaction or some other clearly specified game mechanic. I'm purely talking in terms of Narrative Diegesis, where "turns" don't exist and everything that characters do in combat is happening (relatively) simultaneously.

But of course that makes it more difficult, hence the mechanical advantage granted by cover of having extra AC, making it harder to successfully land a shot. In this context, the +2AC granted by half-cover is the abstraction meant to explain the difficulty of timing a shot to line up with when you pop out of cover.

This also holds for other kinds of cover: Half Cover abstracts for the fact that, due to being just half cover, maybe part of your body is sticking out beyond the cover outside of your control, whereas with 3/4ths cover, maybe this is no longer an issue. Narratively, how you justify these abstractions is ultimately down to the DM, or for flavor purposes, the players themselves.

So it might seem weird that a 5-ft tree is unable to completely block incoming attacks from hostile creatures, but once you follow how combat is abstracted around cover and the use of obstacles in turn-based combat, I think it's more understandable why these mechanics work the way they do.

Sometimes, If Your Table Wants it To

Your suspicion that under the letter of the DMG guidelines it does not is perfectly warranted. There is both a reason why this makes sense more often than it seems and a reason why it is not an issue for most people.

Things are Not Generally Their Width in Squares

As you clearly are presuming, the creatures in question are not 5 feet wide, one is simply the number of 5 foot squares or hexes that they occupy for game purposes. A five foot diameter tree is a large tree; this is the width of a queen size bed we are talking about. It is probably more appropriate that a tree of that size occupy space over 4 squares somewhat like a large sized creature. A tree narrow enough to occupy only one square is smaller.

And this is presuming that you are treating landscape objects as completely filling or not filling squares, rather than drawing them on a grid in the shapes that they are in whatever natural space they occupy. If the intention is that the tree should provide cover from a parallel enemy then this can be solved completely in line with the DMG's suggestions, simply by making the tree a 5.000000001 foot circular object extending ever so slightly into other squares.

Nevertheless you do hit on the point that sometimes there is no available square behind which you could take cover behind an object which could clearly provide it but for the constraints of a grid system. A three and a half foot wide tree would provide someone full cover in real life from someone on the direct opposite side even if they moved to the edge of some sort of five foot space. This is still not a big issue because:

Cover Rules are Always Reliant on the DM's Discretion

Note that the DMG does not say the line is from any and all corners, but rather that the DM picks a corner. Hence in many of these situations (I think in all but single square cover situations) the DM is choosing whether you get cover based on what corner they pick.

But there is also no firm rule on how to determine level of cover through semi-opaque landscape features; this is always an arbitrary DM call. Fundamentally, even strictly following the DMG the DM is empowered quite a bit to make the cover calls however they damned well please (within some reason).

If the DM is using the DMG guidelines to justify giving or denying you cover that is usually a decision of theirs in how to interpret the terrain according to those guidelines.

Using Miniatures and a Grid is Optional, as is How You Use Them

While grid play honors D&D's wargame roots and has many advantages it is merely a suggested option for play with guidelines in the DMG for how to adjudicate if you choose to use it. Obviously in pure theater of the mind the DM would always just decide whether there is cover and what amount without any resort to these guidelines at all. For many people the miniatures are there as an aide to communicate the situation, make the lay of the land clearer, make it easier to remember where things are, and reduce arguments over distances and where things are. It need not necessarily be a miniatures combat game with strict rules.

The DMG is confusing in that many of the sections in the short section on miniatures and grids identifies some rules as "optional" and does not with others. However this seems to be primarily a means of differentiating their recommended approach to various combat elements you may want to introduce vs. their recommended approach to methods of adjudicating combat elements which they actually recommend. Things like "facing" are "optional" because they are choosing to be neutral on recommending the overall mechanic.

The cover rules as written are less intended to handcuff players and DMs into a particular means of adjudicating cover than to provide some basis by which a DM can say whether it should be half or three quarters cover, which naturally is a fine and potentially very arbitrary line. How closely to follow the DMG suggested method of miniature play of any sort is a DM/table decision.

If the creators wanted miniatures guidelines to be firm rules to argue and "lawyer" over they would have put it in the Player's Handbook. It is also gets confused in peoples minds because the significance of being "within 5 feet" or other distances is so elegantly communicated by the squares, and these are generally hard and fast rules. The squares or hexes themselves, and how you use them, are not, however closely we may associate them in our minds.

And anecdotally, in my own experience I have always played at tables using grids for all but the simplest combat encounters, and I have never seen one person formally examine lines from a corner (it seems the more natural impulse is to think in terms of the center of the square). The approach I've always known as both player and DM goes something like:

Player: So would I get cover if I moved here?

Player: Alright, so I'm going to move there.

It's usually a pretty effective system.

Not the answer you're looking for? Browse other questions tagged dnd-5e cover or ask your own question.

5
Hiding in a crowd / Hiding behind multiple creatures
5
Does firing a ranged weapon through a doorway give cover?
5
Should an Aqueous Orb provide cover for a creature hiding behind it?
11
How does a PC make an attack from behind cover and continue to receive cover?
39
Can I deny a counterspell by readying my spell behind full cover?
40
Does hiding under a bedsheet provide Total Cover by RAW?
12
Is hiding different when invisible than when behind total cover?
7
Is the DMG 3/4 cover diagram incorrect?
3
How to resolve multiple sources of cover when using a grid?
10
Is it mathematically possible to only have 3/4th cover?