Is this d15 verifiably fair?

Following off of a question asking for how to make a d150 in which this d15 was mentioned in an answer, I was wondering if this d15 is fair (gives an equal distribution of results over its range). Is it? 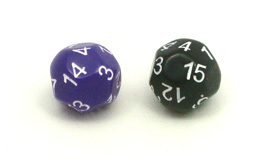 Fifteen-sided d15 die. This design is based on spacing points as equally as possible on a sphere and then cutting planar slices perpendicular to those directions. [...] Note that this design is not isohedral.

Based on the description, this die is most likely not perfectly fair

The important parts of the description are:

This design is based on spacing points as equally as possible on a sphere and then cutting planar slices perpendicular to those directions. [...] Note that this design is not isohedral.

Isohedral means that all faces of the die are identical. The fact that this d15 is not isohedral means that the different faces have different shapes. Furthermore, the method of construction described in the first sentence will not result in a fair die. Note that the points are spaced "as equally as possible". It is not possible to space 15 points out on a spherical surface exactly equally; this is only possible for 4, 6, 8, 12, and 20, which is why those dice are the only completely symmetrical ones. Hence, when the 15 faces are cut, some of them will be more distant from their neighbors than others, which gives those faces a higher chance of being rolled. In theory, it might be possible to counteract this by varying the sizes of the faces, but this would be a difficult optimization problem since shrinking one face not only reduces the probability of rolling that face, but it also makes the neighboring faces more likely to be rolled and affects the overall center of gravity of the die, which in turn changes the probabilities of every face. Realistically, the only way to get this right would be through empirical testing and iteration. That is, building some dice, testing them, making adjustments, and repeating until the dice is empirically determined to be fair to within detectable limits.

Given the amount of work that would be required to design a fair die, there's no way they would do all the work to to make a fair die and then fail to mention that in the description. From that, we can conclude that the die is almost certainly not fair.

In fact, there are other dice where the process of making them as fair as possible is described in detail, such as the d30. The fact that no such description is provided for the d15 or any of the other non-isohedral dice is further evidence that they are no more fair than the non-uniform arrangement of faces would imply.

How fair do you need it to be?

However, it's probably pretty close to fair. And if the designers are smart, they will have placed the numbers on the die in such a way as to minimize the unfairness by ensuring that the most and least likely faces are spread equally throughout the range of the die instead of clustered together in a small range. Given that, it's likely fair enough for many purposes. For example, if the arrangement of faces has any kind of symmetry to it, they could use that to make the distribution of rolls symmetric, such that the average roll is exactly 8 (i.e. the average of all faces), and that the probability of rolling over 8 is the same as the probability of rolling below 8. But if you need something truly and precisely uniform, this isn't it.

22
How I can I roll a number of non-digital dice to get a random number between 1 and 150?