Are there any feats that let you treat tentacles as arms, or arm grafts that can add arms?

Are there any feats that let you treat tentacles as arms that can be used to wield weapons, a la Prehensile Tail for tails? Alternatively, are there any arm grafts that can add to my total number of arms, either by adding an arm without replacing anything or by replacing a tentacle?

There are no feats that I'm aware of in official or officially licensed products that specifically allow one or more tentacles to be treated like hands for the purposes of wielding weapons. In fact, only a (ahem) handful of feats broach the topic of tentacles—the most interesting likely being the feat Extended Reach (Savage Species 34). In short, feats are not really your go-to here.

To compensate, I can point you to the gloves of man (Savage Species 57) (42,000 gp; 0 lbs.), the description of which, in part, says, "These magic gloves provide humanoid fingers and thumbs for the wearer. Any creature may wear them, provided the creature has tentacles or paws over which to slip them. While wearing the gloves, the creature may manipulate items as if it had fully functional hands." Expensive? Certainly. Nonetheless, despite not being a feat, the gloves do exactly what the question desires.

Savage Species on Creating an Anthropomorphic Animals says, "An anthropomorphic animal has the natural attacks of the base creature, but it can also use weapons if it did not have hands already," then it continues, saying, "If the base creature has more than two limbs, the anthropomorphic animal has the same number, but two of them become feet. Thus, an octopus-man, for example, would have only six natural attacks rather than eight" (215). I'm not entirely sure how much to read into this description: Savage Species may assume that an anthropomorphic octopus can use its tentacles to wield weapons, that an anthropomorphic octopus has two humanlike legs and six humanlike arms yet retains somehow the tentacle natural attacks tied to those now humanlike arms, or something else entirely. What does seem clear is that there's at least an argument to be made that the game thinks tentacles are already weapon-wielding limbs and that there's no need to take a feat to make them so.

There's also the example of the tako (Oriental Adventures 193), an aberration that has 7 arms according to its stat block but has "eight supple tentacles" in its description. Each of a tako's arms or tentacles or whatever is capable of wielding a weapon. 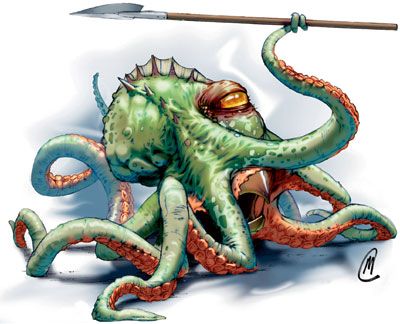 (Further, the Advanced Dungeons & Dragons, 2nd Edition illustration of the tako shows the creature clearly armed with a variety of weapons rather than just brandishing one.) So talk to the DM and confirm first that there's even a need for a tentacle to be changed by a game element so that it's capable of wielding a weapon as there's a decent argument in favor of there not being such a need.

This list is alphabetical. If in a hurry, as they have the most potential for PC use, skip to the sections on Fiendish Grafts and Undead Grafts, paying particular attention to the latter.

There are no new manipulative or semimanipulative limbs available as beholder grafts (FF 208–9), inevitable grafts (from the Dragon #315 article "Planescape: The Exiled Factions" 46 but fleshwarpers shouldn't get their hopes up as there are only two and they're both pointless and overpriced), maug grafts (FF 213–14 and acquiring them are narratively complicated anyway), pirate grafts (from the Dragon #318 article "X Marks the Spot: Setting Sail with Saber and Spell" 53–4), or silthilar grafts (LoM 215–16). Magic of Eberron includes deathless grafts (127–9), elemental grafts (129–34), and plant grafts (134–6), but these kinds of grafts—that, by the way, follow a much stricter and unified ruleset—offer neither new nor replacement limbs.

Also, compare the spare hand with the replacement arm for good-aligned creatures, the arm of Nyr (Defenders of the Faith 26) (12,800 gp; 0 lbs.). This player suspects most DMs would balk at a player trying to add to his PC's arm of Nyr a second, third, or ninety-eighth arm of Nyr, but it may be worth an ask.

Note: The writer extends his heartfelt apologies to the biologists who read this answer and yelled at their screens, "Arms have suckers along their lengths while tentacles have suckers just on their ends!" By necessity, this answer uses game terms not biology terms.

Savage Species (p. 55) introduces the Arms of the Naga:

These beautiful, silver arms hang from a harness made from top-grade leather. The arms are proportioned as if for a Medium-size humanoid. They have two "fingers" and an opposable "thumb" on each hand. The magic that gives life to the arms when worn duplicates the Strength and Dexterity of the character wearing them. In a stressful or demanding situation, such as combat, the wearer must make a Will save (DC 19) or take a –2 penalty on all attack rolls, saves, skill checks, and ability checks until the situation passes. Magic armor shifts to accommodate the new arms.

Arms of the naga do not allow additional attacks or the performance of several simultaneous physical tasks. They do not increase the wearer's reach. However, they do allow the wearer to use items designed for creatures with humanoid hands and arms. If the wearer already has arms, arms of the naga allow the use of a two-handed weapon plus another piece of equipment. For instance, a wearer could wield a greatsword while still using a shield.

Arms of the naga have hardness 10 and 30 hit points each. A character cannot remove arms of the naga from an opponent by succeeding on a disarm attempt. The arms are donned or removed like medium armor and are subject to attacks that target armor, such as a bebelith's armor damage attack, but require no proficiency to use.

However, personally I would rule that if a creature with tentacles has proficiency with a weapon, they are capable of holding it. In real life, tentacles are quite prehensile and can hold things, after all.

Not the answer you're looking for? Browse other questions tagged dnd-3.5e feats natural-weapon or ask your own question.

5
Can the tentacle created by Gutsnake be affected by Animal Growth?
2
Given several restrictions, what's the highest amount of ranged attacks a fighter can make in one turn consistently?
2
Magic item to grant hands
1
Besides a rebuild, how can you become native to Toril if you currently aren't?

6
Using more than two arms to wield a bigger weapon
6
What's the duration of these wild feats?
6
Thunderous throw and flanking
9
Is it possible to wield inapproriately large ranged weapons with feats?
6
What's the difference between Realistic Likeness and Disguise Self?
12
Can a kitsune's tail be prehensile?
7
Does a character need to add Weapon Specialization bonus damage when shooting a needle full of medicine at an ally?
1
Do creatures with multiple arms (4+) get to make a standard attack with each pair?
2
Could I quadruple-wield two-hand axes?
2
How much can changelings alter the length of specific body parts?