Would it be fair to use 1d30 (instead of rolling 2d20 and taking the higher die) for advantage rolls?

Recently I have acquired several d30 dice in a bag of factory seconds. I want to offer my players the option of using a d30 dice instead of using 2d20 dice for Advantage rolls.

The idea is that the d30 is meant to be a high-risk, high-reward option in that you have more chances to roll a high number but, as you are only rolling one dice, there is presumably more risk due to not having an option to take the highest of two rolls.

Whilst I can not find anywhere on the internet that discusses such a situation (most discussions about d30’s boil down to using them for 30-entry tables), I have found probabilities for the dice.

AnyDice is a free website that allows you to calculate the probabilities of rolling any dice and can display the results in various formats. Below are screenshots taken of the probabilities for both 1d30 and 2d20 (take the highest result) to get at least X number: 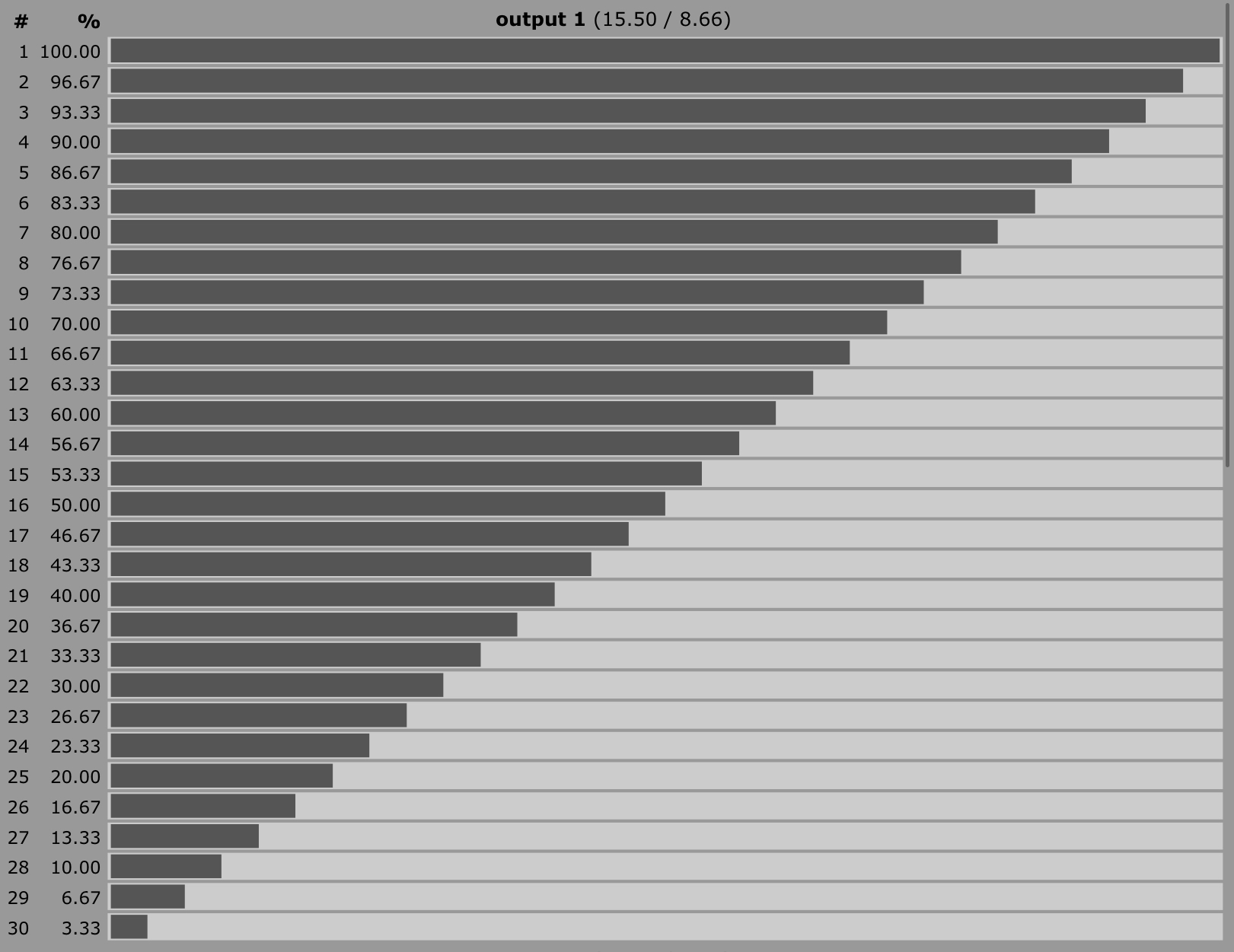 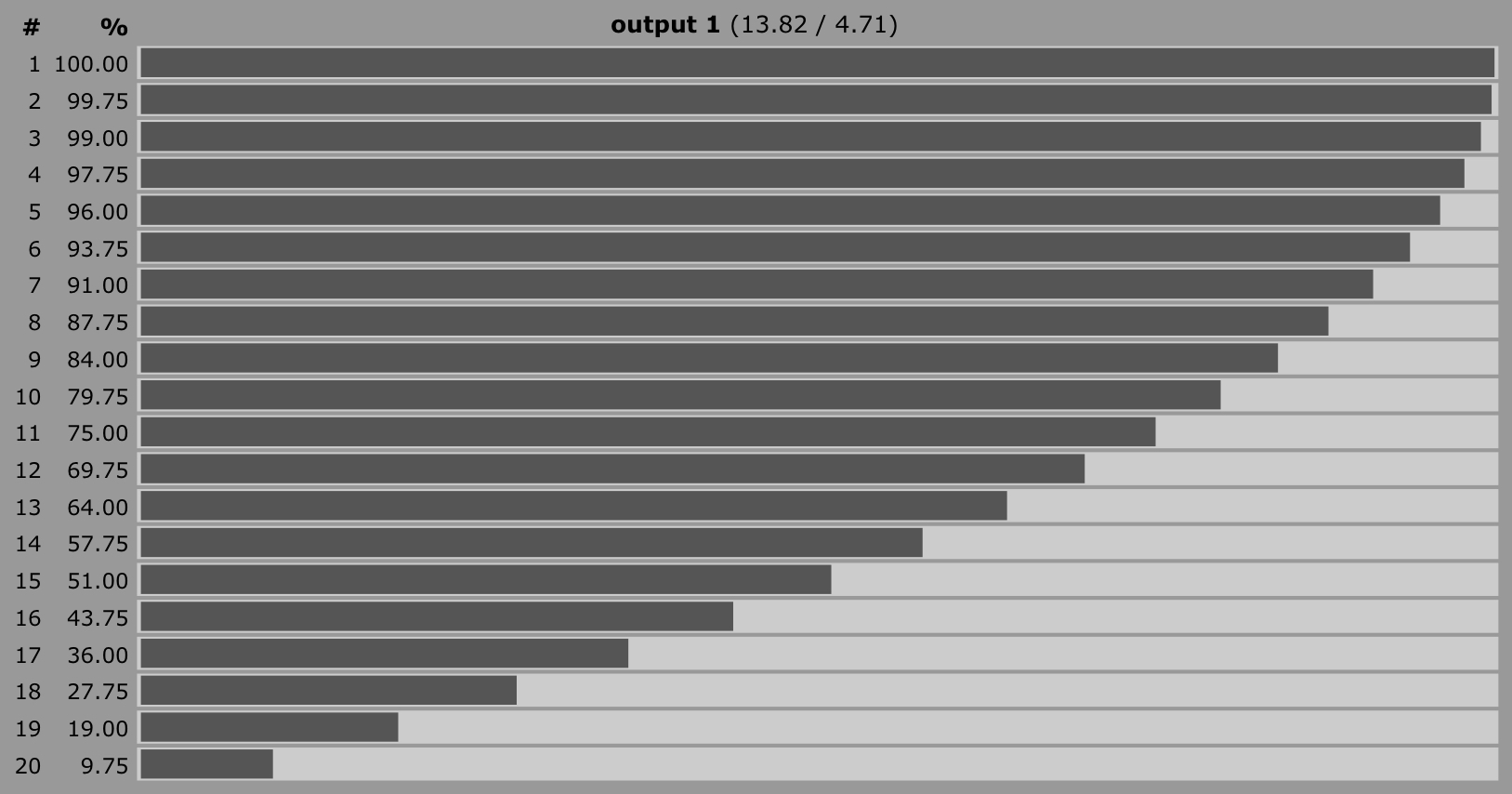 Based on this data, I want to know if it would be fair to use 1d30 in place of 2d20. By “fair” I mean whether the advantage of the d30 (there being more chances to pass any DC check due to it having higher numbers) would be balanced out by its disadvantage (the lack of an option to take the highest result of two rolls).

The best answers should, using data and examples, explain why using 1d30 instead of 2d20 (take the highest result) is either balanced or unbalanced.

As a number of people have asked what to do about rolls that exceed 20 and critical hits, I feel obliged to provide some clarification:

Firstly, in regards to critical hits, a roll of either 20 or 30 would grant a critical hit. This increases the chance to roll a critical on 1d30 to 0.066, making it so there is more chance to score a critical than on a regular d20 roll, which has 0.05 chance to get a critical hit, but less than 2d20 (taking the highest result) at 0.0975 chance.

Whilst this means you are less likely to score a critical with a d30 as opposed to 2d20 (taking the highest result), you have an extra ten numbers with which you can beat a check with, you have a 36.66% chance to roll 20 or more on a d30.

Secondly, any rolls above 20 on the d30 are equal to 20. This does not mean that all over 20 rolls are critical however, a number that was rounded down to 20 is not a critical hit (unless it was a 30 before rounding it down, in which case the strike is a critical due to initially rolling the 30). This makes it so a character can’t use a d30 to pass a DC30 check without modifiers or any other kind of bonus.

In relation to anything that increases the critical hit range, such as by expanding the range for a critical hit to 18-20, the numbers 18, 19, 20 and 30 would all count as being critical hits in this example. Whilst yes, this would mean you are less likely to score a critical hit with the d30 (13.33% compared to 15% on the d20 if the range was 18-20), this is balanced by having more of a chance to hit, as mentioned earlier.

You're using ways of determining success/failure using methods yielding different probabilities. For this reason it's not fair/balanced.

That being said, let's do a more detailed analysis of the probabilities of achieving a certain result using both methods.

The table below shows the probabilities of achieving at least a certain result with both ways of determining the outcome.

Note that only for required rolls of 15 or higher the d30 is actually preferable. 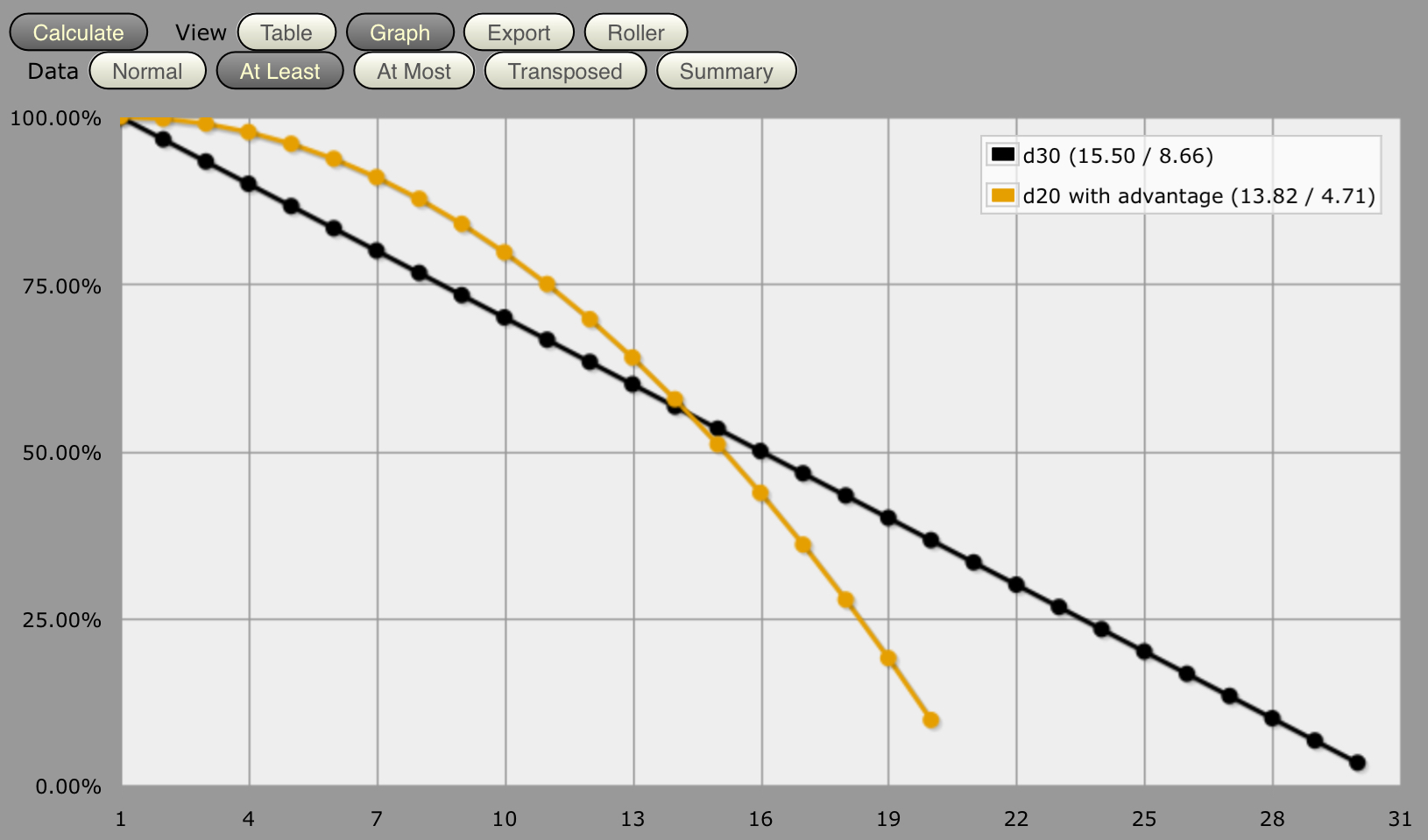 For attacking the chance of hitting is usually 50 to 60% making you hit it 9 to more than 11% less likely to hit the target in addition to decreasing the probability of a critical hit by about 6.4%.

Using the d30 option is only be prefer preferable for difficult ability checks requiring a roll of 15 or higher.

No, because you're breaking bounded accuracy

Rolling a d30 would let you achieve results far beyond what the character can normally achieve. D&D 5e's 2d20 advantage mechanic specifically prevents this.

D&D 5e follows a design philosophy called bounded accuracy, where the range of numbers a character could roll is intentionally limited. Part of this is the Advantage/Disadvantage mechanic, which elegantly modifies the likelihood of success without changing the range of numbers you can roll.

Compare this to D&D 3.5, where advantageous situations simply gave you a numerical bonus or penalty, and multiple conditions could even stack. A wizard with +5 to Knowledge (Arcana), who can normally not exceed DC 25 check, could acquire numerous small bonuses and make DC 30 check, which is normally beyond their capability.

In short, the problem with using a d30 is the 21-30 range, which makes the impossible possible. D&D 5e's rules assume you aren't supposed to roll that high, and it will create unbalance as a result.

Also, the d30 is really weak in practice

As per fabian's answer, the odds of rolling under 15 are actually worse with a d30 than with 2d20. It's only statistically beneficial on the hardest 30% of d20 rolls. In fact, it's even rarer than 30%, since AC and save DC are disproportionately likely to cluster around average rolls (e.g. 1d20 plus bonuses against 11 - 17).

This means the d30 is usually weaker than 2d20. Worse, this discrepancy isn't immediately obvious to players, who probably haven't performed a statistical analysis on the rolls, and will be working from too small a sample set of rolls to reliably measure trends. The result is that it's not fair.

But if you do tell them the odds, then the optimum solution is to always choose the d30 when making a known hard roll, and always choose 2d20 against an easy roll. The result is that the d30's weakness can be ignored, so its benefits are not balanced.

Using the wonderful graph generated by @IlmariKaronen, I want to specifically address one particular point in the question:

The idea is that the d30 is meant to be a high-risk, high-reward option 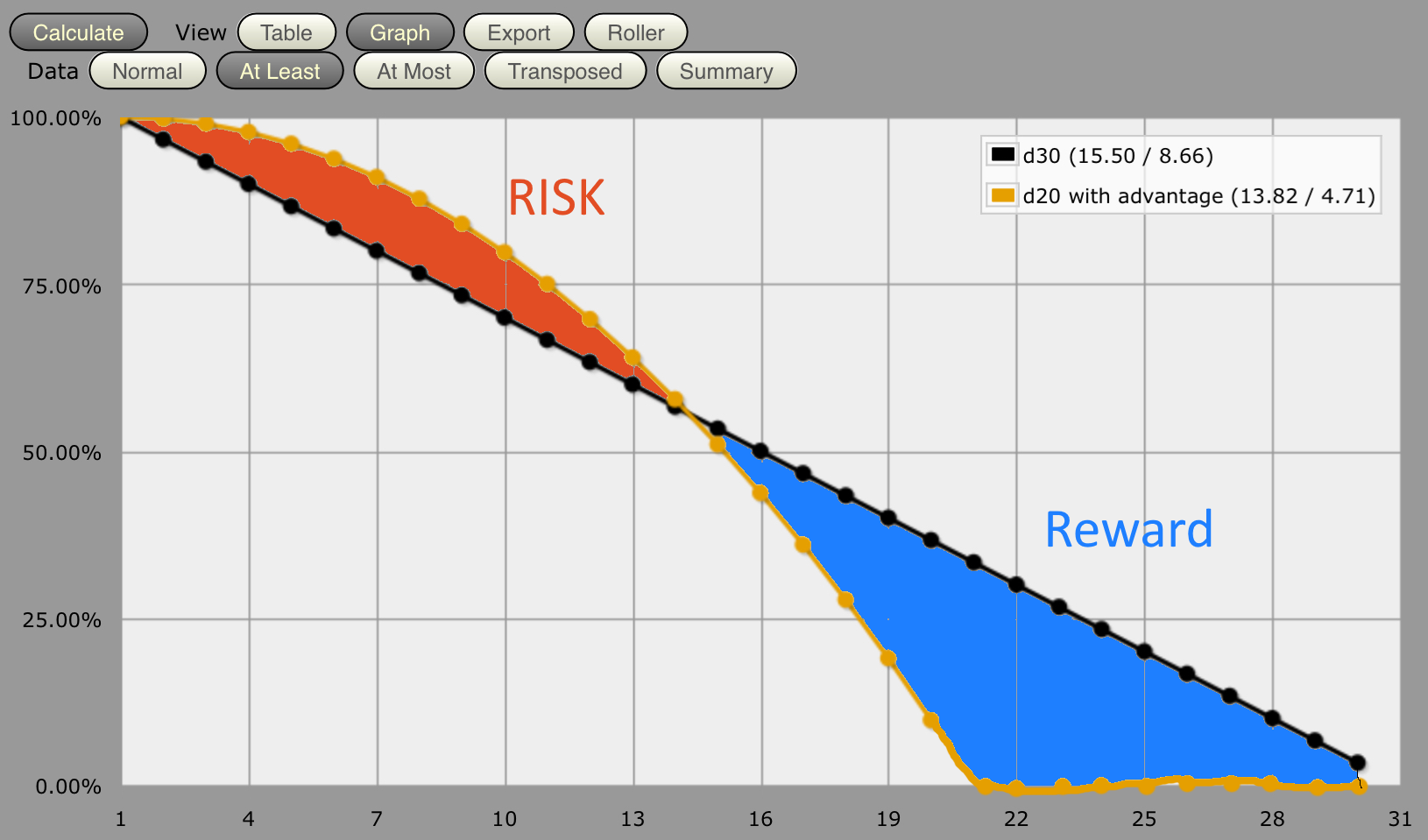 It's obvious without calculations that the blue reward area is much larger than the red-orange risk area. So, I think "low-risk, high-reward" is a better way to describe the d30 option.

Of course, the other answers make excellent points about bounded accuracy, and that if you know the threshold for the difficulty check you can make easily make the correct choice (with d30 being better for anything >= 15).

(I would also note that, since the die rolls are discrete, area isn't quite the right notion---we'd just want to sum the differences at each point. But it communicates the point effectively, so I'm leaving it as-is.)

High-Risk, High-Reward is the wrong way of looking at it

You claim that this method is high-risk, high-reward, since it has more variance. Other people have gone into the maths of this more, but I'd like to address this point specifically.

A great example of high-risk high-reward in D&D is a barbarian's Reckless Attack. Attacks against them are more likely to hit for a round - the risk - in exchange for their attacks also being more likely to hit - the reward. You can see how they trade a gain for a greater risk.

Now, the vast majority of d20 rolls in D&D are binary - they succeed or they fail, and they don't much care about the roll apart from that. This means that a choice between two rolling systems, on a given roll, cannot create risk. All they can do is alter the one probability that you care about, and that will either be strictly good or strictly bad, depending on the roll needed.

Thus, choosing what to roll each time does not create the dynamic you want, but rather just bogs down the game with decisions and DC-guessing. You could implement this system on a character level, where each player chooses one option and sticks with it, but this doesn't jive well with high-risk high-reward either - note how Reckless Attack is a choice each turn, because sometimes you don't need the reward, and so you don't want to take the risk. And aside from anything else, having different players using different dice systems is worth avoiding, especially if one comes to be perceived as better and the players using the 'worse' one come to resent this.

It's a bit underwhelming

The updated question states that numbers are clamped to the 1-20 range and details a method for determining criticals that yields a lower chance than the standard 2d20 method. This pushes the d30 option from "situational, but potentially interesting" into "too niche to really be useful" territory.

While it still yields better odds on rolls that require a natural 15 to 20, that advantage alone isn't enough to balance out the increased chance of failure on all other rolls.

As has been pointed out many times before, allowing players to freely choose one of the methods for each roll will (after the players figure out the odds) result in the appropriate method being chosen based on the DC. Due to the d30 option being mostly inferior, a clever player won't pick it in situations where the ability to switch back and forth is limited or the DC is unknown.

Furthermore, the added complexity in determining the result of the roll and/or critical hits (as well as communicating these new rules), while not great, might be enough to dampen players' excitement about rolling an unusual die for some of their checks.

Not the answer you're looking for? Browse other questions tagged dnd-5e balance house-rules statistics advantage-and-disadvantage .

2
Is there a general rule of take the average or roll the dice?
5
Help with probability for a complicated dice pool mechanic
11
Advantage on damage rolls - is it still balanced?
11
Instead of rolling for every creature hit by a spell, can we reasonably use a single additional die for the number of hits?
10
How can I calculate the sum of 2 random dice out of a 3d6 pool in AnyDice?
25
How to approximate decaying probability distributions with few dice?
4
AnyDice: How to calculate opposed roll probabilities for an unusual mechanic
4
Modeling a system where you roll Xd20 and take highest, plus the second highest if the first one is a critical, etc
7
What is the probability distribution for CthulhuTech rolls?
25
What is a decent dice rolling strategy for partial/half advantage?