Can a flying character can use Ant Haul to carry another character?

One of my player is a level 8 Oracle of Flame and she has the revelation Wings of Fire. She is not strong enough to lift someone while flying. She would like to. She plays a Peri Aasimar with a strong angelic savior behavior. 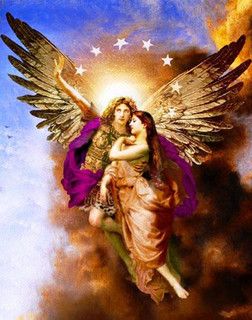 As an Oracle, she could learn Ant Haul.

The target’s carrying capacity triples. This does not affect the creature’s actual Strength in any way, merely the amount of material it can carry while benefiting from this spell. It also has no effect on encumbrance due to armor. If the creature wears armor it still takes the normal penalties for doing so regardless of how much weight the spell allows it to carry.

As DM, I plan to allow it. Now, I would like to know if it not a big deal if I consider that the amount of material includes a living being.

Ant Haul says that "the target’s carrying capacity triples", meaning that her carrying capacity, assuming that if it's triple is enough to carry all their gear plus the carried creature and their gear too, shouldn't be affected by the fact that she is flying, other than reducing her speed and increasing her armor check penalty.

If three times her carrying capacity is still not enough to put her under Heavy Load, then she cannot freely move while carrying that weight, and should probably fall (GM Fiat) or drag the creature at 5 feet per round (see Lifting and Dragging). If she has 10 Str for instance, her maximum load is 100 lbs (~45Kg), or 300 lbs (~136Kg) under Ant Haul, which should be enough to carry someone else.

Not the answer you're looking for? Browse other questions tagged pathfinder-1e spells flight encumbrance oracle or ask your own question.

6
Does Muleback Cords' effect apply to something/one slung over my shoulder?

9
On weight limits of characters according to strength. Can a character carry his own weight?
5
Does Ant Haul let you drag more stuff too?
17
How much weight can an Aarakocra carry when flying?
11
How much can you carry using the Fly spell?
2
How much weight can a backpack carry?
17
Can a flying character choose to fall, and then use a reaction to stop falling before hitting the ground?
15
Can someone flying with winged boots/boots of flying carry someone?
7
How much can a raven carry during flight?
1
How much can an intelligent item with the fly ability carry?
7
Can you carry someone while levitating?