Can characters escape from Death House through this method?

I will be DMing the Death House adventure very soon. Because I have players that tend to exploit every little loophole, I am wondering the following:

Once the party refused to sacrifice someone and have to escape, would there be an easy escape route by climbing up through the trap door opening in the basement, then going through the wall near the exit and then getting out through the front gate?

To illustrate what I mean, here is a map with the escape route I'm thinking of: 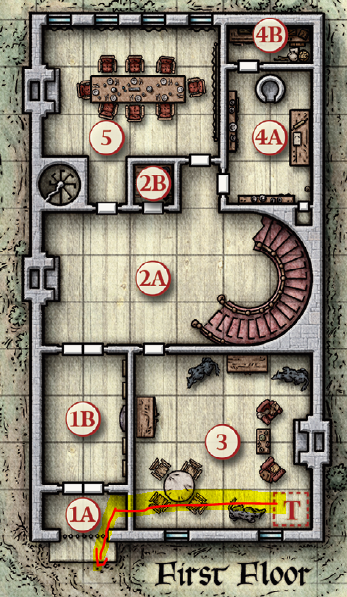 As written, once you re-enter the house, all doors will become scythes and all windows will become bricks and inner walls will become brittle and turn into rat swarms. But, there is nothing written about the front gate and whether the wall next to it, is considered an outer wall.

In someone's notes, I read that the only valid escape would be

Is that really true?

I mean, of course it would be up to me to decide and most likely it would be too easy to just shortcut in the first floor, but I think it still could be argued nonetheless and I want to be sure I didn't overlook anything.

But it's still not easy. You've got to get from location 38 to location 32 in the basement (assuming you even know location 32 exists). Once you're there it's clear from the text that the trapdoor is intended to allow movement from the basement into the house proper.

Then when you're up in the house you're in a poisonous-smoke filled room whose walls will burst with rats when you try to hack through them. It's a shortcut, but no cake-walk.

Valid, but unlikely unless they have meta-knowledge.

But, there is nothing written about the front gate and whether the wall next to it, is considered an outer wall.

Nothing written, but note the relative thicknesses of the walls on the map. I think we can assume that exterior walls are indicated as being thicker than interior walls. Thus, the north wall of the entryway (to the left as you enter the gate) would be an unbreakable exterior wall while the south wall (to the right) and east wall (in which the door is set) would be breakable interior walls. This also makes sense in that the stone or brick parts of the house would be the exterior shell and then the interior walls would be framed in wood.

You say your players like to exploit loopholes, but does that include reading the module beforehand?

In order to use that route, they would have to:

I've run Death House twice. The first group never found the trap door. The second group did, and decided to use the Hunting Den as their base of operations to rest and recover between trips to the basement. They refused to sacrifice and so were attacked by the House when they attempted to leave. Here is one example of how a party without prior knowledge of the module might proceed:

Exiting the trapdoor, they found the room filled with smoke. The first character out inhaled the smoke and was then told that the smoke was dangerous and that he could take damage if he stayed in it.

That character immediately headed for the near window to break out and leave. Note that he did not know the window was bricked over because he could not see it through the smoke.

The room is heavily obscured

Upon finding the window bricked over, he retreated to the ladder, and was there by the end of his turn (before the start of the next turn - no save needed). The smoke does not go into the basement.

On the ladder, the party had time to plan. Note that they had time to do this because they had killed Lorghath - if your players have fled the sub-basement it will be pursuing them, so that they are caught between it and the House, and will have to make decisions perhaps without time to plan.

They went over their saves and movement rates and decided that the paladin could make it to the door in one round if he dropped his backpack in the room for someone else to carry. Again, they were assuming that the door would be normal because they could not see the doorway through the smoke. They also assumed that it was just this room that had smoke in it, and that they needed to get to some other part of the house.

The paladin was the first up the ladder, dropped his backpack at the top, crossed the room to the door - and found the scythes, and that the hall beyond also had smoke. Realizing that this was a bigger problem than the single room, they asked to hear again the room description, and this time picked up on the fact that I described the exterior walls as solid, but the interior walls as having their paper peeling and lathe exposed ("rotted and brittle"). The paladin ended his turn attacking the wall by the door and releasing the first swarm of rats, much to his surprise.

The wood elf monk (chosen for movement rate) went next, came up the ladder, grabbed the paladin's backpack, crossed the room, killed the swarm of rats, and made it into the grand foyer through the opening the paladin had made, ending her turn in a room without a fireplace and smoke.

After that, it was just a matter of choosing to destroy one more wall section and face one more rat swarm rather than the scythes, and they were out.

My party had the advantage of knowing about the trapdoor and having killed Lorghath, and there were still several setbacks because they couldn't see through the smoke or know what would happen.

A party COULD take the path you outline for the easiest escape, but how would they know to do that?

Not the answer you're looking for? Browse other questions tagged dnd-5e published-adventures curse-of-strahd .

9
Should I run Death House or Phandelver in preparation for Curse of Strahd?
54
My Wizard is conjuring a piece of the sun. How will this affect my setting?
16
Will this house-rule method of choosing prepared spells unbalance the game?
24
How to make sure the players escape but feel like it was because of their wit?
4
What constitutes a 'safe route' for the Fear spell?
10
How to run Death House for 3 new players with no healer?
3
What is the likelihood that my players can succeed in this escape the city scene?